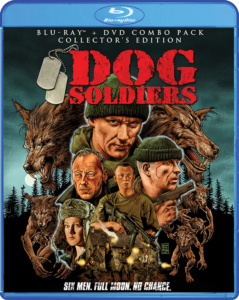 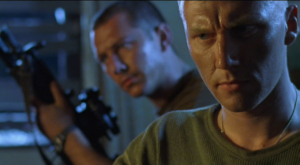 A pretty bare bones premise about soldiers in an area of the woods with giant werewolves has a few nice twists here and there, but it ultimately more tiring than enjoyable.

There’s definitely a cool premise here, taking a werewolf movie and setting around a group of soldiers trapped in a house in the middle of the woods. And there’s also an incredible look to these werewolves who are about three times the size of humans and all captured with practical effects and costumes. And yet the movie still isn’t all that great. Maybe that’s because it’s tough to distinguish between the soldiers or because once they get to the house, most of what happens just seems like a series of repetitive attacks without many distinctions. There are some cool twists in the second half, but this movie still doesn’t quite feel as exciting or interesting as it probably should.

Soldiers stuck in a single cabin for just one night. What’s not to like? You would think this would be the perfect formula for a Cabin in the Woods or Cabin Fever or Evil Dead 2 type of movie. But, in fact, this film seems to do everything to avoid that. First, it makes the cabin more of a house, meaning more rooms and less chance of us getting to know the room and feel like we are there. Then it gives us way too many soldiers, to the point where it’s tough to keep track of who everyone is, and we certainly don’t know each of them by name. And then it brings in the werewolves, which is the one redeeming factor about this movie.

In fact, it’s the main reason to see this one. Giant werewolves. These might actually be the coolest looking werewolves ever. Some movies present werewolves as just wolves. Others present them as humans who just have really hairy fur all over their bodies and face. That’s the most common way, whether it be in the Wolfman, Wolf, or even Teen Wolf. But Dog Soldiers takes it to the next level. It gives us werewolves that are about three times the size of humans. They stand on two feet like humans do, but their bodies and heads tower over our characters. The look is amazing. It is absolutely the one cool thing about this movie.

The way all of this is accomplished is by practical effects. No computers, but actual costumes, like the kind Jim Henson used to make (only more gruesome and menacing.) These creatures are so big that humans can’t even get inside the costumes and reach the faces or mouths. You can tell this because the mouths never open. And yet, aside from one quick shot where that is obvious, the movie hides it pretty well. It never really shows us the wolves up close for more than a second. When we do see them for longer amounts of time, it is from further away, and so we don’t notice their mouths not moving. It would have been cool if they put a person on stilts and had him get up there and work the mouth for one or two quick shots, or even if they had done the mouth part down on the ground, but the movie still does a pretty good job of hiding that and making these creatures look semi-real. It is certainly a far better effect than we would have gotten if they used computer effects (which would have meant the werewolves would have looked more like drawings and moved in ways that didn’t seem real.)

So now let’s get into the story. The movie is about this group of soldiers who are trapped in this single location. But it doesn’t start that way. In. fact, it doesn’t even start with the group of soldiers themselves, but with another group, a special unit of some really shady characters. This unit is led by Captain Ryan (Liam Cunningham of Game of Thrones,) and  they are doing a training exercise where they see how long it takes them to catch and capture one of their men. That man is Copper. Her evades the other members of the team for longer than anyone else has ever done before. Clearly he is a skilled soldier. And so Ryan gives him one final test. Shoot a dog. If he does that, he gets the job and is given a place in the unit. Only Cooper refuses. Ryan then takes his gun and shoots the dog.

Cut to some time later, and Cooper is part of another unit. Yes, this is confusing. These guys are more jokey and kind. You can tell right away. For one thing, they aren’t killing animals for no reason at all. And we stay around a camp fire with them one night while their captain, Sgt Harry Wells (Sean Pertwee, the actor who played Alfred on the show Gotham,) tells a story about a friend of his who got a tattoo and then got blown up, leaving the piece of his body with the tattoo on it in tact. The scene is meant to help us get to know the characters, and maybe it would have if more if them got to speak and show a little bit of their personalities. Instead, all it really does is establish the character of the Sgt, who is telling the story.

That story gets interrupted when the carcass of a wolf falls on them and sends the men running. Soon they are being attacked by wolves in the woods. The Sgt gets clawed in the stomach to the point where his guts spill out. And somehow they manage to put them back in and get him on his feet running again. They also come across the dead bodies of a ton of soldiers who have been attacked by something. And then they find the one member of that squad who survived. Guess who it is? Ryan. The bad guy from the start of the movie. They now take him along with them. And that’s when an SUV pulls up, driven by Megan, a woman who just happened to be out there when they were, and picks them all up.

Megan takes them to the secluded house / cabin, where they situate themselves. They keep Ryan tied up until they get answers from him, and set the Sgt up on a bed in an upstairs bedroom. And then they meet in the downstairs living room / kitchen to discuss what they are involved in. And this is pretty much the extent of the rest of the movie. They stay in this small area and get attacked by the werewolves from time to time. The location is great, but there just isn’t enough that happens here. The attacks all pretty much feel the same and there’s nothing to differentiate one from the next.

But luckily the movie still has more up its sleeve. It has two surprises from two different characters. Without giving away who those characters are, it’s safe to say that both are relatively predictable. You don’t know what’s going to happen with these characters and exactly what their secrets are, but you know that there’s going to be something. Thankfully the movie does not disappoint when it comes to that. In fact, one of the secrets in particular, involving the group of werewolves themselves, is pretty exceptional. And you have to think that it could have led to so much more. Part of it is that we learn that the werewolves do turn back into humans. So why don’t we ever see that. Can you imagine how much more we could have gotten if the werewolves weren’t just basic attacking monsters but also used human form to go at and deceive our main characters? I suppose we do get a little of it with one of the twists, but there could have been so much more.

And then there’s the garage, which is some distance away from the main house. Thank goodness for this additional location, because if not, the characters would have been even more limited in terms of not only location, but also story. There is a car in the garage, and the characters have a number of plot points that deal with this. First, they try to get to reach the garage in order to get to the car and bring it back to the house. And then, once they find out the werewolves are all hiding out in the garage, they decide to set the car on fire and use explosives to drive the car into the garage and blow the whole place up. Now, the idea of blowing the garage up if the werewolves inside makes sense, of course, but why use the car? Why use the only means they have for escaping this place? That doesn’t really seem to make much sense.

Dog Soldiers is an okay movie. The twists in the second half help it along, but for the most part this movie feels like mostly the same thing happening over and over. The characters don’t have enough distinctions between them, and that’s a problem. If you look at any of those cabin movies, one of the main components is that the characters are all unique and easily distinguishable (which is the reason why there is always a blonde girl and a brunette girl – making it easy for the audience to distinguish.) Here, there are no attempts made to do that. The beginning with Ryan is pretty cool, especially in the way that these characters come back into the fold later on, and the wolves look fantastic, but this is movie still manages to be tiring due to all of the repetition. It needed to concentrate harder on the story, the thrills, and making the characters more distinct.