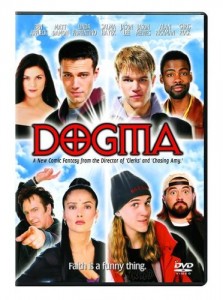 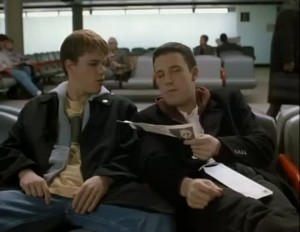 A lousy comedy about organized religion that seems more about finding roles for as many actors wanted to be in it, than it does about telling an interesting or funny story.

Dogma might be a comedy that takes on organized religion and makes fun of it and all that, but that does’t necessarily make it good. It’s also a movie that’s meant to cash in on the matt damon-ben affleck craze of good will hunting, (Made shortly after that film). For those actors, it’s them returning a favor to director kevin smith. he’s the guy that got their script for good will hunting over to the big guns at miramax and essentially got their film made. In that sense, he could also be seen as the guy who jump started their careers.

So they pay him back by starring in this lousy movie, with no regard to the script or ideas. And smith takes his opportunity to have not only these two stars at the height of their game, but an all-star cast surrounding them, and he blows it. Big time. The cast includes George Carlin in one of his final roles, alan rickman, chris rock, salma hayek, linda fiorentino, and jason lee. It’s no ocean’s eleven cast, but it’s still pretty good. certainly the best kevin smith’s ever been given to work with.

The problem is that the story and jokes are just stupid. A woman named bethany (linda fiorentino), is recruited by an angel (Rickman) to go to new jersey to stop two angels from entering a church. How she’s going to stop them is never explained. Instead, this movie is busy trying to find ways to get every actor under the sun into a role somewhere. So Chris Rock is an apostle and Salma Hayek is a muse and jason lee is the devil. Jay and SIlent bob, smith’s returning champions, are even on hand as jay and silent bob the prophets.

And that ends up being one of the biggest problems about the film. Those two guys have always been backup, cameo material. In clerks, mallrats, and chasing amy (the Kevin Smith new jersey trilogy) those two made only tiny appearances. In Chasing Amy, the best of the bunch, they appeared for just one scene to give a little monologue of advice to the main character. And they were great in these small roles, popping up as a little extra bonus. But now, all of a sudden with this movie, they are main characters. They travel alongside the film’s star, linda fiorentino and accompany her the whole way as she meets Rock, Hayek, Lee, and everyone else. And Smith’s follow up to this movie, Jay and Silent Bob strike Back, had them as the absolute stars of the film. All of a sudden these two cameo appearance guys have a whole movie to themselves. Ridiculous. They are given way too much screen time in Dogma, and instead of smart humor, we get the same repeated, tired jokes.

Overusing jay and Silent bob is but one of the film’s many mistakes. Another is that it really doesn’t have much of a plot at all, just a basic outline of ideas. We follow the two evil angels and we follow fiorentino and her entourage simultaneously. And in the end they all finally reach this church that the angels have to get into and theres a big fight. Oh, and we get to see god at the end, played by Alanis MorisetTe.

Alanis Morisette? I guess that was supposed to be funny, but it isn’t. She’s not even an actress. Maybe that’s the point, but she doesn’t say anything and seems as stupid as a four year old, doing somersaults against a tree as if its a new discovery that she can do that.

Because the film has an intended destination, but no substance to fill the in between, it ends up making stupid decisions to include some really awful scenes as filler material. There’s the one where matt Damon and Ben Affleck stop by a board room meeting of executives of a children’s theme park and they shoot every person in the room. And then there’s the shit monster, who comes out of the toilet and shoots fists of shit that explode all over the walls. It’s seriously as if this movie were written by an eight year old with the things that a child might find funny. Toilets and poop monsters. How clever.

All of these scenes are meant to fill space, so that we can get to our ending at the church. But it’s not as if anything great happens once we finally do arrive there. God shows up and kills the two evil angels. Great ending. Just to make it seem like that’s not all there is, linda fiorentino, who couldn’t conceive, now suddenly gets pregnant. Oh, and she’s the descendent of christ. How creative.

If I disliked this movie so much, you’re probably asking why I gave it two stars instead of less that that. It’s mostly because of the casting. While the material that was written for them is crap, I still like seeing these actors in these roles. George Carlin as the cardinal is a great choice. So is chris rock as the apostle. Even Alan Rickman is good fun. And Linda Fiorentino is a talented actress who never made it past movies like this or jade or the last seduction.

Aside from the casting, the movie is occasionally funny. I do like the buddy christ. That moment is hilarious. And it’s nice to see Damon and Affleck teaming up as friends again. But when it’s time to get serious about the movie, the storyline just doesn’t cut it. The great cast is wasted. Salma Hayek performs on stage as a stripper for crying out loud, and smith still manages to screw it up by bringing a shit monster out of the toilet in the same venue no less (I’m talking like smith’s characters on purpose there).

This movie is filled with holes and problems and stupid ideas. The casting is great, but without good material to work with, there’s not really a lot they can do. I loved Smith’s New Jersey trilogy because those movies had small budgets and had to be creative. Dogma is the first movie where he was handed a huge budget to work with, and boy did he screw it up. He should have stuck with what was working.