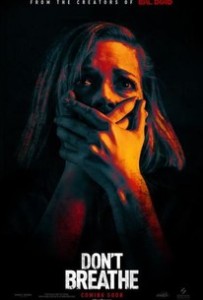 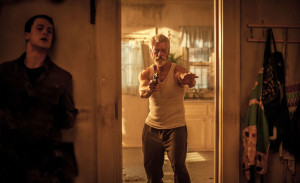 A horror movie that plays on the simplicity of its plot and limited amount of characters until we reach the second half which becomes all about plot twists and some pretty cool revelations.

A modern snd creative take on the usual horror movie of a bunch of kids going into somewhere they shouldn’t, this one gets started on the right foot immediately by having the kids be burglars. They aren’t exactly the innocent, lovable teens the horror movies generally tend to feature. Instead, this crew has an organized system of robbing houses, using the keys and alarm remote of one of their fathers who owns a home security company. Not long after meeting the characters, we are in the home of an old man who isn’t laying down to let the kids rob him. The old man turns out to be a killer and the crime at hand gets taken up a notch, from robbery to murder. There are definitely some slower parts in the mid sections of the film, but this movie packs multiple twists and they really help give the film an edge. Between the robbery introduction and the twist mid section, this movie might not work at all times, but the areas that do work are certainly enough to keep us hooked.

Don’t Breathe is the latest incarnation of a small horror movie that takes place almost entirely in a single, tiny, indoor location. Other recent films in this subgenre include Green Room and The Visit. These movies tend to be made on a micro-budget and feature a very simple and straight forward plot. And they also seem to all be creative in their own way, which means a major twist of some sort that throws a huge monkey wrench into the plot, by changing everything we knew or thought we knew about the the situation. Green Room worked because of its terrifying situation, and how far the villains were willing to go. The Visit worked because of its crazy twist. Don’t Breathe is the movie that bridges these two strengths together.  It’s a smart movie made in a subgenre that continues  to find new angles and prove to be ever full of life.

The subgenre at play here,  which Don’t Breathe exists inside of, has come a long way over the past two decades. Back in the nineties, this subgenre of teenage horror took on the nickname of slasher films. From Scream to I Know What You Did Last Summer (and all of their sequels,) these movies seemed to be everywhere. Now a days, the movies that fit the bill generally feature characters who are a little older (college or grad school age,) and surrounded by more realistic plots. There isn’t some seemingly random serial killer in a mask who manages to avoid the police at every turn. Instead, it’s the protagonists who put themselves in harms way. They do this by going into somewhere they shouldn’t, be it a night club run by white supremists, or an old man’s house that they are trying to rob. And once inside, these characters are met with a great surprise.

In Don’t Breathe, we get that old man robbery plot. What’s interesting about this one is that our protagonists are the hardly the sweet, innocent kids, that this subgenre has historically featured in the past. In Green Room, the characters’ biggest crime was that they were punks who taunted the crowd. In Don’t Breathe, this is taken up a notch. These kids are burglars. They break into houses as a routine. And the old man house isn’t the first one, but simply another check mark off their list.

The group of burgulars is composed of three characters. These are Alex, Rocky, and Money. Rocky is the strong female from a broken home. She’s nice, but rebellious, and her goal is to get her younger sister away from her abusive mom. She dreams of taking the girl with her, and running off to California. Only she needs money to do that, which is where the robberies come in. We get one scene of Rocky and her mom, and it’s enough to tell us everything we need to know about her situation.

Aside from Rocky, the other lead character is Alex. He’s the straight man of the group. Alex is the down to earth, fairly innocent-seeming character. He’s  also got a major crush on Rocky. Alex is the one who doesn’t quite fit with the others, and that’s because they represent the cool kids, using Alex for his connections. These connections involve access to houses where his father has installed security systems. Alex uses his Dad’s keys to get into the houses and then takes a universal remote from his Dad which shuts off the alarms. Then the crew goes in, using the keys, shuts off the alarm, and steals a certain amount. They know the exact amount of money they need to stay under, in order to not be considered a more serious crime, (like the Heat of simple house robbery movies, where those characters knew the exact amount of time it would take for the cops to respond and reach the site of the crime.)

Considering how cool the approach is, of how these guys rob houses, and have a leg up over most other burgulars, it would have been nice if the movie had spent a little more time developing all this. We see Alex throwing a rock through the window of a house they just robbed, as the crew is leaving, to make it look like a simple robbery where the burgulars went in through the window. This is not enough. Not when you don’t even know why he’s throwing the rock, because it’s the first scene of the movie, and you’re just trying to meet the characters a little. Still, the movie knows what it’s doing and has a clear goal in mind if getting to the d mans house as quickly as possible, so you can’t really fault them for not spending more time on introductions.

The third member of the group is Money. He’s the scum bag character who you just know is gonna bite it first. Money is dating Rocky, and he calls Alex out on being into her, doing it right in front of Rocky. During the house robbery opening scene, Money goes around smashing things on purpose, just because. And at one point he starts urinating on the floor of the house. I’m surprised the movie didn’t have him kick a dog or something, just to really drive the point home. We get it. We’re supposed to hate this guy. This way his death is a throw away situation that we don’t really care about (like a pawn,) as the movie builds up to the potential deaths of the more important characters.

And that brings us to the robbery. There’s an old man whose daughter was killed not too long ago, run over by a girl from a wealthy family. That family paid the old man off to not press charges, and he ended up getting a major settlement. On top of that, he lives on a deserted street,  in the last house in an otherwise abandoned neighborhood. And the old man’s house is secured by Alex’s fathers company. So he’s the target, and the three characters stake out his house during the daytime with the plan to go in at night. Getting in isn’t exactly easy, with Rocky having to climvb through a narrow vent, but once they’re inside, the real horror show begins.

The old old man starts killing them. He’s out for blood and takes their break in as an opportunity to wreck havoc. The movie chronicles the deaths of these characters, and has a couple of cheap tricks, like fake out deaths. But the big surprise more than makes up for them. And it’s a two fold surprise. First you find out what the old man is up to. Then you find out why. This is a movie where the twist actually makes the movie. It’s clever and crafty and completely unexpected.

Don’t Breath ends up being a pretty cool movie. There are three parts to this film and two of the three of them are great. The first part is the robbery setup, where we learn about this team and how they pull off the robberies. Their unique way of getting past things like locks or alarm systems is pretty cool. The second part is the actual house robbery of the old man. This is the part that could have been a little stronger, and seems pretty routine for a while. But then we come to the third part, which is the twist, and boy does it shake things up. It’s not a final end of the movie twist, but more of a halfway point kind of thing, which is good, because it allows time for the ramifications and consequences of it to really develop. This is definitely a movie where the twist makes the movie and gives it that powerful, razor’s edge, that the film otherwise would have been lacking.