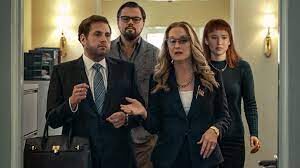 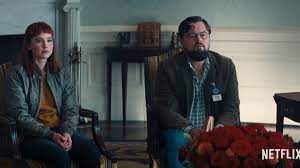 A very funny, scary satire about what our world is like and what it could become.

Now this is how you make a political comedy. Don’t Look Up is a satire of life in the White House, the division between the two political parties, and how much the media gets involved in popularity stories. The movie is also about science and how one side can be intentionally looking the other way, while the other side is practically screaming that people should be alarmed. Everything here is amped up quite a bit, so that even the initial premise isn’t about global warming or the pandemic or anything that is really happening, but instead is about a comet coming to earth. It’s an ingenious idea, and the performances here by A list talent are what really take it over the edge. What a lively, funny, and also somewhat scary movie.

Don’t Look Up is a star-studded political comedy that takes on Global Warming and Covid and any other serious science issue facing our planet that one political party supports doing something about, while the party is against. It’a a very weird place that we’re at in our lives and times that one party has gone out of their way to show they are pro science, and the other party anti-science. But that’s where we are, and this movie goes after these ideas head on. It features a female president who is not unlike Trump, as a team of scientists tries desperately to get through to her and her son, Jason, that a comet is coming, headed directly toward earth, which will be q “planet killer.”

Let’a start with the comet itself. While clear that is meant to be a reference to global warming, (and has become even more relevant now since Covid and mask wearing,) it is also a metaphor for something big and drastic headed right toward earth and people being so naive that they don’t want to pay attention to it. They want to ignore it. And so, at one point in the movie when the comet becomes visible from down on earth, the President urges people, “don’t look up,” telling them that the democratic party is looking down at them, thumbing their noses as them, so they, the republicans, should also be look down, right back. Now, of course, the movie doesn’t say democrats or republicans. It’s smart enough not to make such a grand gesture as that which could turn half of the country off to seeing it (I have heard from Republicans that they love this movie, while wanting to ask “do you realize it’s about you?” But of course, holding my tongue.)

The ways that the president is like President Orlean (played by Meryl Streep,) are definitely pretty obvious. First, is the fact that Orlean’s son is the President’s Chief of Staff. This is something that Trump did with his sons, his son-in-law Jared Kushner, and even his daughter. Secondly, there are the scandals. In this movie, President Orlean was caught sending naked pictures to a judge. In real life, Trump’s sex scandal involved a porn star (that’s right, in that case the real thing was even bigger than the movie.) And a third way that this President Orlean is like Trump would be the rallies she holds. They a big and ridiculous, and filled with people who think she is a god, and will believe anything she says, even if it defies common sense.

And now for the story. At the start of the movie we are with PHD Student Kate Dibiasky (Jennifer Lawrence,) as she sits in a lab at her school looking through a telescope, listening to a rap song, and taking notes. Kate has died hair and a nose ring, and meant to be representative of youth culture. She sees something in the air that doesn’t quite look right and calls in her professor, a man named Mindy (Leonardo Dicaprio,) to take a look. Mindy and Kate and a few other students now gather around celebrating that they have discovered a comet which will be named after Diabasky. But then they notice something else. It’s moving in an unusual way. Mindy charts its course and determines that it is headed for earth.

At this point, they contact NASA and get the head of NASA’s Planetary Defense, Teddy Oglethorpe to join their cause. Now the three of them setup a meeting with the White House. It’s an emergency meeting, and so the three of them are ushered in the very next day. Only once inside the White House, it doesn’t seem like the President or her staff are taking this very seriously at all. They are asked to sit in a lobby waiting area all day as they watch the President having light-hearted fun meetings in the oval office, like celebrating someone’s birthday. The five-star Pentagon General who acts like he’s on their side brings them snacks and then tells them it’s ten bucks a piece. They learn later that the snacks were free. And by the time nightfall arrives, they are still sitting in the lobby only for the President’s son, Jason (Jonah Hill,) to pop his head out and say that it’s not gonna happen today, and they will be put up in a nearby hotel, with the intention of having the meeting tomorrow.

The next day, they do have the meeting, only it doesn’t exactly go so well. The President seems less than interested. She acts like the purpose of the meeting is to congratulate these astronomers on a nice find, saying things like, “oh, good for you.” Jason seems like he’s there just to give them a hard time, whether it’s being bored by Mindy’s explanation or just throwing insults at Dibiasky left and right. And by the end of the meeting, the result is the President’s decision to just “sit tight and assess.”

This triggers Mindy and Dibiasky to go on talk shows about their findings. Particularly one show hosted by Cate Blanchett and Tyler Perry, two characters who are all about the jokes and Reid nothing seriously. When the comet is mentioned by Mindy and Dibiasky, the hosts make quips about whether or not they can get it to land on Tyler Perry’s ex-wife’s house. This is when Dibiasky freaks out on the air and has one of those Network, “I’m mad as hell, and I’m not going to take it anymore,” moments. Except instead of being seen as a hero, she is viewed by the public as a lunatic, and even hid boyfriend dumps her. And then writes an article all about her.

Mindy now gets seen as the sexy scientist (An AILF for astronomer, instead of MILF.) He starts going on shows by himself. And when he and Dibiasky get calls into the White House for a second time, it’s because now the President believes them. Or as Dibiasky figure out, it’s because President Orlean got caught doing something by the media and is now trying to use the comet as a diversion. And so they put a mission in place which includes a veteran astronaut, played by Ron Perlman, who will take a rocket ship into space to blow up the comet. His racist rants while being broadcasted to the world are hilarious.

But when a tech guru steps in with his own ideas about the comet, and why letting it hit might not be such a bad thing, the mission is called off. This sets the final act of the movie in motion, as everyone’s fate becomes inevitable. This movie is clearly a black comedy and a farce, but it’s also a little scary. Especially the parts about how ridiculous our current society has become. The performances are lots of fun here, and the humor is right on the money. For director Adam McKay, who has branched out quite a bit since his days of making Will Ferrell comedies, this just might be his best film yet. And the biggest accomplishment of all might be how they take this story about finding a comet hedging toward earth, and make it last for an entire film, by adding new twists, wrinkles, and fears in along the way.