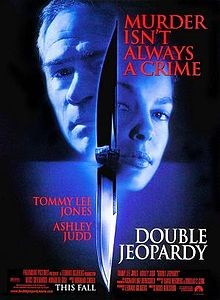 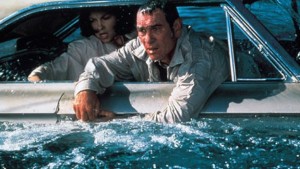 Despite it’s interesting premise, the movie still manages to feel like something we’ve seen before. especially as it goes further along.

Brief review: this movie definitely has a lot in common with the fugitive, including tommy lee jones in a very similar role, and yet it still manages to feel like it’s own thing. maybe that’s because the twist happens so early on and the rest of the movie ends up not being about solving a mystery, but instead, about getting revenge. the film works really well for a while. ashley judd handles the main character well, and the story moves along at a nice, quick pace. but then it suddenly starts to fall apart in the final third or so, once the film heads to new orleans. at that point the movie no longer strives to be original or creative at all and just falls into the usual patterns that we’ve seen a thousand times before.

Double Jeopardy looks like a b movie. in fact, it looks like a cheap knock-off of the fugitive with everything from a main character insisting, “I didn’t kill my wife,” (in this case husband), to tommy lee jones as the officer in pursuit of our protagonist. luckily, the movie does try for something a little different, despite it’s similar components. the storyline here isn’t about an escaped prisoner, but about a prisoner who has been released. How after being convicted of murder, someone goes free having only served six years, is beyond me. still, the movie is about a woman who has the wool pulled over her eyes and is now out for revenge.

at the start of the film we meet libby parsons and her husband nick. the two of them seem happily in love as they throw a party together for investors in nick’s company. there’s also a woman there named angie who helps take care of their son, matty, and somewhere between a nanny and a good friend. it’s at this party that we learn nick’s company is going under, and that he is also about to be sued by a number of people. think bernie madoff. this guy is screwed. still, he keeps a certain charm and confidence, never losing his cool, despite knowing what appears to be coming.

the next day, nick and libby decide to take a sailboat out. he doesn’t like the water or sailing, but it’s something she has always wanted to do, and so it’s a special occasion. the two of them spend the night out at sea and when libby wakes up in the middle of the night, she is covered with blood. she runs upstairs, onto the deck and finds blood everywhere, including all over the railing. it seems like nick got cut and fell overboard. she also finds a bloody knife on the floor. that’s when the coast guard arrives and brings her in.

it isn’t long after this that libby is arrested and charged with nick’s murder. she goes to trial, and the prosecution plays a recording of nick calling the coast guard and claiming that he was stabbed. libby’s only explanation for this is that someone must have come aboard their ship. aside from not having a very good excuse or reason there, the prosecution has more. they have motive. libby and her husband took out life insurance policies just four months ago and now she is set to collect two million dollars from the insurance company. on top of all that, the financial problems that nick was having that were about to make him go under now, suddenly, all disappear. these are too many things for the jurors to overlook, and so they convict libby of murder.

all of this happens within the first twenty minutes of the film. that’s pretty remarkable. there are many movies that would have taken the first hour to tell all of this. i like the way that Double Jeopardy chooses not to waste any time and instead moves at a breakneck pace. once in jail, libby makes two friends and tries to get angie to bring her son for visits as often as possible. then one day, angie stops bringing him. libby tries calling, but the phone number has been disconnected. she does a little detective work and tracks down the new phone number. it’s for a place out in california, and when libby calls, she hears her son in the background shout, “dadd.”

now this is the first bit that is a little unrealistic. from hearing that one word, libby is able to figure out that her husband is still alive. i realize that she’s combining that word with the fact that angie moved to california without ever telling her, but even still, that word, “daddy.” could have been so many other things. it could have been somebody who looked like nick walking in, or appearing on tv. it could have been that libby misheard the word. but suddenly she knows everything and understands that she has been double-crossed by both her husband and angie.

this is now the middle portion of the film, and other than that overhearing and jumping to conclusions part, things are handled pretty well. libby is released instead of escaping, which is a good move (even though i still don’t understand how she can go free after only six years), and instead of immediately going to find nick and her son, libby checks in to a board house, where an older man watches over all of these women on probation. that man is travis, tommy lee jones. he’s more than just a guy who looks out for these women and gives them a place to stay. he’s a former policemen who chases them down if they run off.

libby tries to track down an address for angie out in california. when the school where angie used to work, won’t give it to her, libby breaks in at night and searches through the files. the police get called and we get a great chase scene on the beach. i love that this scene doesn’t take the easy way out, which is to have libby be long gone by the time the police get in. instead, she is still in there, and so the chase scene ensues.

little by little, libby starts to make her way to new orleans, where nick (now going by the name jonathan), is currently residing. the movie does become more like the fugitive with libby escaping her parole officer and going on the run. it also starts to fall apart once the location shifts to new orleans. every cliche that the movie seemed to be avoiding earlier on, it now suddenly falls into. so, when we got that scene of the cops busting in and expected to see libby long gone, for example, and were so pleased that she was actually still there, well, now we get the version where she is long gone. it takes place in an art gallery with libby searching the owner’s computer. the worst part is that even when she hears travis’ voice in the next room, she still continues searching. equally dumb is the fact that after she overruns his car and totals it, he is still level-headed and composed, asking the art dealer calmly what she was doing there.

the new orleans scenes are where the movie really falls apart. there was great build up, but when our two main characters (libby and nick), finally do come face to face again, the result isn’t all that great. now the movie falls into major cliche territory. the first half of this film is far better than the second half. one might point to the moment where libby finds out that angie is dead as where the movie starts to take a turn for the worse. angie was probably the most interesting character, uncertain about what she and nick were doing or how to handle it with libby. aside from all the other cliches this movie hits, just having tommy lee jones in this role is an example of major typecasting. he always plays this character. from the fugitive to the hunted to no country for old men. the movie has a cool storyline going on, and a very nice setup, but once the pieces finally do come together, it doesn’t know how to handle them.