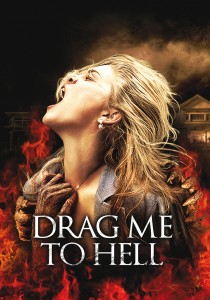 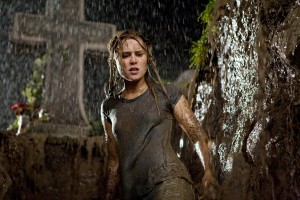 A very campy, very fun horror movie that knows how to make the audience laugh with it’s quick humored jokes and style.

Drag Me To Hell represents director Sam Raimi back in top form, working in the genre that he does best… campy,funny, old fashioned horror. it’s been a while since he’s done anything like this, with the spider man trilogy dominating his career for the past decade, but Drag Me To Hell proves that he hasn’t lost a step in his game. It’s the kind of movie where an invisible spirit comes out of the shadows and throws our hero around rooms or knocks her around and terrorizes and torments her. And then our hero, Christine, says intentionally corny one-liner dialogue to shows that she’s tough and not to be messed with. stuff Like “Groovy,” or “I’m gonna get some,” or “I’ll shove it down her god-dammed throat,” or “I’ll give you a tip you’ll never forget.” Raimi practically invented this type of movie with his evil dead trilogy. Specifically evil dead 2, which was the best of the bunch. It was like terminator 2 in the sense that it was a sequel, but took the genre so far out in a new direction, that it basically changed the playing field for movies to come and what they could get away with.

Drag Me To Hell is almost like a tribute to evil dead 2, complete with flying eyeballs and possessed, talking goats and all. It’s a movie with a very basic story about a girl who turns down an old woman for a loan and then suffers the wrath of the woman in the form of a curse. This woman, ms. ganush, is actually an old gypsy and like the movie thinner or any other curse horror movie, it all starts because she feels that our main character has wronged her.

And Sam Raimi has a lot of fun with this basic premise. He has the old woman attack our heroine christine (allison lohmaN), a couple of times. Usually it turns out to be a dream, but then there are the couple of times, like the parking lot scene, where we can only wish she was dreaming. And the attacks happen in the most vile ways. For example, ms. ganush bites christine on the chin and practically sucks on her chin for what feels like a long time. It’s totally gross and that’s the way raimi likes it. And later on, when the dead body of the old woman falls out of a casket and lands on christine, the woman’s opened mouth lands on christine in almost the exact same way. and then green vommit starts pouring out. If it was meant to be silly fun, it would be totally nasty. But we laugh more than we cringe. In another attack scene between christine and the woman, christine ends up shoving her whole arm into the woman’s mouth, before dropping some weights on her head that make the woman’s eyeball pop out and fly across the room.

Raimi clearly has a fascination with facial body parts. Mostly eyes and mouths. He has a fly travel into christine’s mouth while she’s asleep and an eyeball appear inside her cake while she’s at dinner with her boyfriend’s family. This boyfriend is played by justin long, a kid who got his first big break in the horror movie jeepers creepers. So, he’s no stranger to the genre, but here with sam raimi, he’s working with the best. And this movie delivers.

Well, nothing quite that extreme happens in Drag Me To Hell (that’s more of a b movie idea, like that japanese movie about a girl with a machine gun arm), but instead, raimi messes with his character in every way possible without transforming her body. When she gets a nosebleed, for example, it sprays out across the room and drenches her boss, who is overly concerned about whether any of it got in his mouth.

One thing pretty cool about this movie is that raimi explores all different possible solutions to christine’s problem. She goes to see a psyhcic and gets ideas from him, and then tries each one of them out. First, it’s an animal sacrifice. Then a saeance where they try to transfer the spirit into a goat and kill it. And finally it’s the idea that you can give the cursed object away, but the person has to knowingly accept it.

Aside from the curse and ramifications that come as a result of it, there are also plot points going on with christine at work. There’s a manager position available at the bank where she works and she’s competing with a scummy asian guy for the position. It’s all about who can impress the boss more, but then foul play enters into the equation as chrisine finds herself being sabotaged. Somehow, this is the least of her problems.

There are two climaxes or giant scenes of excitement at the end of this movie, and I’m not even talking about the train station ending. I’m talking about the saeance in which the spirit transfers between two different people as well as a goat. And also the graveyard scene in the rain which is really fun and intense.

Sam raimi is a master filmmaker and he does this genre better than anyone else. He produced the grudge and had a lot of stake in that movie getting made. ANd in spider man 2, there were hints that he missed the horror movie genre, such as the scene where doctor octopus’ arms came to life on a surgerey table and attacked everyone in the room. But none of it compared to the real thing, directing and having total control over a real horror movie. In Drag Me To Hell, sam raimi is gets his chance, and he doesn’t waste a moment. He gets away with whatever he wants and enjoys himself the whole way. This is the guy who made darkman when he was trying to prove himself, and then made the accademy recognize his skill as an artist when he made a simple plan. And with the spider man movies, he was brought into the mainstream. But instead of forgetting his routes and selling out for something bigger, raimi returned to the kind of work he does best and had the most fun with. That’s Drag Me To Hell. The movie raimi was born to make. the movie that shows at his height of career, raimi is still the same guy he always was. Drag Me To Hell is representative of a master filmmaker working at his best capacity.