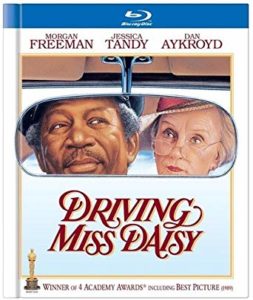 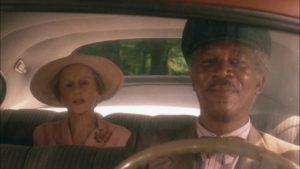 A light-hearted nice movie that just doesn’t have enough conflict or resolution to really make a complete story.

This is a unique movie in that it tells the story of a topic and characters that we don’t often hear about. That being said, there is another movie of more recent times that has a number of similarities, and that movie would be Green Book, also about race relations and an employer – employee, driver situation. But Driving Miss Daisy is about older people, whereas that other film is more about macho tough guys and comedy. Both movies are about learning to be accepting, but unlike Green Book, Driving Miss Daisy doesn’t quite have enough conflict. Sure, there is the strain on the relationship between Miss Daisy and her drive, Hoke (Morgan Freeman,) when she doesn’t let him do things around the house, but there are only two real scenes of conflict. One involves a situation where Miss Daisy believes Hoke is stealing from her, and the other has to do with a night out to see a Martin Luther King Jr. speech. It’s that scene, in particular, that doesn’t go far enough, pointing out the racism to the audience, but not having the characters actually do anything about it. This is an example of a conflict with no solution. The movie is enjoyable and very light-hearted, but it could have used a little more edge.

Driving Miss Daisy won the best picture Oscar for 1989. It won instead of movies like Field of Dreams and Dead Poets Society. Now this is a fine movie, and it has some good performances in it, but an exceptional picture it is not. It’s the movie about an unlikely friendship that is born out of an employed – employer relationship. It is also a relationship that spans race during the time of the Civil Rights Movement. And all of that context is great. But the story itself does not consist of a whole lot more than the interactions these two have with each other. And other than that, there really isn’t enough conflict in the movie, and certainly not enough resolution. Compare that to Green Book, another movie made about the relationship between a driver and the passenger, which also spans race lines and deals with race relations. Green Book, which finds lots of clever situations, uses great humor, and is loaded with conflict, is the far better film. Still, Driving Miss Daisy is not bad, and it does hold up after all these years, just not quite as well as one might have hoped.

The movie starts with Miss Daisy, (Jessica Tandy, who won an Oscar for her performance that was well-deserved,) getting into her car, starting the engine, and having a minor accident in her driveway. She blames the car, but everyone else knows that the accident was caused by her putting the car into the wrong gear. Her son, Boolie Werthan, (Dan Akroyd,) comes to visit and tries to talk some sense into her. He doesn’t want her driving anymore, but she insists. He tells her the reality of the situation is that regardless of how she feels, the insurance companies just aren’t going to insure her anymore. So she really doesn’t have much of a choice.

But Miss Daisy is independent and stubborn, and even when she can’t drive, she insists on doing everything herself. That means finding her own way to get to the Piggly Wiggly Grocery Store, and her own way means taking the trolley. Boolie decides to hire someone to be the driver for his mother. One day at the factory where he works, the elevator gets stuck, and only one man at the scene knows how to fix it. This is Hoke Colburn, (Morgan Freeman,) and he is more than willing to help. When Boolie gets down, out of the elevator, he talks with Hoke a little bit, and realizes this just might be the right man for the job. He offers Hoke the job of being the driver for his mother, and tells Hoke that he will be working directly for Boolie and not for his mother. “She can’t fire you,” he tells Hoke. “Only I can.”

And so Hoke starts working for Miss Daisy. Only she does not appreciate having him around and takes it as a personal insult, reminding her that she is no longer allowed to drive. She doesn’t consider herself racist, since she has another black woman who works for her. This is Idella, the maid, who keeps the house nice and neat. Miss Daisy’s true feelings about race will come out a little later on though, during a Martin Luther King Jr. speech situation. For now, she just doesn’t like having Hoke around her house, and lets him know it every chance she gets. Hoke tries to do things like dust the light bulbs and plant flowers and vegetables in her garden, and Miss Daisy stops him every time she notices. She wants him to just sit there and be bored, and hopes that he will eventually quit. No such luck.

After a while of seeing that she can’t ware this guy down, Miss Daisy decides one day that she needs to go to the grocery store. Her plan is to walk to the trolley and then take the trolley there herself. Only Hoke is not having it. He was hired to be the driver, and this is his chance to drive. He gets in the car and starts following her throughout the neighborhood. And by following, what he really does is drive slowly right alongside of her. Miss Daisy notices more and more that everyone who is outside on this nice day stops to look at her walking and the mysterious car beside her. Finally she can’t take it anymore and she gets in. That ends the stubborn holding out contest.

Miss Daisy isn’t exactly nice to Hope. She gives him orders about how he is driving and doesn’t want him to go his way, even though it is the faster route. She even watches the speed limit he’s going and demands that he drive way under that limit. But Hoke goes along with it all. He’s just happy to be driving, and as soon as Miss Daisy goes inside the Piggly Wiggly, Hoke runs to a payphone and dials up Boolie to let him know that he’s finally being put to work. Only things don’t get much better around the house. Miss Daisy still ride Hoke as hard as she can. At one point we even get our best conflict scene in the movie, involving some food that Hoke may or may not have taken.

This scene has Miss Daisy call her son up urgently and tell Boolie that Hoke is stealing from her. When Boolie arrives at her house, he learns that the accusation is about a single can of food from a pantry where Miss Daisy has eight others. Even still, Miss Daisy won’t hear of it, with Hoke taking things without asking. In truth, she’s looking for a reason to get rid of him, and she thinks she has found it. But then Hoke shows up, puts down his coat, and then returns to the room with a can in his hand. He stopped by the store on his way in this morning and picked up another can to replace the one he had yesterday. That’s how honest he is.

It’s scenes like that which are pretty fantastic. The problem is that the movie doesn’t have enough of them. There are really very few scenes of conflict, and the can stealing accusation is the biggest one. Another scene that comes close has Miss Daisy going to hear Martin Luther King Jr. speak. She claims to believe in what Dr. King stands for and want to do her part to help out. She has two tickets for the ballroom to hear the speech, one for her and one for Boolie. Only Boolie drops out, concerned about what others might think if they saw him there. And that leaves one free ticket available. Miss Daisy considers asking Hoke to join her, but her attempt at doing this is more awkward and uncomfortable then a real asking. She basically accuses Hoke of putting it into Boolie’s head that he would be interested in attending with her. And that leads us to a pretty interesting revelation, that Miss Daisy might speak of change and how things are getting better for black folks, but she’s not willing to do anything about it herself.

Towards the end of the movie, old age sets in. There’s a situation where Hoke arrives one morning to find that Miss Daisy has lost her marbles. She moves around the house frantically in search of her papers that she claims to have graded for school. She talks about how the children will be so disappointed if she doesn’t give them their papers back. Miss Daisy is thinking back to when she used to be a school teacher, and thinks that she is now back in that time. From here, we leave the characters for an unspecified amount of time, and return to them when Miss Daisy is in an old age home, and Hoke is no longer driving. But he still makes the time to visit her.

Driving Miss Daisy is definitely the story of friendship, only that friendship doesn’t really show itself at all until the final scenes. Sure, Green Book did the same thing, only in that movie at least the gestures were real acts of friendship and belonging. Here, the most we get is Miss Daisy admitting to Hoke, when they are alone, that he is her best friend. There were opportunities for more conflict that just weren’t taken, and opportunities for resolution, (like the Martin Luther King speech situation,) that just weren’t followed through on enough. What we get is a nice movie, with great performances, that could have gone a lot further with its storytelling.