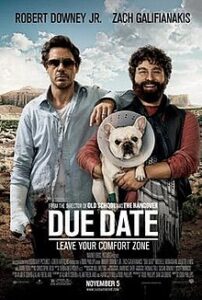 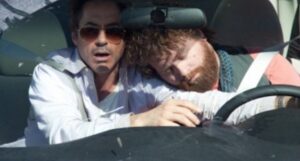 An attempt at remaking Planes, Trains, and Automobiles that goes pretty wrong, this one starts out entertaining, but then falls apart pretty quickly after that.

Due Date is a movie that pretty blatantly rips off Planes, Trains, and Automobiles. I say rips off simply because it doesn’t use that title or a variation on that title or anything else that would clearly announce it is a remake. And I suppose it’s not exactly a remake, but in the first half, especially, it sure feels that way. And unlike the original Steve Martin – John Candy movie, this one is not very good. It’s more annoying and stupid than anything else. Now that’s really sad considering its director, Todd Phillips. This guy started out as a master of comedy, before taking on movies with bigger budgets and not even close to as many laughs.

Phillips began his comedy directing career with Road Trip, a college comedy geared to the American Pie crowd. It was made at that time, in the year 2000, when teenage comedies had taken on a life of their own. Scream put teenage movies back on the map  (and also horror movies,) and then American Pie put teen comedies back in people’s lives. And Road Trip was pretty great. Phillips followed it up with something even better, Old School. That movie was the ultimate Frat Pack film, (the group of actors who appeared in different movies together.. Vince Vaugh, Luke Wilson, Owen Wilson, Will Ferrell, Ben Stiller, and Jack Black.) Old School was a masterpiece, and unlike Road Trip, it dealt with adults. But then Phillips went off the rails. School for Scoundrels was lousy. So is Due Date. He found his footing again with the Hangover, but then made two lousy sequels to a movie that never needed to be the start of a trilogy. Phillips ended up leaving comedy for dramas and gave us War Dogs, which was good, and then The Joker, which was sensational.

It’s unfortunate, then, that Due Date is one of, if not actually Phillips’ worst movies. It’s either this or School For Scoundrels, and it’s probably this. Both this and Scoundrels have a star studded cast, which tells you that the casting can only get you so far. It’s about the writing and the timing, with comedy, more than anything else. In Due Date, we get appearances by Danny McBride, Jamie Fox, RZA, and Juliette Lewis. And none of them are especially funny. Nobody steals the show here, because there is no show to steal. This is just a two characters annoying the hell out of each other movie for nearly two hours. It’s not smart comedy. In fact, it reminds me of that Jason Bateman – Melissa McCarthy movie, Identity Thief, from a few years back. Both movies were pretty awful.

Now Due Date actually starts pretty funny. And by starts, I mean the first handful of scenes. Robert Downey Jr.’s character, Peter Highman, is an average guy on his way home from the east coast to get back to his pregnant wife,Sarah (Michelle Monaghan) in California. Getting back to the casting for just a moment, Downey Jr. was coming off of Tropic Thunder, (made two years prior,) in terms of comedy, and that was by far one of his best acting gigs yet. He was even nominated for an Oscar for that one, which is something that does not happen with comedy very often. But he took major chances and blew the roof off there. So what do they do with this movie? Make him the straight man. Take away everything that made him great in that film. It should also be noted that the last time Downey Jr and Michelle Monaghan worked together was in Kiss, Kiss, Bang, Bang, a pretty excellent Shane Black noir mystery. So everything seems to be aligned correctly for Due Date to work, in terms of casting. If only the story and jokes were better.

Peter gets a town car to the airport and opens the car door when they get there. Immediately another car comes by and trips the town cars door right off. And Peter, who is sitting next to the door when it comes breaking off, isn’t phased by this at all. He just keeps going on his way, not even really having a reaction to it, while the owner of the town car is left behind, freaking out. The driver of the car who hit the town car was giving a ride to the airport to one of his friends, who also gets out of the car, grabs his stuff from the trunk, and continues on his way, not even bothering to see if his friend is alright. This guy is Ethan Tremblay, (Zach Galifanakus, coming off the Hangover – boy, it really does feel like every actor here was coming off of something much better, like something huge and game changing, before taking on this stink bomb.)

Seeing the way that neither Peter nor Ethan reacts to the accident is a little strange, but we do get a funny movie on the curb right after that. Ethan knocks over Peter’s belongings and Peter asks Ethan to pick them up. Ethan replies that he can’t, because you’re not supposed to touch a stranger’s belongings while at the airport. The two go on their way and Peter runs into a problem at the security check. He and Ethan mixed up their bags. And Ethan’s bag has marijuana and paraphernalia in it. That means Peter has a lot of explaining to do, and gets into it with the RZA, playing an agent, on the TSA security check line.

By the time Highman gets on the plane, we are definitely getting Planes, Trains, and Automobiles vibes. The car accident at the airport was similar in tone to the chase for a cab in that classic movie, which led to Martin going flying over Candy’s giant suitcase, and not getting the cab as a result. And that situation, that this man (Candy,) is the reason why Martin had to deal with so many problems, before they meet again, is very similar to what just happened here with the marijuana pipe. And of course, our guys meet again on the plane. In fact the plane sequence is by far the funniest material in the movie. First, there’s a fantastic moment where Ethan’s bare belly rubs against Highman’s face (this blows the hairy guy – Ben Stiller, sweaty belly on face basketball moment from Along Came Polly, right out of the water, although due to its slow motion, I suppose the Ben Stiller moment is actually more memorable.) And then there’s Ethan saying the words “bomb,” and “terrorist,” on the plane to Peter, which gets them both kicked off the flight (another call back to a Ben Stiller movie – Meet the Parents with that ending and those key words that one should never say on a plane.)

Peter leaves his wallet on the plane. Which means he has no ID an no credit cards. But he still has to find a way to get to California. So its rental car time. Only without ID or money, he can’t rent a car. This again, is very Planes, Trains, and Automobiles, where Martin tried renting a car, got to the spot in the parking lot, and his car wasn’t there. That’s when Ethan pulls up in a car and offers Peter a ride. And of course, Peter accepts. This leads to all sorts of annoying interactions between them, with Ethan doing stupid things, (he goes to a Waffle House with Peter, for example, even though he is allergic to waffles,) and Peter getting upset by them. At one point they stop at a pot dealers house to buy some, and Peter is left with the two kids, watching TV with them and having to interact with them. This moment is actually pretty funny, and it is a testament with how much natural talent Downey Jr has, when given the freedom to move around in and explore.

But most of this movie doesn’t give him those kinds of opportunities. Instead, this film becomes a physical comedy, and by physical I pretty much mean action. Which would be fine, if the jokes were actually funny, (after all, Tropic Thunder was an action comedy too.) But here, it’s pretty much routine. And when it’s not routine, it’s just plain stupid. So we get a scene where Ethan falls asleep at the wheel and it leads to the car driving off the side of an overpass. Peter breaks his arm in the accident. Then, later on, we get a car chase over the Mexican border, with Ethan driving through all sorts of things while Peter is stuck in a trailer, dragging behind, and being thrown around from one wall to the next. None of this is funny. Physicality needs believability,  (think of Phillips’ The Hangover with the guys driving on the expressway in a convertible and a tuxedo company pulling up in a van beside them and throwing their suits to them, that was believability.) In Due Date. the problem is that this chase is just so unrealistic that we are completely taken out of it. We don’t care, and we most certainly aren’t laughing.

The movie tries all different kinds of things to get us laughing and very little of them work. It tries a storyline with Jamie Fox as Peter’s long time friend, who may or may not have had an affair with Peter’s wife. In fact, Peter even gets suspicious that the baby his wife is having is really Fox’s. This kind of material is incredibly cliched. We expect better from Phillips. And that’s really the overall story of the movie, and why it doesn’t work. It’s material that we’ve seen before, and we’ve seen it done better. These two guys here might be great actors, but together they have no chemistry. And the jokes mostly fall flat. There’s a moment where they are trying to fall asleep in the car, lying side by side, and Ethan starts masturbating. Peter catches him. And instead of stopping, Ethan keeps going, telling Peter to just ignore it. And Peter is okay with this. How about telling Ethan to get out of the car and go in the bushes or find a bathroom or something? But this movie wants to be as extreme and ridiculous as possible, hoping that there is humor in that. There isn’t.