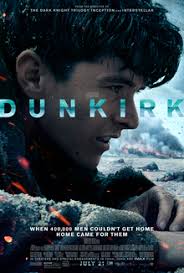 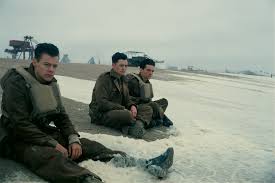 A war movie that’s not really about the action as much as its about the survival, this one is artistic, but also a bit of challenge to get through and understand.

Here’s a movie that takes patience. It takes effort. Like most Christopher Nolan films, (okay, all of them,) it takes figuring things out and taking the time to understand it. But the effort is rewarded when one actually figures out what’s going on here. This is a war movie that isn’t so much about the war, as much as it is about the escape. It’s about survival. Let’s put it this way… we never actually see the enemy. Now, we do get tons of threats in the ways of things like bombs being dropped or torpedos being fired. But the movie isn’t about combat. It’s about these young guys who are trying to make it out of France, and get back home to England, during an evacuation. And the way Nolan tells it,  by giving us three stories at the same time, is pretty smart. The way he plays with time here is also pretty clever. The movie is definitely slow at times, but overall it’s a pretty rewarding experience.

Dunkirk is a tricky movie. That’s not surprising, considering that it’s a Christopher Nolan film. This guy doesn’t make movies that are simple or easy to understand. He is Mr. Elaborate, and that’s what makes him so great. For the most part, you generally get the idea of what he’s trying to do in every one of his movies, even if you don’t quite understand everything. And it’s very hard to understand everything on a first viewing, no matter which one of his movies we are talking about. After all, this director plays with time as a staple of his films. He also often plays with space and reality. This is the guy who made a movie backwards with Memento, and another film that was about a dream within a dream within a dream, with Inception. And of course, in that movie, all dreams were moving at different speeds, taking different amounts of time. In Interstellar, time again moved at different speeds, both on space and also back on earth. So it shouldn’t come as much of a surprise that even when making a semi-historical war movie, with Dunkirk,  Nolan still finds a way to play with time and speed.

The movie is about three different stories, all to some extent happening at the same time. What I mean by “to some extent,” is that the three stories are intercut throughout the movie, so that we see parts of each of them happening at the same time. But in actuality, they are not meant to all take place at once, and instead are meant to only overlap each other. This is told to us with screen titles the moment we begin each of the stories. These three are The Mole: One Week, The Sea: One Day, and The Air: One Hour. So for one small part of the Mole story, we are also seeing an overlap with both the sea and the air story. This also means that we get to see certain events happen three times, (like a plane going down,) and see it from three different points of view, depending on which story we are in.

This all sounds pretty smart and clever, and it most certainly is. But it’s also not all that easy to follow. And Nolan is totally okay with that. This is his war epic, and he has made it at a length that is under two hours. Now, that is quite an accomplishment considering not only the general length of epic war movies (which is pretty enormous,) but also the usual length of a Christopher Nolan movie, which is also pretty long. But Dunkirk is a movie that cuts off the fat. It wants to really capture the momentum and the panic that these soldiers and civilians must have been feeling, and so it leaves no room for excess material.

Despite there being three stories, and a large ensemble cast, there is also one protagonist. He’s the guy who the movie opens with, Tommy, a young man who is at all times just trying to survive. At the start of the film, we are with Tommy and a number of other soldiers as they walk through the deserted and decimated streets of a French town. The scene is silent, and we watch as leaflets are dropped from the sky, sent down by German planes, and contain a threatening message. The leaflets show a map and show that the Germans have them surrounded. And then suddenly the gunfire starts. Everyone who is there with Tommy is shot down. He runs away and escapes. He gets behind a wooden door and tries firing through it, back at the enemy. Then he keeps running, eventually to where the French are stationed. And then he makes it to the beach. This opening, where we really take on the point of view of Tommy and what he is going through, is the best sequence in the movie.

But the excellence continues, as Tommy tries to get on a line at the beach and is told he can’t be on it. Right after that,  series of bombs are dropped on the men standing in the line, and the bombs get closer and closer to Tommy killing every man on screen up until they reach him. That bombing scene plays out like a domino effect, and is pretty incredible. But then Tommy comes across another man, Gibson, who is burying a body. And the two of them have the idea to grab an injured man who is still breathing, put him on a stretcher, and use him to try and get on an injured soldier ship, posing as medics. So now they go running around the beach with the stretcher as the music rises and the tension builds. And even when they reach the ship, there are a number of challenges with getting on including a guard who turns them away, (and who they sneak past,) and a hole in the floor that they have to use a single plank to walk over.

And this is all just to get on the ship. A ship that they are quickly kicked off of. At that point, our guys are hiding on the rafters beside the ship when the ship is shot down and destroyed. But these two guys, who are all about using any opportunity they find to help them, now pretend that they were on the ship and use that to get on the next one. They even dunk their heads in the water to make it look like they went under and were a part of the disaster. All of this just leads to them getting on another ship, which also is sunk. Nothing seems to be working out for these two guys, but that doesn’t stop them from continuing to try.

Meanwhile, in England, we start following the Sea story of a civilian named Dawson, (Mark Rylance, from Bridge of Spies,) who is an older man with a small boat. Dawson is out there with his son and a young man named George who boards the boat and offers to help. Dawson has learned that the British navy is commandeering all small boats to use them to bring to France and try to bring back some of their soldiers. All of these soldiers are just waiting there, on the beach, hoping to get picked up. England needs them back to help defend their own country from the Germans, who are certainly coming there next. So Dawson decides to take his boat out there himself, to try and rescue as many of those soldiers as he can.

And then there’s the air story, featuring Tom Hardy as a fighter pilot. There’s not a whole lot to this story other than watching the three fighter planes engage in fire with the enemy from time to time, and watching two of the three planes go down. Still, Hardy makes the most of it. He’s a pretty fantastic actor who always seems to be able to do a lot with a little. In The Dark Knight Rises, he was hidden behind a mask for the entire movie and yet he still managed to give the character Bane tons of menacing personality, starting with a pretty insane voice. In Locke, his best movie to date, Hardy was stuck behind the wheel of a car for the entire movie. He was also the only actor to appear on screen in the movie. And he knocked that one man show, right out of the park. Here, he is again hidden behind a mask for nearly his entire performance, and he still does a lot with it.

The movie features a number of these big name stars in some of the more minor roles. There’s Rylance and Hardy, but there’s also Kenneth Branagh as a Navy Captain who stays on the docks in France and helps with the evacuation. And even Michael Caine contributes his voice work in one of the airplane scenes. But the heart of this movie belongs to the young guys in the Mole story. That includes Harry Styles, from the music group One Direction, who plays Alex, a soldier who is rescued by our two guys from a sinking ship, only toe betray them later on, when he sees an opportunity to get ahead himself.

While there is a lot going on in this movie, it is often challenging to follow. Nothing is super clear, and instead as an audience member, you have to work at it to really put the pieces together. But it’s worth it. This is an artistic movie, and it’s hardly the kind of action movie that we come to expect from a war film. This one isn’t about the action. It’s about the survival. It’s about understanding how hard this must have been. This one is very different than say a Saving Private Ryan, (which has become the ultimate World War II movie over the past two decades or so.) Dunkirk is made for a very different purpose. It’s a movie that features all British or French actors, (we never even see the enemy.) The movie takes place before America even entered the war. And this is not a film about victory. These characters are spending the movie trying to retreat and get back home. That’s a tricky concept for a movie, and yet in Nolan’s hands, he finds a way to make it work. Sure, it gets tough to follow, and even a little slow from time to time, but  that’s just the movie challenging you to work at it and stay with it. Because to get this movie and see everything that Nolan is doing here is quite rewarding and well-worth the sacrifice of putting the effort in, and taking the time to figure it out;