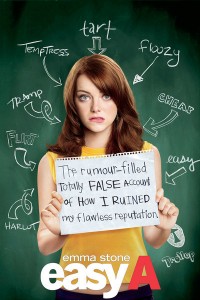 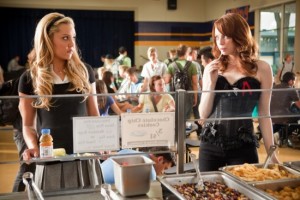 What starts as a typical teenage comedy ends up becoming pretty clever and creative as it moves along?

Most movies about teenagers and dating these days are poor retreads of American pie. There are all of those cheerleader movies or movies about guys infatuated with girls or loser guys, or whatever else. And they’re all pretty stupid, often going for the gross out humor instead of for an interesting plot, like say, she’s out of my league did when it had one friend shaving another friend’s nut sack. These movies want to be outrageous and sexual at the same time, but what they don’t understand is storytelling. They are made for guys and for young, teenage guys who don’t want to think. Easy a is totally different. For one thing, it is not about a guy and not necessarily a movie for guys, but more of a movie for anyone.

The movie is also somewhat smart, which is a welcome surprise to the genre. It starts off as a pretty typical teenage movie with the different clicks of kids and friends who hang out with each other. Plenty of them are clichés, such as the ultra-religious kids who hang out together sitting in circles, singing songs about god. And even the initial premise about a lie that gets mistaken for truth, when one girl tells her friend that she lost her virginity, is nothing out of the ordinary.

The girl is olive, (Emma stone), and when she tells her best friend that she spent the weekend with a guy and slept with him, it is overheard by the head of the religious group, Marianne (Amanda bines). The next thing you know, everyone in the school knows about olive and she is like a local celebrity. I don’t really get that. A kid in high school losing her virginity is really not such a big deal. But still, just to go along with it, what does get interesting is when it seems to happen again and again.

Different guys approach olive and ask her to pretend that she slept with them. It’s an act for the benefit of the guys to convince everyone that they are cool. After the first rumor about how olive lost it to a guy over the weekend, the next big situation is when a gay guy who is constantly getting beat up, asks her for help. And they go in a bedroom during a party and make a lot of noise, knowing full well that everyone is standing outside the door listening. It’s all pretty ridiculous, but again, going along with it, at least it’s leading somewhere.

It’s in the second half of the movie that this goes from just another teenage movie to something that is actually pretty smart. First, there’s the situation with Lisa kudos and her husband, Thomas Hayden church. I’m a big fan of churches, ever since he did sideways. He doesn’t always pick good projects, but still even when the movie is bad, he’s a lot of fun to watch.

In this movie, church plays olive’s English teacher and Kudrow plays the school guidance counselor who is also his wife. Church is really funny as the English teacher (which is a lot more than I can say about Stanley Tucci and Patricia Clarkson who plays olive’s parents). Church teaches the Hawthorne book, the scarlet letter, makes jokes about the Demi Moore version, and even does a little rapping. He’s also got an ear into the lives of his students and gives good advice to them. There’s a great moment where olive is acting all cool and promiscuous as she walks the halls and then she stops when she runs into church. She’s not going to pull this kind of act with him. And he knows it too, stopping her in her tracks with, “what are you doing?”

Well, the church and Kudrow situation involves one of them having an affair and the person they are sleeping with somehow finding a way to blame olive. And rather than break up the marriage, olive goes along with the lie. Now she’s a villain, pretending to be the one making a guy cheat on his girlfriend, instead of getting the happy teacher couple mixed up in it.

And that’s just the start of where the movie begins to get good. After that, there’s an amazing scene where olive goes out on a date with a guy and is really excited about it. Finally, someone has asked her on a real date, not more of this pretend date in exchange for money stuff. Only things don’t work out quite the way olive planned. Let’s just say her whole make believe game ends up catching up with her in a way that one might think she should have seen coming. Eventually somebody was going to take it to this level, and on this date, it goes there. Basically the story of the boy who cried wolf happens this time, with the same kind of consequences.

Now there are some things that don’t work in this movie. Stanley Tucci and Patricia Clarkson play cool parents who are always joking around with their daughter, and I get that they want to play something different here than the usual parents (otherwise, what’s the point of having such great name actors in these roles?), but it doesn’t really work. These parents are more annoying than they are cool. And so are most of the kids in the school. Especially olive’s best friend.

Still the storyline is pretty strong, especially for a movie in this genre. And I love where it ends up, reaching places that were sort of inevitable, and yet at the same time, both olive and we never really saw them coming. We knew her secret would have to come out eventually, yes, but we never thought things would be taken so far. I’ve come to realize recently that when it comes to comedic, sexual, teenage movies, the ones that feature girls as the main characters are often much funnier than the one’s that feature guys. Judd Apatow movies the exception (I mean, none of these movies can even hold a candle to Superbad), but still these female-oriented movies are actually pretty smart. There’s mean girls, easy a, and even the new movie bridesmaids (which is Judd Apatow produced, and also not really teenage, but female-driven and supposedly smart and funny as hell). Easy A was an enjoyable movie, mostly because as it went along it got smarter and smarter.