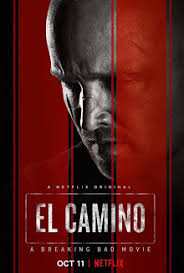 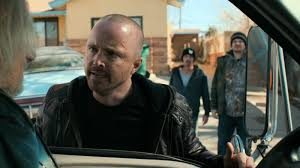 A perfect Breaking Bad movie, this one’s only flaw is exactly what makes it so good… that it is purely a continuation and doesn’t tell any kind of new story at all.

Now this is how you make a movie that is a spinoff from a TV show. There’s a clear difference between movies that attempt this, hoping to tell a new story and spawn sequels (the Sex and the City movie, the Entourage movie,) and something like this that exists at least half in flashback. What El Camino does is it fills in the gaps left behind by Breaking Bad. It tells us what happened during the time of that show, that we never got to see. And then it moves forward just a tiny bit to tell us what happened to Jessie afterwards. This is absolute fanfare. It’s a companion peace more than a sequel. And it absolutely works.

El Camino is the story of Jessie from Breaking Bad. It’s the continuation story of what happened to Jessie after that long-running TV show ended. And while that sounds like it might lead to a new story, as in the next adventure for Jessie, and the next situation in the playbook of his life, it doesn’t. It’s not about a new story, the way pretty much all sequels are. This movie is something different. Its agenda is about fleshing out and explaining more of what already happened during the time of Breaking Bad. The movie is more interested in flashbacks than it is in moving forward. And as it happens, that approach turns out to be a very good thing.

Writer-director Vince Gilligan knows how much the public loved Breaking Bad. He’s been pushing the show in all kinds of new directions since it went off the air. In particular, he’s got a spin-off show, Better Call Saul, which serves as a prequel to Breaking Bad, and tells the stories of the lawyer,  Saul Goodman, (played by Bob Odekirk,) as well as numerous characters from the Bryan Cranston TV series, and what they were doing before Bad got started. Well, that show is in its fourth season and about to go into its fifth. And the fact that it is so successful really says something about how invested the public is in these characters. But what about the character who aren’t on that show? What about Jessie?

Gilligan knows the audience wants more. But unlike Better Call Saul, which really does tell new stories, Gilligan figures that if he’s gonna go in the other direction, (which means telling the future stories, as opposed to Saul’s telling of past ones,) what the audience would love more than anything else is some retread on Breaking Bad territory. Some fleshing out of the unanswered questions and blanks left behind by the end of the series. And so that’s exactly what we get. At least half of this movie is flashbacks of things that happened in, or during the time, of Breaking Bad. The second lead actor in the movie is Jessie Plemmens, who plays Todd, a character that died in Breaking Bad and exists in this movie, only in flashback. And the reason why his character is such a big part of this movie, is because there are so many flashbacks.

When El Camino begins, we start out with a conversation between Mike (Jonathan Banks,) and Jessie. It’s one of those conversations that was never in Breaking Bad, but that the show certainly left a space for. Meaning it happened off screen, right after Todd killed the boy who caught them robbing the train, and Jessie told Mike that he wanted out. This is the conversation about exactly where Jessie wants to go. And Mike gives him the idea to go to Alaska, which becomes the place, in this movie, where Jessie does decide to end up. From that flashback, we move to the current day story where Jessie is driving the car, speeding away from the Nazi compound where the series ended. Anytime a show or movie picks up with a next episode or film that continues right where the last one left off, it’s pretty cool. Especially when it’s in the middle of the exact same action. One clear example that comes to mind is the way the James Bond movie Casino Royale transitioned to Quantum of Solace, with Bond kidnapping Mr. White at the end of Casino Royale, and then engaged in a car chase with White in his trunk, at the start of Quantum of Solace. But in El Camino it’s done even better. We literally end Breaking Bad with Jessie driving away and begin the movie with Jessie still behind the wheel. It’s seemingly perfect.

Jessie drives straight to his friend Skinny Pete’s house. Skinny Pete, one of the drug addict dealers that Jessie was buddies with, is there with his other friend, Badger. The two of them take Jessie in, give him a place to shower, sleep, and get some fresh clothes, and then ask him questions about what happened. Badger asks Jessie, “is it true they kept you in a cage?” And that transitions us into flashbacks where we actually see Jessie, locked in the cage below the ground, with Todd coming by to check on him. It leads us into our first major flashback sequence, where the other Nazis on the compound are away for the weekend and only Todd and Jessie are left behind.

They venture off together to Todd’s apartment, which we get a look at for the very first time. And there we see that Todd has killed the cleaning lady. He tells Jessie exactly why he did it. The lady was the nicest person in the world, but she found his money. She was completely honest about it, and brought the book that Todd was keeping it in right over to him, to show Todd what she found.  But it didn’t matter. Just finding it, and his knowing that she knew he kept it there, was enough. It was enough for him to think maybe she would tell someone and that someone would want to rob him. And so she had to go. And now Jessie has to help Todd move the body.

From this scene, we move into a present day sequence where Jessie goes to Todd’s place looking for the money. While there, he runs into two men who show up, claiming to be cops. There are some standoff between the men and Jessie, as they all hold guns at each other, and by the end, it is negotiated that Jessie will tell them where the money is, and will take one-third of it, if they let him leave. And so that’s what happens. But we do get one other moment, where the man who is clearly the leader of the two,Neil, says something to Jessie like, “I couldn’t tell if you remembered me.” We’ll find out more about that situation later.

Jessie takes the money he gets from Todd’s apartment and uses it to try and pay for the man who helped Walt find a new life, (played by the great Robert Forster in his final role,) to do the same for him. This character owns a vacuum repair store, and is as secretive about his side business as can be. We saw a good amount of him in the last season of Breaking Bad. He was the last friend Walt had. And now Jessie wants his help as well. Only the amount of money Jessie brings him to cover the job, is not enough. And so that leads to Jessie having to get more. He goes to the guys who he split the money with, each of them taking a third, at Todd’s apartment. And this is where we see how Jessie knows the Neil, through another flashback.

The sequence between Neil and Jessie, at the welding site where Neil works, is pretty exciting. There are other guys there too, who were out drinking with Neil before Jessie showed up. And it’s safe to say that Neil isn’t exactly about to hand over the money to Jessie easily. The result is a standoff shootout just like in the old west. The characters even mention that. It’s the climax of the movie, and it works. It works for a number of reasons. One is certainly the cowboy element. The same way that James Mangold has made lots of movies that could have easily been set in the old west, (Cop Land, Logan,) this sequence in El Camino shows that it has roots in the cowboy days as well. Or at least is able to pay a nice tribute to them.

If you haven’t seen Breaking Bad, then this is not a movie to watch. And that will turn off many people right there. Understandably so. This movie is fan fare all the way. It doesn’t even try to tell a story of its own. What we get of a new story is simply Jessie going to Todd’s apartment, having a standoff with some guys, splitting the money, trying to pay with the money he gets from the split, and then going back to the guys when he realizes it’s not enough. That’s it. But the reason why that’s enough is because it’s only about half of the movie. The other half exists as flashbacks. The flashbacks help explain all of this. They show us why Jessie is going to Todd’s apartment, how he knows the money is there, and who these guys are that he’s splitting the money with. As fan service, you can’t do much better than this. The fact that it gives us more of our favorite characters and in many ways lets us say goodbye to them all over again, is pretty incredible. There may never have been a movie like this before, that exists in large part for the  purpose of going back and showing us things from the time of the show that we never got to see. The other part of why this movie exists is to give us a final sendoff with Jessie, the character whose story the TV show left opened. After this movie, even that story gets a nice closing.