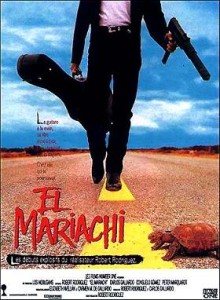 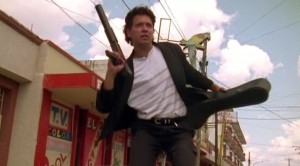 An entertaining action picture with both the action and comedy helping to elevate the status of this indie film.

El Mariachi is Robert Rodriguez’s breakthrough picture as a film director. It’s supposedly a low budget indie film, but it doesn’t really feel like it. apparently with this movie, rodriguez mastered the art of taking a small budget and making it look like a pretty decent one, as opposed to something like pi, where you can really feel how small the money involved was. but aside from the money, it’s a good movie that showcases not only rodriguez’s talent for action, but also his love of Mexico as a background city. we would continue working in this location in the films he made after this movie, much like the way woody allen or scorsese or spike lee all love making movies in new york. for rodriguez, this would be the launching pad for his career, but also for a trilogy that would use this as it’s initial film. the mexico trilogy or the mariachi trilogy. el mariachi, despite it’s small budget, was a strong enough film to single-handedly be the catalyst for all that.

the movie opens with a run down tiny prison in the middle of nowhere. it takes us into the prison from the outside, where we go past a guard who looks uninterested in her job, and then about four cells. the prison itself is really just one long hallway, and at the end of it, a man sits at a desk in a cell, on the telephone making business deals. this is meant to show the corruption of the prison, where even the inmates can continue to run their business. the main character, Azul, is the man on the phone. he receives a call from a drug lord ex partner who double crossed him named moco. the call says that moco will be sending men in the next few days to kill him. suddenly the men show up. that’s when azul and all of his fellow inmates start pulling out guns from inside their cells and let these would-be assassins have it. it’s quite the opening scene, not only for the action, but also for the surprise of it all. we might expect the killers to gun down everyone in the place, but certainly not for the inmates to have guns themselves.

Azul and his men get out and azul calls up moco to let him know that he killed the crimelord’s men and that now he’s coming after him. it’s his declaration of war. and right after that, we move over to another character, a mariachi wandering around, trying to find his way into mexico. the mariachi is walking along the dessert road, looking for a car that can give him a ride. rodrgiuez is giving us a second main character here, and he lets us know that by having the mariachi speak to us in voice over about his situation and how all he wants to do is get to mexico and find some work.

at this point, it seems apparent that we might have two main characters with two different missions and storylines. that, already, is enough to make this an interesting film. what gets even better is that the storylines intersect because azul carries around a guitar case filled with guns, and becomes known for it, to the point where the mariachi now starts to get mistaken for azul. moco’s men come after the mariachi, find him up in his hotel room, and we get a fantastic chase scene out into the streets.

the mariachi ends up not only swinging from a clothesline, using clothing as his trolley, and landing on a bus, but also picking up a gun and killing some of these men. he, of course, has no idea what’s going on and why these men are out to kill him, but he is resourceful enough to survive. and now when moco and azul to continue to call each other, they argue about how many men azul killed. azul killed the men in the prison and then some in a bar, but moco also counts these assassins that came after the mariachi, thinking azul killed them too. the argument about the number of men dead is very funny because it goes on and on as if the number is somehow significant to them. neither man is willing to just let the inaccuracy go, and rodriguez gets a major comedic effect out of the scene.

the mariachi now meets a woman who runs a bar. earlier on he walked into another bar and asked for a job. that bar was owned by moco and they had no use for him. now he enters his second bar, where this woman works behind the counter. she doesn’t have a job for him, but she is willing to help him out after the attack he is just been in. this idea of the lone woman with her own big store who helps the injured stranger is one of many themes from this movie that will be repeated in the rodriguez follow-up film, desperado. it’s a simple plot point that works. especially since the woman is financed by the head bad guy, while she is giving aid to his enemy.

there are plenty of other similarities too. the bad guy might not be exactly the same, but seems very similar as a big boss who sits around barking orders. he even lives in the same lair as the main bad guy from desperado, a sort of old mexican fort, all the way out in the dessert. the main bag guy is named mocco here, and he is named bucho there. and also, both men dress in white while the mariachis dress in black.

the movie has a sort of mythic quality to it. the mariachi story is supposedly a legend about this man who walks around with his unsuspecting weapon… a guitar case filled with guns. the opening scene sets up his reason for being out for vengeance and the way he was double crossed in the past, giving us back story. it also establishes that the main hero and the main villain used to be friends, which is another mythic idea. and it shows them talking on the phone, making threats to each other, having an open line of communication.

the movie is filled with comedy, in many cases orchestrated by the camera shots that rodriguez uses. he loves to zoom in to show us what the main character is thinking, and does it so quickly that each time, it ends up being pretty funny. so, for example, when the men come to kill the mariachi in his hotel room, we hear the men downstairs ask what number room he is in. we hear the room number and then watch a rapid speed zoom into that very same number above the mariachi’s door and then the mariachi’s reaction as he sees it. his reaction is what gets the laugh, but the zoom in is meant to be his point of view, looking up at the number. a similar speed increase for comedic effect occurs when the mariachi shows up at the bar asking for work and the bartender tells him that they already have a mariachi. suddenly a man pops up from a seat in the corner, sets up a keyboard, and begins playing all different intruments just by hitting keys. the whole idea, of this guy just sitting there, ready to go, is funny, and the rapid speed at which he moves and the camera zooms into him, only makes it funnier.

el mariachi is a very good movie. it really has a lot going for it, from the action to the comedy to the mythic story. with the style rodriguez brings to this film, it would have been enough to have a simple revenge plot between the guy who broke out and the evil boss. but rodriguez adds a third dimension in the mariachi, an innocent bystander who gets confused as the hero and caught up in the game. and by eploiting the situation of this poor man, rodriguez gets a lot of humorous moments of confusion. it’s a pretty strong movie, and the subtitles actually add to the humor. rodriguz has a way of putting us into the main character’s shoes through his use of camerawork, and he demonstrates it over and over again here. this is a tremendous breakout film, and a very enjoyable movie.