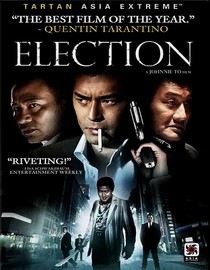 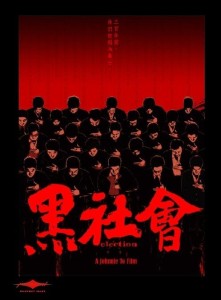 Election is a Chinese movie about a single triad gang and the rise to power of one man. the problem is, knowing who that man is, or will be, becomes the question of the movie. that’s because the plot of the movie focuses around one election between two candidates, and then the rivalry that ensues even after one of the candidates is elected. because this is the Chinese mafia, and not politics, or any system of legality, just because somebody wins, doesn’t mean it has to be accepted.

The two candidates are lok and big d. both are ruthless gangsters, although lok is the one who is definitely more in control. big d is more like a big kid. he’s selfish and rash and he’s the one that more people fear. when the movie opens, we watch multiple scenes of characters discussion the election with each other and talking about who they should vote for. through these conversations we learn of the two candidates and what each one stands for.

Lok is a family man. he honors traditions and elders and is very much in control of himself. big d is more like the joe pesci character from goodfellas or casino. he’s the guy who will use violence to get what he wants, no matter what the cost. when we meet lok, he’s with his son, sitting around the kitchen table. when we meet big d, he’s on a boat, making a man who works for him grind up a ceramic spoon and eat it. of course big d is just joking about making the man eat the spoon, but the man takes him seriously and shows just how intense he is, by actually doing it.

One thing cool about this movie is that the actual election is only the first part of the film. another movie might have made the election last nearly the entire way. this one is more about the aftermath of the results coming in. lok wins the election and big d does not take it lightly. he kidnaps the two elder men who he thinks are most responsible for his loss, locks them into wooden crates, and then drops the crates down the side of a mountain. when they stop rolling at the bottom, he has his men go get the crates, bring them back up to the top, and then drop them again. how these two guys inside the crates don’t die, i don’t know, but they are certainly all beaten and bloody by the time the crates are opened again.

The police are another factor in the mix here, although only a small one. they lock up all of the triad members in the hopes of getting these two camps, the lok camp and the big d camp, to work out their differences. it’s as if the police don’t even mind that a triad system is going on, but just don’t want the violence in the streets that would result from two triad gangs going to war with each other. if lok and big d can work out their problems, then the police will let them, as well as all of the uncles who are also locked up, go.

But lok and big d’s lawyers are too good to let this go on, and it isn’t long before everyone of the triad members is released from prison and no agreement has been worked out. the only thing learned from the prison experience is that big d plans to start a rival society of his own. lok, of course, cannot allow this to happen. in order to officially be sworn in, there is a sacred baton that needs to be found. the former triad leader, whistle, is the only one who knows where it is, and so lok and big d must now have their men hunt to see who can find whistle first.

The hunt for the baton becomes the third act of the film. the first is the election and the second is the prison cells. now is where the movie starts to slow down. it becomes a little tricky trying to understand whose side each character is on. there are multiple chases and beatings that come in the pursuit of the baton. one street fight scene, in particular, might be really well choreographed, but it is pretty tough to figure out exactly who is on which side. if only big d and lok showed up to the scene, things would be so much easier.

Once the baton is found, the movie goes in a pretty straight forward manner. we get scenes of the society coming together for traditional ceremonies involving swearing the new leader in. and then we get to see how things worked out for both candidates, down the line, in the future. it is not what you would expect.

By the end of the movie, the two candidates have found a way to work things out, until one of them brings up old business, and then we get to see the same kind of conflict that started the whole thing. in that way, the movie comes full circle. we also see how lok is the patient one, just like we have been hearing about him all the time.

Election is a cool movie with a pretty tricky plot. what makes it especially complex are all of the different characters and names and trying to keep track of who is on what side. luckily, by the end of the movie, everything starts to fall into place. the final act, (final thirty minutes of the film) starting with the new leader being sworn in, are probably the best thirty minutes of the film, just because of how easy it is to follow. when big d is approached by a rival triad member with a plan for how to kill lok, things don’t quite work out the way one might expect. that could be the theme of election. keeping you guessing, and keeping you on the edge, unable to predict what will happen next. it’s a very cool movie.