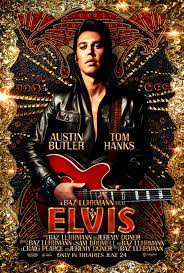 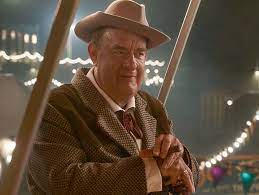 A Baz Luhrman’s spectacle filled with all of his flashy camera work and Tom Hanks’ menacing performance this one definitely has a lot to offer, but would have also benefited from being a little shorter. .

Now this is a cool movie. It doesn’t just tell the story of a wonderful musician, the way Walk the Line or Rocket Man did for Johnny Cash and Elton John, but this one actually tells a complete story with a villain and all. And that villain is the single thing that makes this movie so good. As played by Tom Hanks, (finally playing a villain, after a long career of always playing the good guy,) the Colonel is devious and menacing and clever and manipulative. To believe that he was such a big part of the story of Elvis Presley is pretty amazing. On top of that, Baz Lurhman’s direction really captures all of the razzle-dazzle and pizazz that Elvis was all about. He’s the perfect fit for directing this one. The movie is a little too long, but other than that, it’s pretty great.

Baz Lurhman is the perfect director to make this movie. Let’s start with that, right there. This guy is all about the pizazz and the sparkle and the electricity. He’s about using all kinds of camera trickery, from whipping the camera around through the skies, to sudden and random moments of slow motion, to using split screen to show three or four images at once, like a series of comic book panels, all on the same page. Lurham is about the lights and the energy, and this movie is not just about Elvis, but also about Las Vegas. It’s a pretty solid fit. As a director, Lurhman is by no means incredible, and he has had more stinkers than hits, but with Elvis, Lurhman has found the right project.

His most notable movie, as a director, of course is Moulin Rouge. And most people will say that’s his best. It certainly beats out most of his others, from The Great Gatsby to Australia. And it  had all of the spectacle Lurhman could ever want. But the story was just okay, and the villain was more goofy than menacing. Here, with Elvis, we get a real devious villain, and that’s a large part of the reason why this movie works so well.

The movie, of course, is about Elvis Presley, the one and only, and it’s the breakout performance for Austin Butler, who is most likely bound for monster success and stardom after his turn here. Butler gives a spot on, remarkable performance, really capturing the icon through all of his ups and downs. Elvis seems very three-dimensional here, as a kind-hearted man with talent and courage who was easily duped and deceived by those around him. Butler is most likely bound for Oscar glory with this one, giving a better performance than Rami Malek did for Freddy Mercury in the role that won him an Oscar. And this movie is far more rewatchable than Bohemian Rhapsody too.

The problem with that movie was that there was only one character worthy of the audience’s interest and attention. Here, there are quite a few. The obvious ones, of course, are Elvis and Colonel Tom Parker, the villain of the movie, played by Tom Hanks. And what a juicy role, this one is, But there are other interesting characters too, including both of Elvis’ parents, and of course, Priscilla Preseley, Elvis’ wife. Each is given the time to shine, and in many ways its the quiet performances that are the more memorable. The father, here, who is played by the same actor who played the villain in Moulin Rouge, is so much better as the idiotic goof who has had the wool pulled over his eyes, when he was supposed to be the business manager for his son. But it’s not just the father getting duped. He also has his own best interest in mind more than that of his son, as seen in a moment towards the end when he instructs a doctor to get Elvis on stage by any means necessary, even though his son’s health is clearly at risk in that moment.

But the father, as a villainous character, is small potatoes compared to Colonel Tom Parker. First off, it’s so nice to finally see Tom Hanks play a villain. There are a handful of great actors who have been around and delivered quality performances throughout the many decades of their careers. Denzel Washington, Harrison Ford. Tom Cruise. Anthony Hopkins. These are bankable movie stars who have withstood the test of time. And with this performance by Hanks, they have all officially played a villain once. For Hopkins and Washington, it was Oscar making performances in Silence of the Lambs and Training Day, respectfully. For Ford and Cruise, in What Lies Beneath and Collateral, the results weren’t quite as good, but it was still fun to see them in a different light. Hanks in Elvis splits the difference. He’s great here, and this role definitely pushed him into new territory from the fat suit to the accent. But he doesn’t quite measure up to those Best Actor Oscar classics.

What Hanks does give us here is the dark side to the story. Both Butler and Hanks bring the energy and hold our interest at all times. And it’s a good thing too, because this movie is way too long. At two hours and forty minutes, the biggest problem with the film is its massive length. If epic life-spanning biopic movies used to be able to get away with this before the pandemic, but even then it was a challenge. Now, however, with audiences used to seeing movies in their living rooms for the past few years, the playing field is not the same. There is definitely a good amount of this movie that could have been cut in the interest of picking up the pace. But thankfully there is a dark, threatening story at hand, working its way behind the scenes here, nearly at all times.

This devious tone and atmosphere are all at the hands of Colonel Tom Parker. You see, he narrates the movie. His voice over opens it up, and we see and hear him long before we actually meet Elvis. It’s no wonder Tom Hanks wanted this role, he’s practically the star of the movie. Of course he’s not, in actuality, but he definitely has his hanss in nearly every scene. So what makes this Colonel Tom Parker so menacing and corrupt? Well, for one thing, he’s not actually a Colonel or a Tom or a Parker. His entire identity is made up. The reason why that’s an issue is because he’s an illegal alien who is not allowed to leave America and come back.Once he leaves, he’s gone, and can never return. And the reason why that’s important is because it makes the Colonel not want Elvis to leave for any reason, despite Elvis’ long-held desire to tour around the world. Only the Colonel doesn’t tell Elvis the real reasons for not wanting him to go. Instead he makes things up and manipulates Elvis, and at one point even signs Elvis to a contract that will “hold him prisoner” in Vegas for years, without Elvis even knowing about it or wanting that.

But the movie takes its time building up to this. First we get the story of how Parker met Elvis, hearing him sing over the radio and then going to see him perform. Elvis had a way of moving on the stage, girating and throwing his legs and hips out, shaking to the music in a way that nobody had ever seen before. There’s one scene in particual where Lurhman shows this, as Parker observes the young singer for the first time, and watching every girl in the crowd lose it, is actually a rush. You see, these girls aren’t just screaming. They’re trying to hold back their screams, trying to contain themselves, and they just can’t. Pretty soon Parker is sinking his hooks into Elvis, spying on Elvis with his parents, learning secrets about the family, like how Elvis had a twin brother who died and now the mom says to him that he’s got the strength of two men in him. Parker says that exact same thing to Elvis when the mother is in earshot, hoping she will think it is fate, that Parker said that. It’s just one small example of how manipulative this guy is.

The movie follows Elvis from being one of the low-billed members of Parker’s act to being the only one in the act at all. We see this by watching Elvis’ name move up the poster, through montage, further and further, until suddenly the whole poster is of him. And once he is Parker’s only client, that’s when the real fun starts. First, it’s the government, wanting to put an end to Elvis’ moves and going after Parker in order to do it. They use what they know about the corrupt manager and his fake identity and they threaten him with it. And so Parker manipulates Elvis into changing his act, dressing and singing and moving differently, and when that doesn’t work, he convinces the boy to join the army. It’s either that or be arrested, Parker tells him. When really the truth is it would be Parker, not Elvis, who would be the one going to jail or deported.

In the second half of the movie, Elvis starts standing up to Parker more and more, hiring a private PR company to help him change his act. Their first outing with him is on the set of a Christmas special that Parker has arranged for him to do, where Elvis decides to not sing any Christmas songs at all. This naturally throws the producers into a fit, and it’s up to Parker to do damage control. But the big conflict comes with Vegas. Elvis has always been spending lavishly and has no one to blame for that beside himself. But when he goes to tell Parker that they are ready to go their separate ways with business, Parker has one more trick up his sleeve. He proposes the new International Casino as a place where Elvis can perform and have anything he ever wants, free of charge. The hotel will pick up all of the expenses for the show. And Elvis only has to perform there for six weeks, before he can take his show all over the world. That’s what Parker tells Elvis. But then as soon as the hotel manager mentions keeping Elvis there longer, Parker doesn’t hesitate to write out a contract on a napkin and put it into action. Seeing the movie told from the manipulative, corrupt angle is very intriguing. It’s not what you would expect from a biopic about such a famous and celebrated icon. If only the movie were a little shorter, this one could have been a masterpiece.