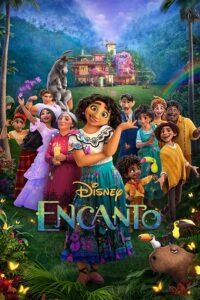 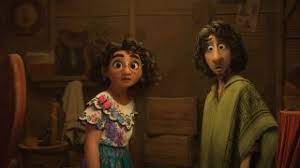 A very unusual Disney movie, it’s like the Incredibles (a family of super powered people,) only instead of fighting evil here, the premise is about what if these people started losing their powers.

Encanto is something different. It’s a Disney movie about a family with super powers (although they aren’t called that, but instead referred to as magic gifts.) And while that might sound a lot like the X-Men, the Fantastic Four, or The Incredibles, there’s actually something very different from those other movies going on here. This one isn’t about fighting crime. Instead, the movie is about what would happen if the characters started losing their powers.

Even that doesn’t sound all that creative, and the movie knows it. So it goes further with its premise. What if the protagonist, a girl named Mirabel, was the only character in the family to not be given a power? Like Coda, this past years best picture winner, which featured a protagonist who was the only character in a deaf family who wasn’t actually deaf, Encanto also wants us to relate to the character as an outsider looking in. Mirabel feels like an outsider in her own family, and that’s in large part because they treat her like one.

The movie opens with the story of how all of this magic got started. A woman and her husband were traveling the land with their three infant children. The man was killed, (since it’s Disney and for kids, we just see him disappear into thin air,) and suddenly in his place sprouted a magical candle. Around the candle grew a giant house (called La Casita,) and the house had magic. The house was “alive.” Think of it as something like Beauty and the Beasts castle where every object from the floors to dishes to cabinets moves.

After hearing the story of this house and how the magic got started, we meet Mirabel who runs around singing a song about all the different members of her family. This song, called “The Family Madrigal,” is great. It’s lively and exciting and really serves as a nice introduction to help the viewer learn all the characters. On top of that, we get this charming situation where three little kids run after her drinking coffee and demanding the answers to questions. It’s fast and funny, but still hard to keep all of the characters straight. That’s ok. This is one of those Disney movies that takes multiple viewings to really get everything down, and there’s nothing wrong with that.

Towards the end of the song, the kids keep asking Mirabel what her power is, and Mirabel continues to avoid the question. And then the song ends and one of her cousins (the one who can hear everything and also has a big mouth,) overheard the question and responds, telling the kids that Mirabel never got a gift. And now we get into Mirabel’s story, as she continues to live in the nursery of the house, the bedroom she shares with a younger cousin, Antonio, and has been in ever since she was born. Let’s talk about the bedrooms for a moment…

Whenever a child in this family comes of age (which apparently means they turn five or six,) there is a ceremony. And at this ceremony, the child walks up the stairs to a door that has magically formed. When the child put his or her hand on the knob and turns it, the door fully forms and now presents a picture of rye child on it. And the child can now  open the door and walk in to a new and magical room. Isabella, whose power is that she can make flowers and plants, has a room covered by flowers and vines. Antonio’s power is that he can hear animals speak and so his room is like a jungle, with all kinds of animals running and flying around.

Antonio revives this gift and room at his ceremony. It’s the big event in the first part of the movie. The song Mirabel sings in the opening is while she is setting up, decorating, and preparing the house. Then we get the conversations leading up to the ceremony with characters like Mirabel’s parents telling her she has nothing to prove. Mirabel also overhears a conversation between her mother and grandmother about how tonight had got yo be hard for Mirabel.

The Grandmother, called La Abuela, is actually the villain of the movie. Just like in Turning Red, the Disney film that was released after this one, where the mom is the villain, this one is about family relationships. This grandmother and mom are not evil, but just overbearing or condescending. They don’t treat their children well, and don’t realize how they are making their children feel. In Encanto, La Abuela constantly blames Mirabel for everything that goes wrong with the house. This gets really bad when Mirabel has a vision about the house starting to break.

This is all during the night of Antonio’s ceremony, and it ends with La Abuela accusing Mirabel of trying to sabotage the event. The next day, however, Mirabel is on a mission to find out what that vision of hers was all about. She asks Dolores, her cousin who can hear everything, if Dolores has heard anyone talking about the house breaking. Dolores points her in the direction of hr sister, Luisa, whose eye was twitching all night because she was nervous about the house. Luisa points Mirabel in the direction of Bruno’s tower, where Mirabel finds even more answers. And while all this is going on, the family is preparing for their next big event, the engagement of Isabella. By the time we get to this dinner party at the house, the place is starting to fall apart, for real this time.

This leads to our big climax, with La Abuela and Mirabel finally having it out with each other. This is a pretty fresh and clever concept. The family with gifts might not be original, and even Disney has done it before with The Incredibles, but this movie has a creative take on it. These characters aren’t superheroes or mutants, like other versions we have seen, but instead, just family members with gifts. And the story is a bit of a mystery with Mirabel trying to uncover what is happening and why it is happening. The answers might not be so clear, but the quest to find them out is a lot of fun, and includes a ton of great songs. Each sister gets their own song from Mirabel’s “I’m not fine,” to Luisa’s “Pressure,” to Isabella’s song about flowers (the weakest of the bunch.) But most of the songs in this movie are fantastic, and the energy and art of the film really catapult it along. The house itself, with all of the tiles that constantly movie, is just amazing. And the story and conflict between Mirabel and La Abuela is pretty interesting and entertaining.