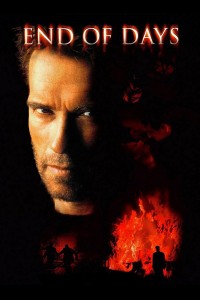 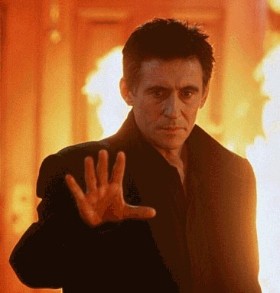 A cross betweem the devil’s advocate and the ninth gate, and the police mystery ends up being the best part of an otherwise mediocre film.

End Of Days is a movie that wants to be a police thriller with some religious twists, yet ends up turning into a supernatural monster movie. the first half is the police thriller and that’s the half that works. so long as they keep the mystery going, everything is running smoothly. but once that mystery ends and the film becomes more about the showdown between the devil and a depressed cop, the movie falls into routine situations and cliched disappointment.

at the start of the film, we watch as a baby is born in a hospital and the nurse secretly rushes the baby down to the basement. she’s not going to kidnap the baby or anything, but just quickly bringing her to a sort of cult leader who puts something on the baby and says a few hocus pocus words and then gives the baby back. the nurse now rushes the baby back upstairs to her mother, and nobody knows the difference.

this baby will grow older and become a girl named christine. she will be the girl who the devil decides he has to sleep with in order to end the world. i’m not sure i really understand why. how does sleeping with christine end the world and why does it have to be her and only her? none of these questions are really answered and they come out on the surface in the second half of the movie, which is another reason why the second half falls apart.

the first half of the movie is about keeping things a secret and making us wonder. so long as we don’t know the real answers, but get more and more mysterious clues, we are happy. but pull back the curtain and reveal the answers, and suddenly we are angry and disappointed. basically the setup in this movie was great, but what it was all leading up to was incredibly lousy.

that first half had jericho (arnold schwartznegger) going on assignment with his partner, Bobby (Kevin Pollack) to protect a wealthy citizen. a man standing in an apartment window takes a shot at the citizen and jericho jumps in front of it to take the bullet. he’s fine, and the next part of the movie becomes about finding this guy who took the shot and figuring out why he did it.

the guy is a priest. we get some cool action, including a scene where schwartnegger hangs from a rope, out of a helicopter, the chases after the priest while he is hanging. the chase ends in a subway tunnel with jericho learning that the priest had no tongue, which is kind of strange since jericho heard him talk. soon jericho and his partner are confronting the church that this priest was a part of and searching for answers. they go to the priest’s apartment too, but find little there other than the man’s severed tongue.

their biggest clue comes when the priest is found murdered and crucified in his hospital room, hanging from the ceiling, with carvings all over his chest. one of the carvings says “christ in new york.” jericho figures out that maybe this could mean “christine york,” and wouldn’t you know it, he’s right. this is pretty much the half way point of the movie.

from here it beccomes much more about jericho vs. the devil. the devil is played by gabriel byrne who has a lot of fun with the role, but let’s face it, he’s no pacino. this movie wants desperately to be the action version of the devil’s advocate, only that movie worked because it wasn’t action. it worked as a thriller in the legal world (i love how both movies take place in ny. what are they trying to say about the devil and his ties to that city?)

we get the devil confront jericho in his apartment and showing him what life could be like if he just turns christine over to him. then we get jericho following his police chief who is in with the devil, to find the devil worshipper’s secret lair. and all of this leads up to midnight on new years eve, which is the final hour where the devil has to sleep with christine.

the whole movie gets more and more silly as it goes on. the plot is always kind of dumb, but at least when it stands as a mystery, one can kind of take it seriously. there are also some confusing elements in understanding that some of the bad guys are devil worhsippers who work for him, while others work for the church and want the devil killed and know that the only way to do this is to kill christine so that the devil can’t sleep with her. none of it is very intelligent. this was a peter hyams film and probably his last big one. hyams had directed movies like timecop and the relic, and by the time of End Of Days, audiences had finally had enough of his ridiculous storylines. even the ending feels right out of the denzel washington film, fallen. this movie tried to combine elements of other films and ended up being a jumbled mess.