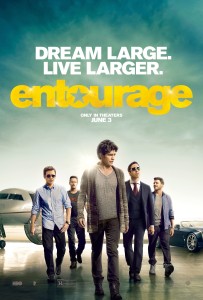 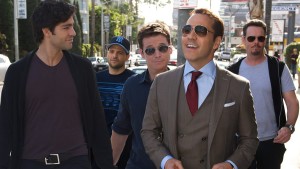 Feels like an episode of the TV show, complete with a paint by the numbers plot, and nothing that should have ever been stretched out into a movie.

While the HBO show was plenty entertaining as a half an hour comedy, the movie just doesn’t work. This isn’t movie quality material or characters. And the storyline feels like something out of a soap opera. It’s all about getting the money to continue making a film, and the key to doing that is taking out a kid who is a total jackass, and convincing him to help them out. That premise is so thin that each individual character has to get his own storyline, and these stories are equally as bad. They all feel like side stories for an episode of a TV show. It’s nice to see the actors and characters we came to love, back to doing the same roles in the same ways, but with nothing new to add, this really did not need to be made into a movie.

Entourage was a fun TV show. It was HBO, which meant it was able to be completely realistic in terms of cursing and sex and guys being guys, but it was also pretty funny. The characters were lively and entertaining, and the storylines were perfect for a thirty minutes comedy show. And that’s exactly where it should have been left. A lot of people are not fans of the show. I am. And I can tell you that watching it translated into a movie just doesn’t work. Neither the storylines now the comedy are worthy of a feature length film, and if they were going to do it, they should have come up with a story that was better than this.

The idea is that Vinny Chase (Adrianne Grenier,) is being recruited by Ari Gold (Jeremy Piven,) his former agent, to now star in Gold’s first movie as head of a studio. There’s just one catch. Chase also wants to direct the movie. And Gold greenlights the project, with no oversight at all. The only problem is that Chase runs out of money and needs more, and getting it from the wealhty tycoon, Larson McCredle, (Billy Bob Thornton,) in Texas who is financing the film turns out to be a bit of an issue.

McCredle sends his son, Travis, (Haley Joel Osment,) out to Los Angeles to check out the movie and report back to his father on whether or not they should be giving Ari and Vinny Chase more movie for the film or not. And that’s the gist of the movie. The boys need to take around this snotty, arrogant kid, and basically kiss his ass so that he will report back to his father in a favorable way about the film, and get them more money. There is no way that this is the storyline for a feature length film. That they thought it could be is totally ridiculous.

It is such a thin story that the problem doesn’t really even arise until about the second half. The first half of the movie is all about the individual characters, catching up with them, and seeing where they are in life. Turtle is extremely wealthy, having made a ton of money on his Tequila company, which is something that happened back on the show. I’m glad that this storyline continued. But his current storyline about trying to get with UFC star Rhonda Roussey, is pretty dumb. Apparently the two of them met once at a party, many years ago, and yet somehow she still remembers him. No way.

Johnny Drama’s (Kevin Dillon,) story is also incredibly stupid. He is having phone sex with the girlfriend of Armie Hammer (The Social Network, The Lone Ranger,) and Hammer walks in and sees it. He witnesses his girlfriend on the phone with Drama and gets rightfully pissed. Now he’s after Drama and Drama spends the movie looking over his shoulder, thinking this guy is going to come and get him. Again, this is a premise for a single episode of a thirty minute TV show, and not a whole lot more.

Eric’s got the most interesting story of the bunch, and that’s not really saying much. His thing is that he’s now a bit of a player. He’s got Sloan (his former girlfriend, from the show,) pregnant with his baby, only the two of them are no longer together. Then there’s the girl who Eric is currently seeing, who breaks up with him pretty early on in the movie. And then there’s the girl he has a one night stand with. Eric ends up sleeping with two different girls on the same day, one in the morning and one at night. And somehow all of these paths get intertwined. It’s a bit like the plot of a soap opera, but at least it’s better than the storylines that the other guys are given.

Part of the problem is that with such a limited story, there is just so much that we actually don’t get to see. For example, when we catch up with Vinny Chase, at the start of the film, he’s throwing a party on a yacht to celebrate his recent divorce. He was together with his former wife for exactly nine days, and then apparently one day they were just looking at each other and realized they had nothing left to say, and so they called the marriage off. It would have been nice to see that. I mean, that story actually sounds kind of interesting. Another thing that’s missing here is visits to the set. Chase is apparently making a movie throughout the first half of the film, and we never see him filming a thing. At one point we do get to watch a scene from the movie, at a DJ club, but that’s after the movie has already been filmed. How about taking us down to the set, like the show used to do?

There’s also a lack of worthwhile celebrities that is kind of alarming, considering how good the show was about rounding them up. That show was like a who’s who of Hollywood. The movie, on the other hand, basically just goes for forgotten actors who once appeared on the show. From Gary Busey to Bob Sagat to David Fostino (the kid from Married With Children,) these are not the best of celebs. Liam Neeson does appear for one quick cameo, and Mark Wahlberg is in the movie, since he’s the producer, but that’s about it. Now consider the show, which featured real movie directors, like James Cameron, and in a single episode, had Matt Damon, Lebron James, and Bono all appear. That’s a better lineup than we get in this entire film. At one point Pharell shows up at a party, and the movie acts like we should be excited about that.

And then there’s the plot, with it’s lousy bit of an ending. It involves an actress (a made-up actress,) that Travis wants to get with. He uses the boys to get close to her even though she can’t stand him at all. And then Travis gets jealous when it seems like other people might have a better shot with her than he does. This is incredibly juvenile. The movie knows that, and rightfully admits it, but even still, it is the main reason behind the problem that the characters are facing, and it is way too simple.

Entourage is not a very good movie simply because it has no intelligence or creativity. Jeremy Piven’s character, Ari, is right back to doing the same old thing, which is yelling at and insulting whoever he can. Now, if he was doing something totally different from his usual character, it would be a problem too, but I guess the thing here is that this is just not funny anymore. The same can be said about the humor with most of the guys. Their banter just isn’t funny. And the individual storylines that they each get involved with are all pretty dumb. I like that the actors stayed true to their characters (except for Eric,) but the movie needed something more. It needed a plot that warranted a movie being made. This feels like a plot that was rejected back when they were making a TV show, and that they somehow decided to use for the movie. It was a huge mistake.