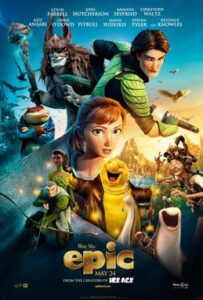 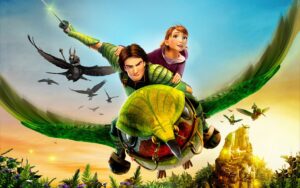 An okay animated movie with cool visuals and ideas, but a pretty simple story.

This is a movie about another world that isn’t really interested in doing much world-building. We are given just two races of characters, a limited amount of locations, and a pretty simple story. It is so simple, in fact, that the characters keep returning back to the same locations to do similar things to what they have already done there. Now, the animation itself and action look great. The movie is fine, as mindless fare. But there is a lot to be desired in terms of both characters and story.

Epic is a movie that tries to create a new fantasy world, but doesn’t really do a whole lot of world building. It’s a movie with a somewhat creative original idea that takes us into a new world, but then only gives us two sides and a fairly simple story. Now granted, this is a kids movie, and doesn’t have to be complex to reach its audience, but when you start giving us a fantasy world, it would be nice if there were more than two races of characters. An example of an animated film that does this right is the Disney movie Onward, with all different races of creatures. Epic isn’t interested in the characters and races as much as it is in its singular story about the Queen passing the torch to the person who will take over for her, while her people are being attacked by an enemy.

The protagonist here is a teenager named Mary Katherine (who goes by MK.) At the start of the movie, she is moving in her father, a man she barely knows and definitely thinks is strange. Why she’s going to live with him now is never explained. What happened to her mother is never explained. Those are some strange decisions by the movie considering it is the very start of the film and they are giving us such limited information. Plenty of movies do things like that as a means of hinting at something that will be revealed later on down the road, but this movie has no reveal, and barely mentions the mother at all. The only thing we learn is that the father, Professor Bomba, has an obsession with his belief that there are little people who live in the forest, and has made it his life’s work to track down these little people, so much so that it cost him his relationship with his wife.

When MK arrives at the house, her father is just as obsessed as usual, ranting and raving about his new discoveries, and tripping all over himself to examine new things he has found. He barely notices that MK is there. She tries to help her father see that his research is ridiculous, and is destroying his life, but of course Professor Bomba won’t listen. He’s got cameras and monitoring systems setup all over the forest, and constantly tracks them. He does this by watching the video feed on monitors and listening to the sounds that are recorded. When MK sees that there is no getting through to her father, she decides to leave. And it is while she is running away, and has run into the woods, chasing after Professor’s pet dog, who has also run off, that she comes across the Queen and shrinks.

By this point, we have spent a decent amount of time with the Leaf People, or the people of the forest as well. We have met Ronin (voiced by Colin Farrell,) the head knight or bodyguard of the Queen. We have met the young apprentice, Nod, (voiced by Josh Hutchinson,) who no longer wants to be a leafman, and instead wants to do his own thing and partake in bird races. We have met the snail and the slug (voiced by Chris O’Dowd and Aziz Ansari,) who are charged with protecting the new pod that the Queen has chosen to develop into something that can help replace her. And we have met the Queen herself, Queen Tara, voiced by Beyonce Knowles. These characters are in constant battle agains the Boggins, an orc-like group of monstrous creatures who want the forest destroyed.

Why they want the forest destroyed is never explained. And why Queen Tara decides that now is the time to pass on the rulership of the forest creatures to another, and to create a new pod, is never explained. She’s still fairly young, and there’s no clear reason for her to retire. Now, of course, when Queen Tara ends up being assassinated, having a replacement for her becomes a necessity. But before that happens, while she is still alive and well, her feeling the need to find a replacement could use a little more explaining.

And now we come to the point where MK stumbles upon Queen Tara right as she has been hit by a Boggins arrow and fallen off the bird she was riding on. Queen Tara goes tumbling to the ground and lands in the hands of MK. At that point, Queen Tara uses her last bit of magic to shrink MK and then pass the pod off to her, telling her to take it to Nim Galuu (a wise old man-like glow worm, voiced by Aerosmith’s Steven Tyler.) MK, of course, has no idea what any of this means and is in shock just to realize that these people of the forest that her father has always been telling her about are actually real. Ronin and his men come upon her and she tells them of the Queen’s dying words. And now, it’s off to reach Nim Galuu’s place, with MK holding onto the glowing pod, that has the spirit of the forest inside of it, until they get there.

Before they can go to Nim Galuu’s, however, they decide to make a pit stop at the race where Nod was supposed to take a dive and lose, but at the last moment decided not to. This gets him into hot water with the bookie who he made a deal with, to go down in the race. Talk about an overused story, this one has been featured everywhere from Pulp Fiction to Snatch. But I suppose in a kids movie, it might still seem fresh to the target audience that hasn’t seen those other films. Ronin rescues Nod from the Bookie Frog, and then takes him along with MK and the snail and slug to reach Nim Galuu’s.

By now, things are starting to feel like they are just going from one place to another, and like there are more questions raised than answers given. For example, why do they need MK to bring the pod to Nim Galuu? Why can’t she just hand the pod over to them, in order for them to do it without her? And another question is why they stop off at the race to rescue Nod. How do they know he is there, and why do they need him to help with the pod? When they reach Nim Galuu’s, there’s a whole bit about scrolls that write down everything that is happening, but we don’t really get much in the ways of answers or even next steps. Instead, the only thing that comes out of this which furthers the plot is that the Boggins attack and take the pod with them. So now our heroes need to go and get it back.

Only they can’t just go right into the Boggin’s hideout. They need to be disguised. Which mean they need to go to MK’s father’s house, where Professor Bomba has a bunch of Boggins armor, and to take some of it with them. If we didn’t feel like the movie was just taking us from one place to another before, without a real plot worth caring about, then we most certainly do now. This is similar to the final SkyWalker Star Wars movie, The Rise of Skywalker, which had the characters pursuing one McGuffin after another, with no real rhyme or reason as to why. The characters get the armor from the house, and then head to the Boggins lair, where they rescue the pod.

And now it’s time for the Boggins to retaliate. Which means they come and attack the Leaf Men once more, and MK realizes that her father has something else that can help him. His phone, which has the sounds of bats on it. So it’s back to see the father once more, and to get him to come outside so that MK can hit the button on his phone and drive all of the Boggins’ bats away. This is all just way too repetitive. As far as action and animation go, this movie is a winner. The action scenes are exciting and well-done. But as far as story and characters go, this one is pretty weak. A movie for kids doesn’t have to work on all different levels, and be smart for adults as well, but most end up being that way. Credit that to Disney who has been making smart movies for decades. Disney has definitely furthered the path for other studios to be successful with more adult animated fare, like the studio Laika, which specializes in Stop-Motion-Animation films, (Coraline and Kubo and the Two Strings.) But Epic shows us that not every animated movie is a smart movie. This one has some nice initial ideas, but ends up having way too many plot holes and inadequacies as it goes on.