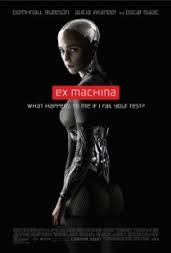 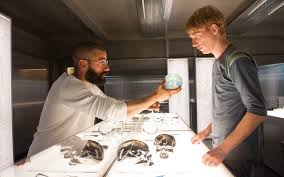 A very cool and somewhat spooky sci-fi movie about artificial intelligence in an isolated setting.

This is an extremely entertaining and enjoyable film. It’s dark and at times disturbing, just the way a movie like this that asks big questions and wants to keep us thrilled, should be. The movie is about a man who wins a contest and is brought to a remote research facility to see what the inventor there has been working on. Think of it like an advance visit to Jurassic Park or the lab from Tim Burton’s Edward Scissorhands, where the scientist was building Edward. Only, here, things take a very suspicious tone, and it’s not necessarily the robot who can’t be trusted. The movie delivers the right level of twists and moments that make us curious. It absolutely keeps us on the edge of our seat, and the limited amount of characters and barren locations definitely add to all of the mystery.

Ex Machina is a very cool science fiction movie. It’s a film that is completely devoted to sci-fi, artificial intelligence, and looking at a complex situation like this under the most basic of circumstances. That’s why there are only three real characters in the film, all isolated together in a huge, but empty research facility. This movie is deep and artistic as hell. It’s the kind of film that Stanley Kubrick would be making if he was alive today. Consider it 2001: A Space Odyssey meets Her. Kubrick was in production to start making the film A.I.: Artificial Intelligence, when he died. Then Speilberg took it over and made it something more dreamy than scary. In Kubrick’s hands, it would have been a whole other movie and probably would have looked a lot like this film.

The movie opens with a young man named Caleb sitting at a computer at work. He clicks on a few things and suddenly lights start flashing on his screen. He has won a contest. Coworkers come over to congratulate him. All of this is shown with music and quick cuts. There is no dialogue yet. From here, we move to Caleb in a helicopter with just one other person, the pilot. Caleb asks how far away they are from the estate and the pilot responds that they’ve been flying over the estate for the past two hours.

When the helicopter sets down, the pilot gives Caleb instructions of where to walk. Caleb can’t believe that the pilot is leaving him there, alone, and is just going to lift off and fly away. The pilot tells him that his instructions say he is not allowed to go any further, but that Caleb must proceed on. All of this is a very cool setup and introduction. It’s the kind of opening that makes us ask questions and become instantly curious about what all the secrecy is about. This is showing, not telling, and really limiting our information in order to feed our curiosity. When Caleb arrives at the doors of the estate, a camera pops out of the wall and snaps a photo of him. This turns into a key card which now ejects itself from the camera and allows Caleb to enter the building.

Once inside, Caleb meets Nathan (Oscar Isaac,) the man who owns the estate. Nathan is a billionaire who is the man responsible for inventing the world’s most heavily used search engine. Think of it like Google. When Caleb meets him, Nathan is on the porch out back, in the middle of a punching bag workout. He tells Caleb that he is hung over and trying to work it off. Caleb asks if there was a party, and Nathan responds that there wasn’t. He just drinks heavily on his own. Nathan sits down with Caleb and tells him a little bit about what he’s been doing there. Basically, he’s been working on inventing artificial intelligence that actually has feelings.

Nathan takes Caleb on a brief tour around the facility. He shows Caleb that his key card will access some doors, but not others. If the key card works, then a light turns blue, and it means that this room is for Caleb. If it doesn’t, then it means the room is restricted. The look of all the technology, doors, and lights here, are all very cool. Caleb is incredibly interested and can’t wait to get started. He even makes a comment to Nathan, saying that if Nathan has really invented A.I. that can feel and simulate a human, than he hasn’t made the greatest discovery of man, he’s made the greatest discovery of god. Nathan writes this quote down, but misrepresents it as Caleb saying to him, that he is not a man, but a god. Caleb tries to correct him on this twice, but Nathan isn’t hearing it. He likes the quotes Caleb gives him, or at least Nathan’s version of them, even if they aren’t completely right.

Before Nathan will show Caleb anything of the A.I. he has designed, he needs Caleb to sign some paperwork. Caleb looks it over and realizes that it is a non-disclosure agreement. Not only that, but it permits Nathan and his lawyers to monitor Caleb in everything he does for a number of years. Caleb doesn’t feel comfortable signing this without a lawyer, but when Nathan explains the regret that Caleb will be feeling in about a year if he doesn’t sign it, Caleb agrees. Now the party gets started. The screen fades to black where the title, Ava: Session 1 appears, and we watch as Caleb meets the robot, Ava, for the very first time.

The movie takes us through about five of these sessions. It’s all part of a test that Nathan and Caleb discuss before even meeting her once. The test is known as the Turing test, and the idea is to see if this machine will exhibit behaviors that are indistinguishable from that of a human. Caleb will be the judge. Each of his sessions will be monitored by Nathan, who is watching via camera from another room. Everything about this seems fine and Caleb is incredibly thrilled until one night there is a power outage. Red emergency lights go on, and Caleb is trapped inside of his room. The power outage only lasts a few minutes, but Caleb is not happy that he was stuck and locked inside.

This is foreshadowing of what is to come. During another power outage, Caleb is in the process of having a conversation with Ava. She has just asked him Nathan is his friend, and Caleb supplied her with an answer. The power outage starts, the lights go red, and suddenly Ava starts talking to Caleb in a totally different way. She tells him that Nathan is not his friend, and that he should not trust this man. As soon as the lights return to normal, Ava goes back to her regular conversation. Apparently when the power outage occurs, Nathan’s cameras go out as well, which means he can no longer see what Caleb and Ava are talking about.

Things suddenly change gears in the relationship between Caleb and Ava. He starts to realize that she is has thoughts and ideas that Nathan is not aware of. On top of that, she begins to flirt with Caleb and he wonders whether or not she was programmed to do this. Nathan explains that she was programmed to be heterosexual and that Caleb is the first man she has ever seen, other than Nathan, who is like her father. Ava starts asking questions to Caleb about whether or not Nathan might switch her off. When Caleb says he doesn’t know, Ava asks why anyone has the right to do that to her.

The movie becomes very much about suspicions, sneaking around, and loyalty. The second half is all about twists and secrets. One thing great about this movie is that there is no clear villain. No character suddenly becomes evil or reveals a hidden agenda. Instead, the characters progress and learn things from each other, and this causes them to change. At least two of the three main characters here, Caleb and Ava, have a story arc, where they change their way of thinking. And the ending is pretty intense and shocking. Aside from all of that, the scenery, look of the film, and spooky music are all fantastic. This is a smart movie. It’s what I Robot should have been if that movie went more for the low key ideas and less for the big budget action. Suppose they had used a human actor for the robots instead of the computer generated cartoon-like creations. That would have been a good start. Ex Machina is the movie that gets it right. This film is detailed and creative. It is equal parts smart and scary, and a hell of a ride.