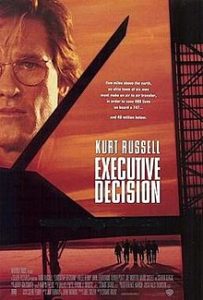 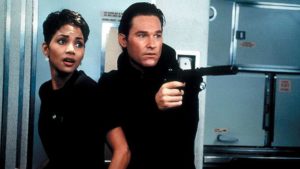 Not a bad action movie, although the action itself is pretty limited and this one is mostly about hiding and waiting on a plane, while trying to defuse a bomb.

Here’s a movie that came out right at the time when the Hollywood craze was all about terrorists attacking passengers. Everything was considered a variation on Die Hard, with the tagline being “Die Hard on a….” And so this movie tried to do something a little different. Especially since we already her out version of a Die Hard on a plane with Passenger 57. What we got in Executive Decision, then, was less action and more story. It only partially worked. There is one original idea, which is a plane to plane boarding by a group of Special Task Force Operatives. All of our heroes, including our protagonist (played by Kurt Russell,) are s part of this, and it becomes the highlight of the film. But the action here is definitely lacking, as most of the movie after the boarding becomes about just sitting around and waiting. Not a bad movie, but could have been better.

Executive Decision was one of those nineties action movies about terrorists and bomb defusing, and larger than life action stars. This movie didn’t have a Schwartzenegger or a Stallone, but it did have Steven Seagal. That was the promise, anyway, although he turned out to only be in the first twenty minutes or so of the film. And maybe that wasn’t such a bad thing afrter all. This movie was from the time when guys like Seagal and Van Damme were at their peak. CGI hadn’t really been invented yet, and so special effects were pretty weak. That meant the thrills and the action had to come from the actors, and so the larger than life action star was king. It’s the reason why guys like  Van Damme, Seagal, and Wesley Snipes became movie stars. Unfortunately, this led to one too many movies feeling exactly the same.

In the decade after Dir Hard, (which really started the terrorist-fighting genre off,) nearly every action movie claimed to be some kind of version of that film. It’s Die Hard on a plane, on a bus, on a naval ship, on a cruise ship, in a hockey arena. But if Executive Decision was merely Die Hard on a plane, then there would be a big problem. We already got that film. Passenger 57 with Wesley Snipes, which really was a fun, but messy movie that equated to just him kicking terrorist ass all over the plane. So this movie, Executive Decision, had to offer us something new, and that meant going to the drawing board and getting creative.

What Executive Decision gave us was the story of a plane being boarded mid-air by a team of special operative American soldiers. And this happened in secrecy, unbeknownst to the terrorists who had control of the plane. After that, the movie was to be about the Americans hiding in the different holes and compartments of the plane, working on the bomb, and waiting patiently until the moment was right to strike. The suspense was there, but what this storyline also meant was a whole lot of sitting around and waiting. Our team spent most of the movie not going anywhere near the terrorists, and so the story dictated that the action would be somewhat lacking.

Luckily the movie featured the kind of cast that we were happy to be on board and in such close quarters with. Kurt Russell, in particular, playing David Grant, a government anti-terrorist agent with a pilots license, was great. He’s one of those actors that plays the everyman in dramas and thrillers better than most. Just look at him in Unlawful Entry, Breakdown, or even a smaller role in Vanilla Sky. This guy is easy to relate to and certainly easy to like. He cane out of John Carpenter 80s movies (The Thing, Escape From New York, Big Trouble in Little China,) that we’re cult hits and nostalgic, and propelled him to stardom. With Executive Decision, however, Russell was taking on his highest profile, biggest-budgeted action movie yet.

Russell’s character, Grant, is the fish out of water. He’s totally out of his element, traveling through the skies with a bunch of marines whip are trained for this sort of thing. And he’s surrounded by guys like Seagal, John Leguizamo, Joe Morton, and Oliver Platt. Not to mention Halle Berry as the friendly flight attendant who ends up risking her neck to help out. It’s not an A list cast, to be sure, but Russell is definitely surrounded with talent here. Seagal might actually be in this movie for the perfect amount of time. He’s not a good actor, and apparently not such a good person, but by limiting his role, the movie finds a way to get the most out of him and actually leave us more.

To combat the lack of action situation, the movie does a couple of things. It finds ways to get action scenes into the beginning, middle, and end. The ending one, of course, is the one that the whole movie is essentially about, where our team strikes against the terrorists, but the way this film finds opportunities to get them into the beginning and middle definitely work. At the beginning, it’s the special forces team raiding an enemy camp. There are supposed to weapons here and bombs, and after the team fights off and kills the enemies at the camp, they discover that the weapons are long gone.

The middle action scene is the plane-boarding, and this is really the highlight of the film. Sure the end action scene is the one we wait for, and build up to, but the single sequence or situation that separates this movie from others in the genre and gives it a unique angle is the mid-air plane to plane boarding. And this movie milks that for all it can. We get the scene where it’s proposed in a board room (by Seagal, who whispers it to the guy next to him,) the scene where engineer Oliver Platt  shows everyone how it will work using a computer simulation program, and finally the actual execution of it, and everything that goes wrong.

The plane to plane connecting tunnel is known as a sleeve. The small plane that our crew takes up looks just like a black stealth bomber. Now considering that this is the coolest and most original part of the movie, the one area they could have spent more time with was being on board this thing. That could have been an opportunity to get to know a little about each character, and what their plan was, and how they felt about it. But instead, the movie seems to be in a rush to get our guys on board the passenger plane, where they will just sit around and wait for another hour. And so before you know it, they are attached to the large plane and climbing through the sleeve from one plane to the other. That’s when turbulence and air pressure cause all kinds of problems, and we are left with some death and sacrifice.

At this point, most of our team is on board, and they now have to spend their time finding a bomb, diffusing it, and attacking the terrorists. This is where the movie hits a snag. Sure there are some cool ideas that we get during this time, such as John Legiizamo in the panel area above the passenger seats, sliding back and forth on a rope while looking down through tiny lenses to see what’s going on below him. And at one point, Grant comes up there, tries sliding on the rope, and nearly falls through the paneling. Grant uses those little lenses positioned throughout the plane for two things..,to locate the head terrorist and then later to put on eyes on a “sleeper,” a terrorist disguised as a passenger, who can set off the bomb from in his seat. But other than this business of sliding around on the top tunnel area of the plane, moving from one lenses to the next, things are kind of dull. There are two guys trying to diffuse a bomb (which we’ve seen a thousand times before,) and then everyone else on the team is in hiding.

Executive Decision is actually one of the better terrorist action movies from this time, but it still has a lot lacking. The ideas might be smarter than the average Arnold or Sky movie, but the action doesn’t quite measure up. It’s a tricky balance, getting both the smarts and the action to both the right levels. This movie is basically the exact opposite of Passenger 57, which goes all in on the action in the skies. Instead here, we have a more original premise about plane to plane boarding, and less than half of the action. The result is an okay movie. Better than one might have expected (considering that we generally go to these kinds of movies for the action,) but not as good as one might have hoped.