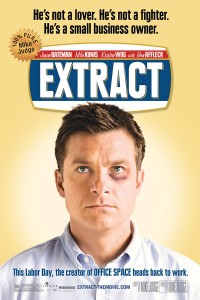 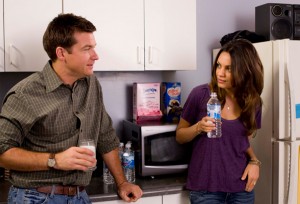 A somewhat funny movie involving clever situations about a working class man and his problems in life.

Extract isn’t anything brilliant or revolutionary, but it is certainly fun. that’s because the storyline has a lot going on, and because some of the actors involved here are natural comedic talents. Jason Bateman, the film’s star, in particular, is always funny so long as the material he’s got is worthwhile. he is a master of comedic timing and delivering punchlines, and here, like in horrible bosses, he is on top of his game. Also on hand here is kristin wiig, who does what she can with her somewhat limited role.

there are other talented cast members too, including Mila Kunis, J.K Simmons, and David Koechner, but the real fun of this movie lies with bateman. he plays joel, the owner of an Extract bottling company who is unhappy at work and unsatisfied at home. Joel’s employees are annoying and give him grief and then he comes home to a wife (Kristin Wiig) who won’t give him any sex. she has a rule about putting on sweat pants and not wanting to take them off again once they go on, and so joel tries to get home before her sweat pants go on every day.

the movie doesn’t begin with joel or his wife. it begins with the antagonist of the film, the character who becomes the villain and shakes things up at the work place. that character, cindy, (mila kunis) opens the movie at a guitar store where she has both of the employees flirting with her and avoiding all other customers at the store. it’s a pretty funny opening. these guys attempt to make pointless conversation with her that they think sounds cool, but really she could care less. she’s a thief and all she wants is the opportunity to steal something, which she gets as soon as the boys rush off to the back room to get something for her.

the storyline has cindy coming to work for joel at the Extract factory. but she’s doing it with a plan in mind. one of the company’s workers, a guy named step, has recently had an accident there. due to some employees not doing their job, a machine malfunctioned and ended up sending a broken piece of hardware right at steps balls. he now has one ball gone and the other one hanging by a thread, a picture made so vivid by a wonderful lawyer speech delivered by gene simmons of kiss.

cindy reads about all of this in the paper. she reads about how step might have millions coming his way if he sues the company. she also reads how he has one ball, and so won’t be able to sleep with her. and suddenly she has a great idea. she going to start working at the factory, get this guy step’s information, start dating him, and influence him to sue the company and get all that money. what her plan is for after that is never explained. was she planning to marry him just to divorce him and get half the loot?

while all of this is happening, there is another storyline going on which is even funnier. because of joel’s problems with his wife and her refusal to have sex, he is tempted to sleep with someone else. cindy is the woman who comes in and starts flirting with joel, so in a sense that plot about the mila kunis character does lead to the second plot, but joel has probably had these ideas about wanting to cheat on his wife, just to get sex from somewhere, for a while now.

he sits around at a bar talking to his buddy ben affleck (so great here, in a supporting role, just contributing and helping out instead of trying to run the show.) affleck plays dean, a bar tender with an interest in drugs and deviant ideas. he gives joel a pill that he thinks is xanax, but turns out to be special K, a horse tranquilizer. and then he convinces joel of his plan.

the plan is that joel feels bad about cheating on his wife, suzie. but what if suzie cheated on joel first? in that case, joel wouldn’t feel as bad and would have a clear line to sleeping with cindy or whoever he wants. so the question then is about how to get suzie to sleep with someone else. that’s where dean uses his connections to get a young gigolo involved. this guy, brad, is dumber than nails, and is going to pose as a pool boy in order to seduce and sleep with suzie.

the whole thing goes according to plan, although not joel’s plan as he realizes the next day when the horse tranquilizer has worn off. he can’t believe what he and dean did and that they really hired this guy. he is running out to get home and stop it when he gets a phone call in the office from brad saying that the job is done. the situation is funny, but what makes it even funnier is that brad now keeps coming back. and joel wants to pay him each time, just so that it’s not like brad slept with his wife for free.

while the mila kunis storyline isn’t really anything special, the joel-pool boy plot makes up for it and is a lot of fun. and then there are side players on hand here who also help the movie along. gene simmons as the lawyer might only have one or two scenes, but he is hilarious. in one of these scenes he repeatedly offers to slam joel’s nuts in the door and see how he likes it. and david koechner as the annoying next door neighbor does his job pretty well. he is certainly annoying and sometimes even a little funny. joel’s reactions to him are, anyway. the movie was made by mike judge, who has had an interesting career starting off in tv land with beavis and butt head and king of the hill. after that he went on to make on of he biggest cult movies of all time, office space, before being brought back down to earth with the

very stupid movie idiocracy (no pun intended.) With Extract, judge is back. it’s not nearly as good as office space, but the movie is still smart and fun and has a lot going it’s way.