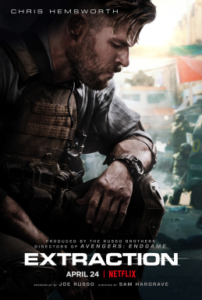 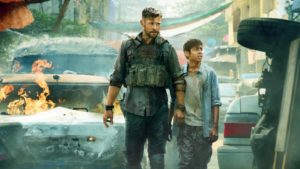 A blow your socks off action-thriller with choreography and stunt work on the level of a John Wick film. The story isn’t great, but the movie more than makes up for it with the action.

Now this is a cool movie. Not so much because of its story, which is just fine, and includes one or two cool twists, but because of its action. The story is more or less what we would come to expect from a movie like this. The twists make the story better than average, but not exactly anything special. What makes this movie special is the action. Wow! This movie is the directorial debut of a stuntman turned director (just like the John Wick movies were,) and you can definitely tell. Like those Wick movies, this one goes all out on the action. Bullets flying through the air basically make up the soundtrack. And the choreography is just terrific. Between tracking shots that follow both the protagonists and villains, hand to hand combat scenes, many scenes that use vehicles as weapons, and a whole ton of incredible shoot outs, this movie delivers on the action in a way that shows some real impressive craft.

Talk about a pleasant surprise. Who knew that this Netflix movie had the explosive energy to be a masterpiece in cinematic action? If you knew the story behind the movie, then maybe you knew. The story is that this movie was directed by a stunt man, taking a chance at directing. Sounds familiar right? It’s the same story as the guys behind the John Wick movies. But we’ll get to them in a little bit. The director of Extraction, Sam Hargrave, has been a stunt coordinator on some of the best action movies of the last ten years. Really the best action movies in the Marvel cannon. The Russo Brothers films. Captain America: The Winter Solider, Captain America Civil War, and the two Avengers Infinity Saga movies (Infinity War and End Game.) Aside from that, he has done stunts on Thor Ragnorak, Deadpool 2, and Atomic Blonde. Now, Atomic Blonde is by one of those John Wick directors, David Leitch (as is Deadpool 2.) So the same way that those directors were spawned by the Matrix directors (they worked on the Matrix movies and learned from that,) this guy was clearly a student of David Leitch and those guys, (I’m actually surprised he didn’t work on any John Wick films.)

So now let’s take a step back and look at the best action movies of all time. The best action movies are films that excel not just in the area of action, but also in the area of storytelling and fun. Movies like Die Hard. But then there are other movies that are just pure adrenaline pumping action with brilliant choreography, masterful tracking shots, and technical wizardry unlike anything we have seen. The Raid was the first movie to accomplish that. The John Wick films were next (all three of them, making it perhaps the best action trilogy of all time – in terms of action choreography.) And now Extraction belongs on that list. In the next movie to climb the totem pole. You can expect to see this director making a lot more movies in the very near future. Look at how Leitch went from John Wick to Atomic Blonde to Deadpool 2 to Hobbs and Shaw. Clearly big action movie directors are in demand over in Hollywood, and this guy has just got his foot right in the door.

But there’s another connection, besides the one to David Leitch and the John Wick boys. There’s also the connection to Marvel. And that’s not just because Hargrave worked on all those other Marvel films. It’s also because the writer of this movie is Joe Russo, one of the Russo Brothers. One of the guys who has brought to life some of Marvel’s biggest and best films, (and is as connected over at Marvel as you get.) And just to cement the deal, and show how connected this guy and this movie are to Marvel, the star of the film is none other than Chris Hemsworth, one of Marvel’s golden boys (one of the three original actors who had his own trilogy, along with Robert Downey Jr and Chris Evans.) So it’s a pretty safe prediction that this guy will end up making a Marvel movie at some point, probably sooner rather than later. But for now, let’s talk about why Extraction is so great.

One word… the action. We start out on a bridge with a guy getting shot at as he walks through deserted vehicles and gunfire. He has been shot and is wounded and seems to be dying. Cut to two days earlier. It had to be that this was either a flash back or a flash forward. With a flash back, they could have given us a lot and told a mini-story in one or two scenes. That would have been better. With a flash forward, they are only giving us a snippet of the ending, and also telling us a little of what the ending will be. It’s a technique that has been used countless times, from Carlito’s Way to A Perfect World, and it usually does more harm than good. In this movie, it is no exception. We don’t need to know that Tyler Rake (Hemsworth,) a mercenary for hire, will end up in this situation. But the purpose of the scene is to get us interested and curious, wondering what events will transpire that can lead him to this, and I suppose with that in mind, the scene accomplishes its job.

Now we cut to two days earlier and see this boy, Ovi at home, the son of a drug lord who is locked away in prison in India. Ovi likes to hang out with his buddies after school, even when his father’s head of security, Saju, tells him he is supposed to come home right away. The next time Saju goes out, it is to a club with his friends, and this is where he is kidnapped. It happens when policemen who are working for the rival drug lord approach Ovi and his friends and shoot one of the friends in the face. All of a sudden, this is a different kind of movie. This is a movie that is not going to hold back. And now, the movie has our attention. The police officers put a bag over Ovi’s head before taking him away.

In the prison where his father is being held, the father is visited by Saju. And he tells Saju that if his son isn’t brought home very soon, the father will have Saju’s family killed. Only there’s a problem. There are only a handful of people who have the skills to recover Ovi from the people who are holding him. Trained mercenaries. And they cost a lot of money. Saju doesn’t have that money. All of the assets of the drug kingpin who he works for have been frozen, while the man is incarcerated. Saju explains all of this to his wife. He tells her he has another idea that just might work. And the next thing we know, we are watching Tyler get a visit in his run down trailer by the woman who runs his agency and is offering him the job. If he wants it, Tyler has to show up at the site where they will take off from in helicopters the next day… sober.

Of course Tyler does show up. And he immediately gets to work being filled in about the mission. He and his crew find the place where they are hiding the boy, and he goes in pretending to be a man who works for the father and has the authorization to pay the ransom. Tyler goes in and sees proof of life in the form of getting to see the kid in person, tied to a chair. Then he leaves, only to turn right back around and bust into the room, fighting every single person there. It’s an elaborate and amazing fight. This is hand to hand combat that would make the Bourne movies look like amateurs. Tyler fights a lot of guys in this sequence, and every fight is choreographed perfectly, with guys seemingly coming out of nowhere and Tyler getting creative in the way he handles each one. This is the first real action scene of the movie and it announces exactly how great the action will be in this film.

After he takes out everyone in the room, Tyler and Ovi are off and running. Everything seems to be going smoothly until suddenly the other members of Tyler’s team are taken out. Somebody knew they were going to be here and was one step ahead. There are still other team members that Tyler gets help from, mainly the female operative who filled him in on everything about this mission (the one who showed up at his trailer.) Her character gets more and more to do as the movie goes on. But for now, Tyler and Ovi are on the the run throughout the city. When they find themselves in an apartment building, we get another fantastic action sequence. This one involves tons of great tracking shots. Sometimes we even follow the villains, as they have no idea where Tyler is hiding. This is the best tracking in an action movie since Atomic Blonde. Clearly Hargrave learned a lot working on that movie.

After this lengthy sequence of moving through the apartment building comes to an end, Tyler and Ovi find themselves down on street level, when suddenly there is a new threat. Saju. He has shown up, and is after Tyler. And Ovi doesn’t know what any of it means. After all, Saju works for his father. Tyler explains to Ovi that something must be up. Maybe Saju is compromised and being paid off by the enemy. But it turns out Saju’s plans are more elaborate than that. He is simply trying to steal Ovi from Tyler so that he doesn’t have to pay Tyler. This is the solution that he came up with earlier in the movie, for not being able to afford Tyler. He would just let Tyler do the rescuing and then kill Tyler to return the boy himself.

Tyler and Ovi continue on the run together, and at one point they get help from one of Tyler’s friends, (played by David Harbour of Stranger Things.) That brief story leads to another cool twist. And it’s all in the ways of getting us from one cool action scene to another. This movie might be an outdoors non-stop chase (or at least it feels like it,) but it definitely has a lot in common with the John Wick films. And I’m not just talking about the stuntman turned director connections. The real connections have to do with the camera movements, stunt choreography, and the bullet sounds that are so heavy and relentless in these films that that  rat-a-tat sound of their echoing for such lengthy amounts of time periods feels and seems like a language or like the background soundtrack. It definitely adds to the atmosphere. If not for the ending, which continues the flash forward from earlier, and turns out a little disappointing, this would be an excellent movie. It’s the one thing not to like in an otherwise pretty excellent film.