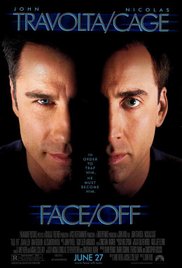 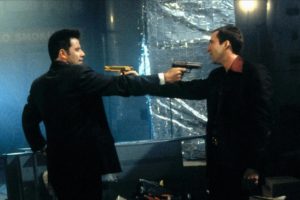 The dialogue is dopey and the face-changing plot is ridiculous,  but the top notch action and ambitious approach go a long way.

They don’t make plots as silly as this one anymore. And if they do, then it’s straight to video for those movies. Certainly nothing with A List talent, like this movie had. But with director John Woo bringing his signature Hong Kong action movie talent to the states, plot wasn’t exactly the thing on everyone’s mind here. The movie deserves some credit for attempting to give us a story we’ve never seen before. And sure, it’s full of holes and totally unrealistic situations, but if you roll with it, the action and over the top performances by Nicholas Cage and John Travolta are enough to make this one kind of fun. Woo is going all out with the action scenes, and the actors are most certainly having fun with their roles, getting to play each other, when the two main characters actually switch faces. The idea is that the cop has to find out where the killer stashed a bomb. And so he resorts to the ultimate disguise to convince others that he actually is the killer. Story-wise, this one is a bit of a mess. But boy is the action fun.

Face / Off is the second American movie by Hong Kong action director John Woo. It’s also the last one where he really got to make his kind of movie. Before that was Broken Arrow, (also starting John Travolta,) and afyer it we’re Wind Talkers and Paycheck, both easily forgettable. And who can forget about Mission Impossible 2, aka the only bad Mission movie of the franchise? With Broken Arrow and Face / Off, and even Mission 2, Woo got to bring his skills to the states and make the B level action movies with A list talent, that he always wanted. Nine of these movies are great, but they are all, at the very least, a good deal of ridiculous fun.

Back in Hong Kong, before ever attempting these American movies, John Woo was a master. His Chow Yun Fat films, Hard Boiled and The Killer are some of best action movies of all time. But with Broken Arrow and Face / Off in particular, suddenly everything seemed less impressive. Woo turned out to just not be the greatest storyteller. In fact, that was the biggest problem with his Mission film. It was overly complicated and completely uninteresting. With Broken Arrow the story was too simple. And with Face / Off, the story was too ridiculous. Poor Woo just couldn’t get it right.

The storyline behind Face / Off is pretty much exactly as it sounds. Two guys literally trade faces. One of those guys is a cop, (Sean Archer.) That’s the character’s name, not the actor. Archer is first played by Travolta and then later played by Cage. Yep, it’s that kind of movie. Archer is after his nemesis Castor Troy, a killer who has somehow evaded authorities for decades. Only in the John Woo world can relationships be as thin as this, where these two are arch rivals and the detective has made it his life’s mission to catch this killer.

But Woo tries to make things personal, by giving Archer more motivation to hate Troy than just because Troy is a killer. In a flashback, presented in black and white, we see that Troy actually targeted Archer once, setting up a sniper rifle to kill him and taking the shot. It was a day when Archer was out with his son, and the bullet went through Archer, killing the boy. So now, years later, Archer has more reasons to hate Troy than just that the man is a killer…. this guy actually murdered his son.

And so Archer has been after Troy ever since. They are arch enemies. Only in a John Woo movie are relationships this simple, where the detective has made it his life’s work to catch this single bad guy. And early on in the movie, Archer gets his chance. Troy is trying to fly out of an airport on a privately funded plane, with his brother, Pollux. The FBI is all over it, to the point where they even have an agent on board. Before the plane can get off the ground, the FBI shows up in cars, speeding down  the runways, and they stop the plane. But Troy escapes. He makes it into the hanger area, where we get a shootout.

Now this is where John Woo excels most as an action director. With shootouts. Say what you want about the msn and his terrible / ridiculous plots, but he makes shootouts look spectacular. He does that by firing off tons of sparks for every bullet that is shot. The corridors, walls, and anywhere else Woo can think of get covered in exploding sparks, amidst the shootout. And at the end of the action scene, Troy gets blown into a wall by a jet engine, and finds himself in a coma.

Only there’s one problem. Troy was planning s bomb in a very public location. The bomb is already set to detonate, and only Troy (and his brother, Pollux,) know where the bomb is. The FBI knows that the bomb is out there, and without Troy, feel like theee is no hope in stopping it. But then a radical idea is proposed, Whst if, through modern medicine and technology, Archer swaps faces with Troy? What if he essentially becomes Troy? Then maybe he can convince Pollux to tell him where the bomb is.

And so the experiment takes place. Considering how insane it is, the movie does a pretty good job of trying to justify as much as possible. That includes talking about body hairs, hairlines, body types, and best of all, voice boxes. We get to hear Nicholas Cage speaking with Travolta’s voice, until the voice box adjustmrntvtajes place. But it’s really just scratching the surface with this situation. For example, there’s no way in hell these two can pass for having the same body, or even head shape. And aside from the physical issues at hand, there’s a ton of non-sensual story problems that suddenly pop up with this situation.

For example, would Archer really not tell his wife about this? And would he really be so convinced that this would work? Not just the face changing, but the entire plan. Even if the race hanging does work, whose to say that Pollux will tell him where the bomb is? The whole thing is crazy, including the idea that Archer (who now looks like Troy,) has to go into a maximum security prison without a single person who works there being told that this isn’t really Castor Troy and that maybe they should give him the help that he might need.

But plot points aside, if we just accept the insanity of s story (and appreciate it for at least trying to be original,) then what we really have is a solid action movie. Travolta and Cage are two of the most crazy over-actors in Hollywood, and this movie gives them permission to really go to town, as if they are trying to one-up each other. It’s sctudlky kind of fun. And Woo brings it with the action and set pieces. There’s a cool prison escape and a great climactic ending that goes from a church shootout to a motorboat fight. This is B movie stuff, but it sure is dopey fun, and it looks fantaatic.