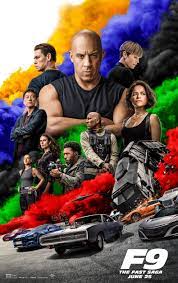 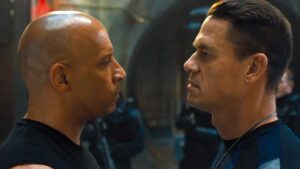 The worst of the series, this one is built around some pretty dumb ideas and features terrible action.

A mess of a movie, this is probably the worst of the franchise (although the one that came before this, #8 was close competition for that title,) F9 has very little to offer. It’s got the charm of bringing as many characters back as possible, which all of these movies tend to do. And yet that trick never seems to get old, or run out of juice. But aside from that, the interesting thing here is some back story involving Dom’s father and brother, and a boat load of flashbacks. Other than that, however this movie is just ridiculous. And it gets worse and worse as it goes on. To say the action is unbelievable is an understatement. You see, it’s always been pretty unbelievable. But here, it doesn’t even look or feel good. Two characters literally go up to outer space in a car. That’s how dumb this thing is. And then action (if you can even call it that,) is so dull that it actually makes the audience stop caring. What a lousy film.

Talk about a bad movie, this has got to be the low bar for the series. It’s a toss up between this and the last movie, The Fate of the Furious (F8,) but that one had the great airplane baby fight with Jason Statham, and also the story about Dom (Vin Diesel,) and the mother of his child. With this new movie, F9, there’s one entertaining back story about a Nascar car race, and that’s about it. But it’s not just that that’s the only thing good in the movie, it’s that everything else is painfully bad. And stupid. We literally get characters going into outer space in a car. And this is not parody. It’s meant to be taken seriously. What a disaster.

The movie opens with the first of many flashbacks to that day at the races. Dom is played by a much younger actor who only kind of resembles him. And he’s helping his father, who is racing in one of those cars, around the track. When one of the other drivers gets frustrated with Dom’s dad, he hits the back of Dom’s father’s car. This sends the car flying into the air, and it explodes while in the middle of the air. It just bursts into flames. This scene and the lousy special effects to make the car combust while in the air are reminiscent of the previous movie, which featured an opening where Dom was driving a car backwards while its engine was on fire. It’s tough to say which moment is worse, but apparently these days the movie has to open with a car on first, while someone is inside driving it.

From there, we end the flashback and cut to Dom and Letty (Michelle Rodriguez,) on a farm. They are raising a kid now named Brian. Now that’s a nice tribute to actor Paul Walker, who died, but in the world of the movie, Brian is still alive. That’s something that gets pretty awkward whenever it’s brought up. Like in this movie, when the characters say that Brian (Paul Walker,) is off watching all of the kids somewhere, both his own and also young Brian, while his wife, Mia (Jordanna Brewster,) is joining the team on their adventure. For now, on the farm, Dom and Letty talk about how they are off the grid now, living the quiet life, and then a car shows up. Dom and Letty pull guns, only to find out it’s their friends come to visit. Now it’s explained that Dom and Letty don’t have a phone, otherwise these guys would have called, but if you don’t have a phone, you can’t exactly be pulling guns on anyone who shows up. It’s not like anyone else has another way of contacting you.

The assignment that Roman (Tyrese Gibson,) Tej (Ludacris,) and Ramsey bring to Dom and Letty is that Mr Nobody (Kurt Russell,) has disappeared. He was on a plane transporting the prisoner Cypher (Charlize Theron,) from one place to another, when the plane was hijacked. We see a broken up video message from Mr Nobody that doesn’t really say a whole lot. And then we have Letty who just takes off and leaves Dom alone with their son. Roman has a throw away line to remind viewers who Cypher is (“that’a the woman who killed the mother of your son,”) as if Dom doesn’t already know that. And soon afterwards, Dom joins the crew on the tarmac of an airport and joins in the mission.

Stop one is to look at the wreckage of Mr Nobody’s plane to see if there’s anything they can use as a clue. These idiots notice that the site, which had a bunch of people there when they arrived, is suddenly empty. They are the only ones there, and they point this out, but don’t realize that they’re about to get attacked or do anything to prepare. What a wasted opportunity for what could have been a cool moment. And now we get multiple gunfights. We literally get a scene where henchmen are firing away at Roman as he runs off in the distance, and every shot of their hits the ground his feet are running on. To its credit, the movie does address this, not in a logical way, but in a self-referential, meta kind of way, with Roman brining up the idea to his friends that maybe they are invincible. To do this, he lists off all of the ridiculous things they’ve done in these movies.

But even that conversation can’t be taken seriously, and is used as a joke for Tej to pretend like he thinks Roman might be onto something, only to turn around and make fun of him. The truth is, Roman is onto something. These guys cannot be killed. Other than Han’s girlfriend, played by Gal Gadot, (who is actually featured in a scene here,) nobody really dies in these movies. Not even Han, who was supposedly dead for a few movies now, or Letty who was supposedly killed in one movie only to turn up with amnesia in another. The gunfight by the plane turns into a car chase with everyone after a half of a strange black device. A McGuffin if ever there was one. And this is where we get the bridge scene that is featured in the trailer, where Dom rams his car into a pole and then off the side of a cliff, only to have the string that is attached to the pole latch onto his car and swing it around the cliff. This might actually be the most ridiculous stunt in the entire franchise. Everything about it is stupid. Even if somehow the string was able to latch on (and how in the world would Dom know that, and be willing to risk his life on it?) it still wouldn’t be able to hold the car in the air and swing it around without breaking.

It’s during the car chase that we meet Dom’s brother, Jakob (John Cena.) He’s the guy who shows up at the end of the scene and grabs the device everybody is after. And now those flashbacks from the opening, about the Nascar car race on the track, get shown to us again, and this time we see a young Jakob (this actor actually does look look like Cena,) andh learn that there’s more to the story of Dom’s father’s death than we know. Dom notices that Jakob was the last one under the hood of their father’s car, and he accuses Jakob of murdering their father, by rigging the car to explode. This is actually a somewhat interesting story. It’s the only interesting story in the entire movie.

Other than that, the movie only has one thing going for it. Its tendency to bring back characters. After nine movies, they’ve build quite a world full of actors, and this movie brings back nearly every one of them. Eva Mendes and the Rock don’t show up, but other than that, the doors just keep on revolving to bring in more familiar faces. And truth be told, it’s kind of cool. At one point, the team splits up into three different missions and every one of them is to find a character from a previous movie. The two girls (Letty and Mia,) go to Tokyo to find Han. Roman, Tej, and Ramsey go to Europe to find the trio from Tokyo Drift, and Dom goes to another part of Europe to find Hellen Mirren (the mother of Deckard Shaw, the Jason Statham character.) This movie even gives us a reunion between all the members of Tokyo Drift, when Han shows up and rejoins the trio from that movie.

But the reunions and familiar faces are absolutely the last decent thing about this movie. And what’s definitely not decent is the action. It’s close to unbearable. Every single thing imaginable is literally thrown at the characters and their cars. I say literally because due to a giant electromagnet, all kinds of massive debris is constantly going sailing through the air, right at our characters. On top of that, cars catch people here. That’s right. A character will go falling off something, and another character will drive a car to get under where the falling character is about to land, as if he’s a baseball player trying to catch a ball in the outfield. How about landing on a car will hurt just as much as landing on the ground?

But this movie doesn’t even attempt to be taken seriously. And that’s something different than the other films in the franchise. They’ve obviously been getting more and more ridiculous as they’ve gone on,  which is why the last movie, where they kicked the torpedo of a submarine, was the worst. Up until now. To think that this franchise started out being about street racing and stolen DVD players. It was about armed truck robberies in the middle of highways. Now it’s about spies and espionage and all sorts of ridiculous things. At one point, Cypher uses a drone stealth bomber, controlled remotely from a chair she sits in as if she is driving a video game at an arcade machine. It’s the same kind of thing we saw in Black Panther, with Emmett Ross remotely operating a plane, and Shuri remotely operating a car earlier. Only there it actually looked cool. Probably because the movie took the time to explain it. Here, nothing is explained. Nothing makes any sense. How that you end up with two characters in space. The last one had been the worst in the franchise, but this new movie sets a new bar for how bad these movies can actually be.