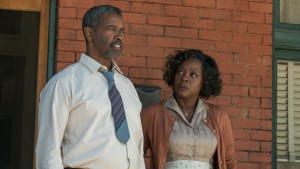 A movie that has some serious rhythm and tone issues, this one does get better as it goes on, but it’s all dialogue and there are way too many dull scenes to keep it afloat the whole way through.

Here’s a movie that was clearly made from a play, and really always meant to be a play. There are few characters, fewer settings, and a script that is pretty much entirely composed of dialogue. And while the pacing is all scrambled and a bit of a mess, some of the characters and performances are pretty rich. Denzel Washington knocks it out of the park as the villainous father and patriarch of the family. Viola Davis as the woman who loves him unconditionally, and looks passed his flaws, is also pretty great. The problem is that the content isn’t always up to the same caliber as the actors. The movie starts off way too fast, then finds its rhythm for a while, but eventually loses it and gets to be too slow. Some of the stories work, but a whole bunch of others don’t. And we are left with an ending that is somewhat interesting, but certainly not climactic at all.

Fences is an okay movie. It is sometimes interesting and sometimes very annoying. Here’s a film that was made from a well-reknowned play, and unlike Doubt or Chicago, or countless other play-turned-films, with this one, you can really tell. Everything about this movie feels like it’s a play, from the very limited amount of sets, to the tiny handful of characters to the way that the movie is pretty much all dialogue. A better movie would have felt like a movie, and drawn us in so that we forgot this once was a play. Fences never makes any attempt to do such things.

Now, there’s nothing wrong with a movie that’s all dialogue. There’s nothing wrong with a movie that is really experimental in any kind of way. So long as that movie is still captivating and entertaining. Locke, the Tom Hardy film from 2014, is a perfect example of that. It’s a movie where the lead actor never leaves his car and spends the entire film on speaker phone calls. And it works because of the compelling storylines that come through. Fences, on the other hand, isn’t half as experimental as that movie, but is most certainly as limited. And a good amount of it does work. But not quite enough to keep us glued to the screen or fully interested at all, (or even most,) times. Basically there aren’t enough storylines or interesting plot points to really make this thing work. And the plot does kick in by about the halfway point,  but what that means, here, is that for about half the movie we are left scratching our heads trying to figure out what this thing is really about, and we are more annoyed than curious.

The opening ten minutes of the film are filled with rapid fire dialogue. The main character, Troy, is a garbage man, returning home from a day of work. He cracks out a bottle and starts drinking with a fellow garbage man. Troy’s wife, Rose, comes outside, and the conversation escalates. Troy is angry about a lot of things, and a good deal of them come out in this scene. He’s angry because he used to be a good ball player, but never got the chance to prove it because of the color of his skin. He’s angry because now he takes out garbage for a living. And he’s angry because in his line of work, black garbage men have to haul the trash while white garbage men get to drive the truck.

The problem isn’t the content of the conversation. What these characters are talking about is fine. The problem is how fast it moves. Characters aren’t listening to each other. They aren’t reacting to each other. And we’re talking about more than just the opening scene. We’re taking about the first ten minutes or so of the film. The characters are more or less speaking over each other. Granted that Troy is drunk, and that sometimes in life people do speak over each other without listening to the other one first, so that they can just say what they want to say, but it’s not exactly the best way to start off a film. The reason why it’s a problem is because it doesn’t give the audience the chance to hear or process what’s being said before other characters start reacting.

Luckily this crazy pacing does indeed change. The spitfire dialogue slows down, and thank goodness for that. The story goes from being about Troy to being about his son, Cory. Troy wants his son to maintain his job at the local A and P,  and not focus so much on playing on the school football team. The problem is that Cory has already told his boss at the store that he won’t be working there during the week anymore. The boss has already hired someone else to take on Cory’s shifts. There’s no solution where Cory can do both. If he works during the week, then he can’t be on the football team. And that’s exactly what Troy wants.

Aside from the story about Cory, there’s also a story about Troy’s brother, Gabriel, a mentally challenged former soldier. Unfortunately the circumstances of this story aren’t nearly as clear or in the forefront as those of Cory’s story. The gist of it is that Troy sends his brother to a cheap home and then keeps the money Gabriel got from the military for himself. That idea is interesting, and these even some question about whether or not Troy really did know what he was signing his brother up for. The problem is that we barely get to see any of this. We only hear about it in one quick line of dialogue.

Even without that element of the story, however, Troy is the villain of this film. Like his Oscar winning role in Training Day, Denzel is playing both the star of the movie and the villain, and that kind of combination is pretty unique. It’s also incredibly cool. Viola Davis might be the one who walked away with an Oscar for this movie, but it is Denzel who really makes the film entertaining. It’s not that his performance is better, it’s that his character is better. He’s the live wire here, the one that we both fear and also are excited by. And Denzel plays the role beautifully.

He’s an angry man who thinks the world has got it in for him. Troy starts the movie out complaining about how only white men get to drive the garbage truck while the black men are in the back hauling the trash. When he finally gets to drive the truck, bu about the halfway point of the film, he ends up hating it. He’s all alone up there everyday with no one to talk to and joke aroind with like he had when was in the back. gets to drive the truck, lonely. Now wants to retire. At this point, Troy can’t go back, so he decides to think about retiring.

There are two great conflicts in the movie and they both come up in the second half. Both of them are ways that Troy wrongs others. The first is with his son. Troy wants the boy off the football team so bad that he goes and speaks with the coach to get him kicked off the team. He tells the coach to cancel the recruiter who was coming to watch Corey play, and that Corey will not be playing for the team any longer. And if that move is bad, or a betrayal of his son’s trust, it’s just the warm-up act considering what happens between Troy and his wife.

There is definitely conflict in this movie, which goes a long way. The problem is the pacing. The first scenes move too fast, taking out of the film right away. Then the movie slows down and all things great, until it starts to get too slow. There might be some conflict in the second half, but it is surrounded by a whole lot of duller, more boring scenes. As a play, I have no doubt that this story must be fantastic.But as a movie it doesn’t work.