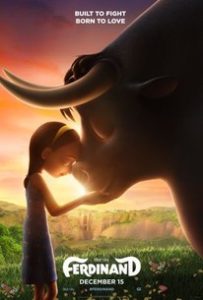 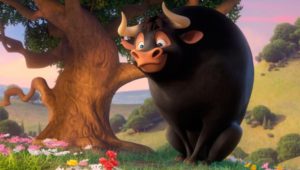 An okay animated movie, with a pretty simple plot, and not a whole lot of creativity to offer.

This is an okay movie. Considering the scope of the animated films these days, which includes everything from Disney to Laika, you can definitely do a whole lot better then this one. While most animated movies work on two levels, one for kids and another for adults, this movie really just works for kids. Adults will notice how familiar and predictable the storyline feels. The movie dies get off to a nice start, but once Ferdinand returns to the bull training farm where he began, the movie starts the feel pretty routine and stays that way for the rest of its duration.

In a time when animated movies are some of the best films around, it’s a bit of a shame to see something as simple, and elementary as Ferdinand. Maybe we need more basic movies for children simply for escapism, but what’s great about most animated movies these days is that they work on two levels. There’s the surface story which is simple enough, and then a deeper level for adults to explore. Look at Kung Fu Panda or Boss Baby when considering this. Sure you have the basic story of an overweight panda kicking butt, or a baby getting his older brother to go on an adventure, but in the deeper levels, Kung Fu Panda is about Zen and meditation and Boss Baby is about corporations. With Ferdinand, what you see is what you get.

Not that the movie is bad, it’s just one of the few films in this genre that doesn’t reach levels of being anything special. From Frozen to Wreck It Ralph to Moana to Coco, Disney has been hitting it out of the park over the past decade with these sorts of films. But they aren’t the only ones. Other studios have brought us movies like Meganind, the LEGO Movie, and the Lego Batman Movie. Even big time directors like Wes Anderson have found a way to get into the medium with movies like Fantastic Mr. Fox and Isle of the Dogs. And then there’s also Laika Studios, the company responsible for Kubo and the Two Strings, Coraline, Paranorman, and Boxtrolls. So there’s a lot out there, in terms of smart animated films.  These movies are fueled by a hunger to give us something both creative and unique. Ferdinand doesn’t share that same hunger.

The movie is basically about a bull in bull-fighting Spain, who does’t want to fight. He wants no part of the competition with a matador and doesn’t understand the reason for fighting. Ferdinand is a very compassionate bull who appeciates the beauty in life. That’s why, when he comes across a flower, Ferdinand tries to protect it from the others. He’s a sensitive introvert. Hardly the kind of bull that goes out there and takes a matador down. And that’s what makes Ferdinand so different from the other bulls in the stable. You can’t get a much more basic plot than that.

At the start of the film, Ferdinand is just a young bull at the ranch with the other bulls his age. Their fathers are like celebrities, running around the stables, getting ready for tryouts. Only one of them will get picked to fight the matador, and as it happens, it’s Ferdinand’s father. He promises to teach Ferdinand all of his moves, even his secret ones, when he comes back, and of course he never does come back. That’s a Disney move, killing off the animal parent in the beginning so that the child has to go out on his own. From Bambi to the Lion King to An American Tale, it only works with animals, because a human child having to survive on his or her own would be a little too much for audiences. But it’s an animal animated movie trope, and when it happens here, it’s completely predictable.

So now Ferdinand’s father has passed on,  and we are deprived of a death scene or of even seeing the body or an outline of the body. We just see an empty truck and have to figure out what happened. And it leads Ferdinand to run away from the stable and find a new home and family in the countryside. At this point, it seems like we are in full Lion King territory. Parent dies, run away from home, find a new life somewhere else, and will return to the stables or to a big fight at the end, against the characters who he was up against in the beginning (the young bulls on the farm, who haven’t been the most friendly.)

Well, luckily this is not the case. Instead of spending most of the movie or the whole middle portion of the film in the countryside, (the way that Simba spent it in the jungle with Timoan and Pumba,) Ferdinand returns to the stables pretty early on. The stable is called Casa De Los Torros (House of the bulls,) and after having a comical mishap at the Flower Festival in town, (gotta love the scene of him trying to move around a room of stacked China glasses and plates without breaking anything, while an old woman polishes the fragile items,) Ferdinand finds himself coming back there. Only now he’s an adult.

And at this point, the first two acts are over and in many ways the real movie begins. Only this is actually where the movie loses its energy and momentum. When Ferdinand was moving around from place to place, we got lively scenes, like that stacked dishes scene or his festival mishap that involved a baby in her stroller swinging on wires like she was doing a zip line. But now that Ferdinand is back at the ranch, it’s business as usual. That means it’s this movies way of saying, “ok, we gave the audience a show, now it’s okay if we just become the same old thing.” This includes new animals at the farm who don’t just talk, but also sing and dance.

So here’s the Catch 22… if Ferdinand stayed away from the ranch until the end, the movie would be just like the Lion King. And with him coming back to the ranch so early, the movie loses some of its energy and settles in to something that feels very familiar and routine. So then what would have been the answer or the right move? Maybe if Ferdinand kept moving around. For example, we all know that the big bull fight will be the ending, but what if there was a bull fight in the middle? That would certainly be a curveball that no one was expecting.

The movie starts to get kind of dopey around the halfway point for a number of reasons. First,  Ferdinand coming back to the ranch means he has to meet a whole bunch of other talking animal characters. These include hedgehogs, a goat, and a trio of German horses. But where were these characters when he was there earlier on? The movie just wasn’t ready to show us them yet. And for another thing, the scene where each animal breaks out into dance is strictly for little kids. They’re not even trying to be smart with that one.

But mainly the problem is that the movie suddenly becomes incredibly predictable at this point. Of course Ferdinand is going to be the bull who gets chosen to fight the matador, and of course he’s going to refuse to fight, even when in the arena. And when the movie decides that this isn’t enough of a climax, and instead decides to have the bulls get loose and run through the streets, it just feels like they’re repeating the same ideas all over again. Ferdinand has now escaped and gone wild three times. First at the start of the film after losing his dad, next at the flower festival, and finally through the city at the end. Talk about running out of new ideas. The movie definitely works in the first half, and even for a little bit after Ferdinand comes back to the farm, (the calming goat, played by SNLs Kate McKinnon, is kind of fun.) But once we start to realize that the farm is where Ferdinand will be spending the rest of the movie, the ambition and energy that propelled the first half start to quickly leave the room.