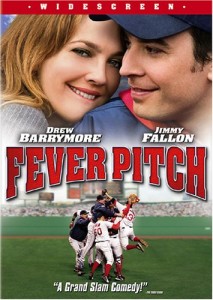 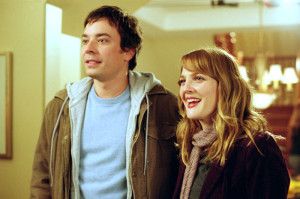 A very funny movie about a man with an obsession and how it interferes with his romantic interests.

there are two reasons why this movie works. the first is the cast. drew barrymore and jimmy fallon are probably not funny in movies more often than they are, but the act of putting them together, just resonates sparks. it helps that both of them have pretty much never been better than they are here. fallon is on his a game, out to prove himself as a movie star and not just an snl cast member, which he was at the time. and barrymore is also out to prove that she can make a decent romantic movie without adam sandler (Yes, the wedding singer is great, but no, it is not because of drew barrymore).

the second and far more important reason why this movie is so good is because of the storyline. this is not a typical romantic comedy plot where boy meets girl, they date, and then she finds out a secret about him…well…okay, it is. but it works here because the secret is so big that it is like a third character in a romantic triangle with the two of them. and also because it’s so stupid. he’s a huge red sox fan. that’s it.

in most movies it’s something much bigger and more personal. the guy knew the girl’s father and promised him that he would look out for the daughter after her father died (that sounds kind of creepy), or the guy had to do with the reason why the girl’s former husband died (bounce, with ben affleck). or the guy is only seeing the girl because he accepted a bet (any number of the versions and retellings of Shakespeare’s taming of the shrew, from she’s all that to 10 things i hate about You).

But the farreley’s have comic gold here, simply because they shy away from all the dramatic love plots and give us something that is intentionally, totally idiotic. he’s a red sox fan. so what? It almost sounds like it’s too simple to make into a real movie. but this movie got a major helping hand from the red sox themselves, and how the year this movie was filmed, the red sox won the world series. it wasn’t expected to happen, and this movie would have been completely different if it hadn’t, but the fact that it did and that the movie was able to use all that, was pretty amazing.

while the red sox weren’t expected to win, or even to get passed the yankees, the part that was always a part of the plan was to make the relationship between ben (fallon) and the red sox, sort of poetic and to use it as an analogy worth comparing to his relationship with Lindsey (barrymore). there’s a hell of a story behind the red sox and the curse of the bambino and how this team has year after year consistently broken the heart of every boston fan. and there is no greater sports fan in the world (no more devoted fan anyway), than a boston red sox fan.

the story involves babe ruth being traded to the yankees and the red sox never regaining their glory again, while the yankees went on to dominate year after year. it’s an amazing rivalry, and the movie has fun exploiting it for everything it’s worth. the story is told and discussed and we really start to feel what it means to be a boston red sox fan.

and then there’s the romance between these two. the idea that lindsey, if she wants to be with ben, has to kind of tailor her life around the red sox. it’s a lot to ask anyone for, and when she realizes how important it is to him, it does start to become a problem. and the two of them handle their arguments and squabbles over the situation nicely. in one funny segment, ben loses it and goes into a sort of binge, where his friends have to come over and rescue him from himself. only he’s not drinking or doing drugs or anything. he’s watching a classic red sox moment, on a loop, over an over again.

the movie is very funny because of moments like these. baseball and the obsession with this team is worked into the script for some very comical jokes. another great one is when ben has his friends over to decide who will come with him to each game, and ends up making them all start dancing to prove how much they want to come. they are trying to out dance each other and it is just so ridiculous looking that it ends up being extremely funny. especially when lindsey walks in and sees the whole thing.

the movie also does a very nice job of bringing in the jobs of these characters as well as their friends and family. it sounds like overkill, but it’s not, because none of the characters are shoved down our throats or put on screen any more than they should be. lindsey’s got her parents and her friends. the friends are a lot of fun. ben has his students and his friends. there aren’t many scenes of him with his students, but of the few there are, every one of them works great. and the romance and chemistry between these actors is superb. fallon is witty and silly here and he gives a performance with the perfect tone, as a character who is not embarrassed with how ridiculous he is. it’s a great movie and for the farrelley brothers, one of their best. right up there with kingpin and there’s something about mary.