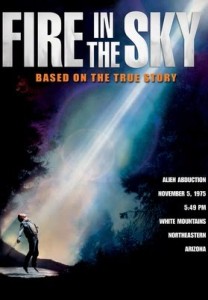 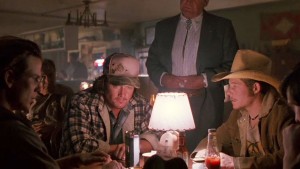 A very cool alien movie that is more about the people involved in an abduction, and the aftermath of the event, then about the aliens themselves.

A pretty wild movie about the aftermath of an alien abduction and what happens to the people who saw it. This film is about as unconventional of an alien movie as you get, and its all the better because of that. The characters here feel like real people in a very unpleasant situation where their friend, who they went out to the woods with, has gone missing, and everybody in town thinks they killed him. The film is about the investigation and the paranoia and town’s mob mentality. It is only slightly about the aliens, and yet it does deliver on what we would hope for. It just makes sure not to overdo it, the way most alien movies do. This movie knows that less is more and that if we care about the characters, and about the human story, then everything else will fall into place. It most certainly does. What a creative and cool movie.

Now this is how you make an alien movie. You don’t go crazy making it about the aliens to the point where after a certain amount of time spent on board the ship, the audience just checks out and starts saying, “this is pretty stupid.” Instead, you make it about the people. You make it their story, filled with setup before we even get near the alien abduction, and loaded with the story of the aftermath and how it affects the people and the town after everyone thinks it is over. This is a movie about a team of lumberjacks who have a contract to go out in the woods and cut down a bunch of trees, and what happens to them one night when they come across something unexpected.

At the start of the movie, we see a pickup truck speeding through the woods, driving like all hell to get out of there. The truck stops at a bar and a bunch of shaken up men pile out. They sit down at a table with a lamp in the center, and the camera moves around them, introducing us to the different characters as we listen to the conversation of their panic and confusion. We don’t learn exactly what happened to them, just yet, but we can tell that it was something powerful. The sheriff walks in and clears the place out from all customers besides these men. Then a special investigator, named Frank Watters (James Garner) walks in and starts asking the real questions. This is the guy who’s gonna break these men down. Or so he thinks. That’s when they begin telling their story.

The story is really told by Mike, (Robert Patrick,) the leader of the team, who is the best friend to Travis, (DB Sweeney,) the man who disappeared. Mike tells of their friendship and of how Travis was in a relationship with Mike’s sister. Then he gets right to it and tells of the day in question and how it started off with some hostility on the drive over. Specifically between Travis and Dallis (Craig Scheffer.) Dallis is the jerk on the team. He’s the tough guy or tough guy wanna-be who makes everyone else pretty miserable by being an overwhelming pessimist and bully. When Travis sticks up for a guy who Dallis is giving a hard time to, Dallis takes it as a threat. He then proceeds to do things to Travis, such as cut down a tree that nearly falls on him, during the rest of the day.

And then there’s the night. These men are driving off, leaving the sight, and suddenly they see something. The sky out in the distance is bright red. They don’t know what it is, but they’ve just got to find out. These men drive right to the site and stare out the windows as an alien ship with bright white lights looms overhead. They all stay in the car freaking out except for one of them… Travis. He gets out and walks right under the ship. Travis isn’t scared. In fact, he’s having a grand old time checking this thing and getting the best view of all, until another light comes on and lifts him into the air, paralyzing his entire body. The light holds him there for a few moments and then tosses his body off to the side as it shuts off.

At this point, the guys in the car do something really stupid and kind of unbelievable. They drive away. The logic is supposed to be that they were so panicked they just high-tailed it out of there, but C’mon. There was no reason to think Travis was dead, which is what these men claim they thought. If they saw Travis’ body disappear or be taken up into the ship or something, that would have been different, but just being thrown off to the side? It’s hard to believe that not a single one of them got out and grabbed him or that they didn’t even drive up to where his body landed to check whether or not he was still breathing.

But these guys left him, and drove off, and just a little while later Mike got an attack of his conscience and decided he needed to drive back. The other guys all got out and waited on the side of the road, and Mike went back to the site on his own. Only Travis wasn’t there anymore. Considering it was pitch black out, if your Mike in that situation and you don’t see Travis’ body, you have to be wondering if you’ve got the right spot or not. Still, this movie doesn’t want to get technical and so it just keeps on moving, never wanting to kill any of its fantastic momentum. Mike picks the boys back up, they drive to this bar, and boom, we are back to where we started the film.

The movie now becomes about the investigation and how these men deal with the town. Everyone thinks that they killed their friend. That means Travis’ older brother, all the people in the town who have known these men their whole lives, the people investigating, and maybe even Mike’s wife. There is a search party sent out into the woods the next day, and they don’t find a thing, (although there’s a nice scare when they dig up a skeleton before realizing that some hunter just buried his dead dog.) Then there’s talk about a lie detector test.

This sends Mike and his right hand man, David, (Peter Berg,) out to find Dallis and see if he’ll take it. The plan is that if one of them is going to take the test, then they’re all gonna take the test. And so they agree. And now we get a scene of the lie detector test being administered, and how it really doesn’t result in anything, other than showing us how frustrated these guys are getting. At the end of the day, they are told that they need to come back for more testing tomorrow, and that’s when Mike tells them off. He says they’ve done everything that the investigators have asked, but now enough is enough.

We get scenes like this one or like the scene in a restaurant where the men are approached about taking the test, and everyone in the restaurant is looking at them. There’s even a scene in a Church with a town meeting and Mike walking in to interrupt and call the people out on the way they are treating these guys, (I can’t believe Mike’s wife was at that meeting.) All of this is meant to show the feelings of the town and how it is effecting our protagonists. It might have been nice to see what some of the other guys were going through as much as we saw Mike, but this movie had an agenda and pretty much stuck to it.

That agenda was to give us the story of these men and this town all the way through until it finally shows us what we’re after for the ending. Without giving anything away, the movie does take a very interesting and unexpected direction in its final act, and fills in all the missing holes, giving us the answers we were hoping for. This really is the way to make an alien movie. You give the audience what they want, but you save it for the end, and make sure not to overdo it. And you tell the human side of the story, which really could be about any crime and missing person situation, and watch as the sparks fly. This could have easily been about a bunch of guys who took a ship out to sea one night, and one of their friends didn’t come back with them. Did he go overboard? The guys just don’t know, and everyone in town thinks they killed him. The movie could have been a story like that or any other variation. The fact that aliens are used, but to such a minimal extent that this movie almost didn’t need them, make it all the better. Less is more and this movie knows that. Especially when you are trying to tell the human story and get the viewer to relate. This movie does exactly that and does it incredibly well.