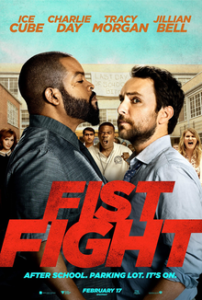 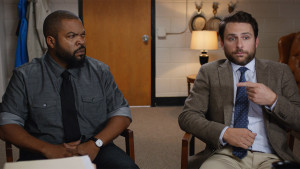 Here’s a film that is all fluff and no filling. It’s a movie that is based on a very thin, basic premise and a straight to the point title. Like Snakes on a Plane, another film where the title probably came first, a movie needs plot. There’s no escaping that. And this film has a very simple situation at the start where one teacher challenges the other to a fist fight, (it’s more of a threat than a challenge,) and then not a whole lot else going on, until the actual fist fight. Charlie Day plays the normal character who is being threatened by tough guy – badass Ice Cube. Day spends the entire movie running around panicking and doing the stupidest of things. Case in point, he buys drugs from a student and then tries to plant them on Cube. And this is supposed to be funny. It isn’t. Nor is anything else in the movie.

Fist Fight is a pretty lousy movie. It’s lousy for one simple reason…it’s just not funny.  None of the actors are used right and that turns out to be a mess. These aren’t exactly Oscar caliber actors at work here. Instead, they’re the kind of guts who can play one note or one type of character, and play it really really well. And in this movie, that’s just not happening.

Charlie Day, an actor who got his big break with the TV show It’s Always Sunny In Philadelphia, is playing the regular joe, straight man. There’s nothing crazy or interesting about him. In fact, he’s prett boring. And that’s not what we want from Charlie Day. We want him to be a little nutty like he is on that show or was in Pacific Rim. Here, he’s giving us more of a variation on his Horrible Bosses character. Now it worked in that movie because he was surrounded by chaos from a boat load of other characters. Here, he’s not.

And that brings us to the next character-actor problem…Ice Cube. Here’s a guy who often picks good roles in funny movies, but most definitely always plays the same part. He’s the angry badass who is super cool. He’s the Sam Jackson of making the rest of us look and feel stupid. His role in the two 21 Jump Street films was perfect. And he’s certainly playing the badass here in Fist Fight again, but this time it doesn’t work.

It doesn’t work because the story is weak, the characters are one-noted, and guts like Cube and Day really aren’t given very much to do. They are put in the middle of one of the most simple and basic stories imaginable, and they might have been okay, if the movie had room to grow. Only this one doesn’t.

Fist Fight comes from the school of simplicity that gave us Hall Pass and Bad Teacher. It’s the idea that they can give us a simple plot of adults acting like kids and call it by a name that references something from childhood. All three of these movies turned out to be pretty awful. You can imagine that these are examples where maybe the title came before the story. Two teachers, one rats the other one out, and the other one challenged the first to s fist Fight. There’s barely enough there for a short, let alone a feature film.

Charlie Day’s character, Andy Campbell, spends the day going from place to place trying to find a solution to his problem. But unlike the classic western High Noon, where a character knew a threat was coming and spent the day preparing for it, Campbell doesn’t actually talk to anyone. He doesn’t sit down with anyone looking for advice. Instead, he tries to buy or sneak his was out of the situation.

He buys a kid a new computer in order for the kid to say his claim against Strickland, (Cube,) was all a lie. When that doesn’t work, Campbell resorts to trying to plant drugs on Strickland. This is so stupid and over the top. Not only is it unbelievable, but it’s also idiotic. So Campbell would rather become a criminal himself by buying drugs off a kid and then planting them on a teacher, than just get beat up. Really?

There are theee other name actors in smaller roles here. All three of them play other teachers in the school. There’s Tracey Morgan, Christina Hendricks, and Jillian Bell. Not a one of them has anything to add. Then there’s Dean Norris (from Breaking Bad,) and Kumail Nanjiani, (Silicon Valley.) Again, nothing. Talented people with nothing to do. Kumail was more memorable in his single scene of Mike and Dave Need Wedding Dates than he was in this piece of garbage.

Perhaps the worst thing about the movie is that for nearly the entire film this one seems to be just stalling and wasting time. We all know that no matter what happens, there will have to be a fist fight for the climax at the end, (you can’t call the movie this and then have the characters find a solution before actually having the fight.) And we all know there will be the problem with Campbell ratting out Strickland at the beginning. But getting from point A to point B is not so easy here, when there’s a whole lot of time to fill in the middle. Maybe the film could have done it by involving other students in worthy roles (like In and Out.) Most certainly the film could have done if it had the sense to give us some subplots. But here, it’s just Campbell running around all day trying to avoid having a fight with Strickland

As bad as Fist Fight is, it’s not terrible. It’s not cringe-worthy or anything. This is not a film that you have to turn off or walk out of. Basically it’s not unwatchable. And that’s probably the best thing that can be said about this movie. The story is interesting enough, in terms of a premise. But boy does it have nowhere to go after that. And with that being the situation, what we really have here is a movie that should never have been made. If all you have is a problem and a title than you don’t have enough to fill one hour, let alone two. This movie barely even tries.