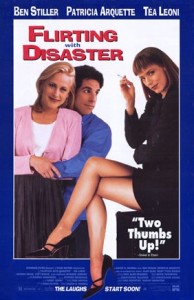 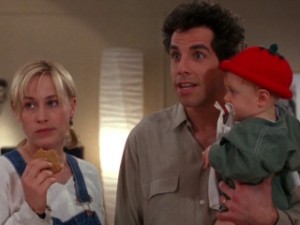 A funny, yet often just a little too ridiculous movie about a family man trying to find his biological parents.

A pretty good movie, this one has a straight forward plot about a man on a mission to find his real parents, but it’s the crazy situations that come across his path in the process, that make this one so much fun. For starters, he isn’t traveling along, or even just with his wife, but Mel Coplin, (Ben Stiller) is on this road trip with his wife, baby, and the adoption agency representative, who he has a thing for. Things get uncomfortable pretty quickly, and the amount of people traveling with them keeps increasing. Each stop they come to is filled with its own madness, but aside from those physical gags, there is also the humor of the relationships, flirtations, and jealousy. This movie is far from brilliant, but it is certainly a lot of fun.

Flirting With Disaster is a wacky little comedy about a man trying to find his biological parents, and all of the chaos that ensues while he’s on this mission. The movie stars Ben Stiller, from right before he hit it big as a movie star. It was directed by David O Russell, who also became a big time name in the directing industry (Silver Linings Playbook, American Hustle,) just years after this film. This movie represents their fun little indie romp, before they were known, filled with witty ideas and unusual circumstances.

Stiller plays Mel Coplin, a neurotic man who has just had a son and now, for the first time, feels the importance of finding his biological parents. This means so much to him, in fact, that he refuses to name his son until he finds them. And his nice, supportive,  (but also rightfully suspicious) wife, Nancy, goes along with it. She’s a sweetheart who feels like she’s been ignored since they had a baby, and Mel started pursuing this out of the blue quest. When we first meet her, all she wants to do is get it on with her husband, and Mel has a completely different focus and passion.

Nancy is literally along for the ride in this movie, traveling with Mel and their baby from place to place. But then again, so is everyone else. The character who Nancy is suspicious of is Tina (Tea Leoni) the adoption agency representative, who comes along with them to document, via video camera, Mel’s reuniting with his parents. Nancy thinks her husband might have feelings for Tina, and she’s not exactly wrong. Throughout the movie, Mel and Tina keep gravitating towards each other, getting closer and closer, and you just know the inevitable is going to eventually happen.

The movie opens with Mel’s voice over playing over shots of lots of different people coming towards the camera, one at a time, and Mel wondering if they’re his parents. Then he starts to imagine some of these people together. It’s a funny scene, with many of these people looking crazy or just not fitting together at all, and it all leads to him talking to Tina about his situation and desire to find his parents. She lets him know the good news at the end of his little rant. She has found them and is ready to take him to meet them.

When Mel gets home, we get that scene where Nancy is all over him. Only he’s not interested at all. He’s got only one thing on his mind, and it’s telling his wife all about the news.  They found his parents. And guess who’s in the next room, waiting to meet Nancy? That’s when she meets Tina for the first time, so you can imagine for Nancy, it’s not the greatest meeting. Here she is, being vulnerable and sexual and not exactly quiet about it, and in the very next room is a stranger who her husband just might have feelings for. What a meeting.

Along with the baby, the three of them travel to the home of the woman they believe to be Mel’s mother. There, Mel sits down with the woman and allows her to study him, directing the way his face looks and his resemblance to other members of their family. Mel takes it all in with incredible enthusiasm. When he hears names mentioned of these family members, he immediately tries to talk Nancy into giving these names to their son, no matter how ridiculous they are. And the scene leads to one of those incredibly bizarre and awkward moments between Mel and Tina. Let’s just say a strange skirt camera fixing leads to Indian wrestling, and that’s just the beginning.

As it happens, this first visit is not what they were looking for. Pretty soon, Mel and the crew are on the road again, headed to another spot where they meet a man who they believe is Mel’s father, despite his criminal-like appearance and attitude. When Mel first meets the him, the man and his friend attack them. After telling his story, however, the man accepts them and even lets Mel drive his truck. Like the Indian Wrestling, this leads to another disaster (get it, the movie’s title.) This one is much worse than the last, to the point where two police detectives need to get involved. And wouldn’t you know it, one of these police detectives, (played by a young Josh Brolin,) knows Nancy from a past life and has a little thing for her.

That would be Agent Tony Kent. He’s part of a gay couple with Paul (Richard Jenkins,) and the two of them also happened to be partners on the force. They start spending enough time with Mel, Nancy, and Tina, (including taking them out to eat that night,) that the next thing you know, they are accepting Nancy’s invitation to come along with them to their next destination. And now what started out as a couple, their baby, and one tag along agency representative, is a whole group of characters. What this leads to is some very funny relationships, like that between Ben and Tony, who both seem to be jealous of the other one, for their interest in Nancy.

The final act leads to another family and another crazy situation, involving drug usage, car chases, and kidnapping. It’s more wackiness, but the funny parts aren’t what happens outside of the home, on the road, as much as they are what happens between the characters in their interactions with each other. Aside from the main group of players who travel around together, the different parental figures who they meet throughout the movie are also a blast. These include Mary Tyler Moore, George Segal, Lily Tomlin, and Alan Alda. Each of them is crazy in his or her own way.

Flirting With Disaster sometimes goes off the rails a little with how strange it gets, (like the climactic scenes, which go a little overboard,) but for the most part, the comedy here works. It’s a sort of mix between black comedy and slapstick, with quite a lot of physical gags, mostly involving Mel and Tina. There are four acts to the movie, one for each of the families they visit, and then the first act, where they go to see Mel’s own parents and tell them about the planned road trip. In each of those acts we get some new, lively characters, and some pretty wild situations. This movie might now have the greatest plot in the world, but it’s certainly got the characters and humor to keep us entertained the whole way through.