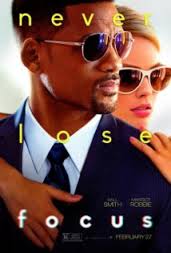 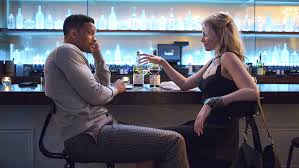 a fine con artist movie where there are some nice surprises here and there, but overall the whole thing doesn’t amount to very much.

Focus is a fine movie that just really isn’t anything special. It’s a movie about con-artists and that right there already should have promise. Especially since Will Smith is the star. This guy looks like he was born to play a sneaky but suave con man, the same way that Ryan Gosling does. And Smith handles the role fine. But the other reason why the movie should have promise is because there should be a loaded deck of clever cons mixed into the story, ready to be thrown in front of us like magic tricks. And that’s where this film falls short. Some of the cons work, but most of them don’t. More often than not, we are left unimpressed, and that is not the feeling you want to have in this kind of a film. It’s like walking away from a movie about magicians, feeling like you just saw the same old, ordinary thing.

Focus is an okay movie. It’s Will Smith in a con-artist film, and the good thing about that is it seems like the kind of movie that should be right up his alley. If Hitch proved anything, it was that Smith could be a smooth operator when he wanted to be, loaded with charm and sneaky, but suave appeal. He’s got that same element working for him here, in Focus, and it’s hardly his fault that the movie itself isn’t anything special.
The fault lies with the story and the specific cons this guy pulls off. They should be a hell of a lot more interesting. Out of approximately three major cons, only one of them is actually kind of cool. That would be the middle con about mentally manipulating someone by surrounding them with an image, without the person ever knowing it. With that one, it’s all about the subconscious and what the person is taking in without realizing it. Too bad the other cons aren’t half as clever as that one.

At the very start of the movie, we meet Nicky, (Smith) as stands on a Manhattan rooftop making calls, trying to get a reservation at an exclusive restaurant. The request is denied, but then we cut to later on that night, and see Nicky sitting at a table at the restaurant after all. The catch is he is there under false pretenses, impersonating a famous chef.

This is the intelligence level that characterizes most of the movie. When Nicky is seduced by a woman who brings him up to her hotel room (Margot Robbie,) we can see everything coming a mile away. The good news is, this scene being such a cliche is kind of the point, and Nicky sees what’s coming too. A man bursts into the room claiming to be the woman’s husband, aiming a gun at Nicky and barking threats. That’s when Nicky dares the man to shoot him, knowing full well that the whole thing is a shake down.

From here, we get Nicky taking Robbie under his wing. He starts training her, teaching her the art of stealing. Nicky brings her to a secluded outdoor area at Lincoln Center and starts showing her a few tricks. Basically it comes down to just lifting a watch or pocket book by using a distraction. “I touch you here so you don’t notice me touching you there,” Nicky tells her.

The two of them now go to New Orleans to see if Robbie really has what it takes. They start out on Bourbon Street, surrounded by tourists, as Robbie steals watches and wallets from people, left and right. Nicky has a bunch of friends there, helping Robbie make the hand-offs so that as soon as she grabs something, she gives it off to someone else, and can never be caught with it by her victim.

It’s Superbowl weekend down there and Nicky has employed a team of people to work at the hotel and steal all weekend long. They make a ton of money and then everyone leaves. Nicky is left with all of their earnings, holding onto the stash until a later time. He is warned by one of the team members, not to gamble with it. Only Nicky doesn’t listen.
There’s a sequence with an Asian man, who is million dollar gambler, and he and Nicky go at it for a while. Nicky keeps losing and with every new bet, he increased the amount on the table tremendously. This is not a very fun scene, and there are loads of unrealistic circumstances, where the whole plan would fall apart if one little coincidence didn’t work out. Even still, the punchline at the end of the sequence is fantastic.

That brings us to our final con, which is so big and so long that it basically takes up the second half of the movie. It’s now a few years later, and the con takes place in Buenos Aires, South America, where Nicky has been hired by a car racing team. He is hired by mogul Rodrigo Santoro to sell the competition some fake information about Rodrigo’s car. That means Nicky has to start by impersonating a disgruntled mechanic who works on Rodrigo’s cars.

Things start getting interesting when Nicky finds out that Robbie is dating Santoro. Either somebody is playing someone or that is way too big of a coincidence. This is the sort of thing that makes us incredibly suspicious. And that ends up being the big problem with this movie… you can never trust anyone. The film seems like it’s always trying to be one step ahead. Now that would be a good thing if it was actually true. But seeming like it is ahead of us is not the same thing as actually being ahead of us, and therin lies the cause for alarm. From the Asian gambler scene where we thought maybe Robbie was in on it with him, the trust just isn’t there.

This element is so prominently featured throughout the film, that it causes the viewer to be constantly suspicious and expecting something big. The result is that the twists that do appear feel pretty weak. It’s a matter of expectations really, and building up what’s coming down the line, a little too heavily. We constantly think our two leads are trying to pull one over on the other, and so we are searching endlessly for the big twist. I suppose that is not the fault of the movie, but more of a flaw with our society and the state of affairs that movies are in these days. There is always an end twist, even if the movie would be just fine wihtout it. And the problem with Focus, a movie that probably should have one of these surprise endings more than most, is that whatever twists really are there, are hardly anything great. The ending feels like a bit of a let down to a movie that was only moderately interesting to begin with. There are definitely things to like about this movie, including Will Smith being the best and most likeable he’s been in a while, but ultimately the storyline just doesn’t make the cut.