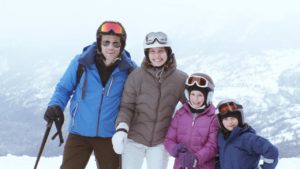 A very cool movie about an avalanche that takes place while a family is away on vacation, and the way that the father reacts to it impacts his relationship with his family. When the avalanche hits, the father, Tomas, runs away from the table, leaving his family behind. The rest of the movie is the aftermath of this, with his wife, Ebba, naturally upset. To make matters worse, Tomas is in denial, refusing to admit what happened. And this only makes things worse. The movie does have some slow parts, but for the most part, it’s pretty interesting and goes in some unusual directions towards the end. On top of that, there’s fantastic music and great scenery that captures both the ski slops and the isolation of hanging around the huge, yet quiet hotel. In many ways, this atmosphere feels like that of The Shining. This is good company to be in, and then movie definitely gets into the headspace of its characters while raising some real and important questions.

Force Majeure is unique. And that’s putting it mildly. Only a foreign movie could get away with something like this, being psychological and metal instead of being action packed or overly dramatic. This movie is about the aftermath of an avalanche. The avalanche itself is probably the most brief part of the movie. That’s because this is not a disaster film or anything of the sort. It’s about how characters react to disaster, and how those reactions impact their lives and their relationships with loved ones.

This is a movie about something real. It’s about a family on vacation in the mountains at a ski resort and how when this avalanche hits, the father runs away from the table, leaving his wife and two children to fend for themselves. Apparently he grabbed his phone and gloves and ran, which only makes his leaving the table even worse. This man, Tomas, not only did the action, but then he denies it, saying that he remembers things differently when confronted about it. Talk about digging himself a digger hole.

The movie takes place entirely in the mountains at this ski resort, and what that means is we get tons of scenes of the characters outside in the white snow, or of them walking around the deserted hotel. They have multiple conversations in the hallway of their giant hotel, standing outside of their room so their children can’t hear them. This sort of thing happens so often that the maintenance worker at the hotel keeps reappearing in scenes. Between the snowy scenes and the quiet hotel scenes, in many ways this has a feel like the Shining. Especially since we rarely see other characters in the hotel.

The event that drives this movie happens in the first twenty minutes. And then it’s over, and we have the rest of the film to deal with the repercussions. At first, Tomas and his wife, Ebba, don’t speak about what happened. They just go on with their lives as if everything is normal. That’s probably for the interest of their kids, since when they finally do have a moment away from their children, the discussion about what happens comes out. Only Tomas and Ebba are not alone. They go out to dinner with another couple, a woman who is friends with Ebba and the younger American man she has picked up. And that’s when the story comes out. Ebba tells it, of course, and Tomas is in complete denial.

At this point Ebba agrees to drop it, and that the two of them will move on. And for a while everything seems fine. Another couple comes to town who is friends with this family. This is Mats and Fanny, (Mats is played by Kristofer Hivju, better known as Tormand the red beard, red haired Wildling from Game of Thrones.) And it’s while hanging out with this couple that the story comes to the surface once again.

Now, on the one hand there’s the issue of Ebba brining it up again, when she said she was passed it and willing to move on. But on the other hand, her bringing it up around this couple is totally understandable considering that theses  are good friends who she feels comfortable around, and needs to confide in about a problem she is having. The movie might have benefitted from handling this a little differently then just having Ebba tell the couple, similarly to how she told the other couple, earlier on. What if she just told the woman, Fanny, in private? And then if Fanny told Mats, and then Mat confronted Tomas about it. That would have been something different, but at least this time when Ebba tells the couple about what happened, she doesn’t tell it in a comedic, laughing at her husband kind of way. This time, she is clearly upset.

Ebba tells the couple about how she needed help with the kids, with getting them to safety and how she couldn’t carry both of them, and when she looked up, her husband was nowhere to be found. And Tomas again denies the entire thing. That’s when Mats jumps in to try and help. He explains that sometimes, in times of emergency, people act a certain way without thinking that they are not proud of and that they would never do if they had the time to consider the situation properly. Ebba agrees, only she says that at least, then, the person should have the decency to admit to it afterwards.

The only problem with this is that it suddenly makes things kind of predictable. At this point, the movie has telegraphed a way that the film can end, with Tomas admitting to what he did and apologizing, and with the characters forgiving each other and moving on. Luckily that’s not it. Not all of it, anyway. Before we get to the ending, we get the funniest scene in the movie with the two men sitting at an outdoor bar in lounge chairs, drinking some beer. A woman comes up to Tomas and tells him that her friend says he’s the best looking guy at the bar. Then she leaves. The camera stays on Tomas as he lets this compliment go to his head, and we can clearly see it on his face. Then the woman comes back and says she made a mistake. Her friend wasn’t talking about Tomas. She was talking about someone else. Seeing the change in Tomas’ reaction is hilarious.

That scene serves as a comedic break from the overall story about the avalanche. After that, we return to the story, for Tomas to confront his wife and children about what he did. Only the movie doesn’t end here. Yes, it’s the climax, but there’s still a way to go. There are two scenes that follow it, which are each important in their own way. First there’s Tomas going to rescue his wife, when she gets injured. This is his redemption scene, only is he really doing all that much? He leaves his kids on the mountain and then walks up to get his wife. He then carries Ebba down in his arms. Sure, it makes him look and feel heroic, but at no point was he in any danger himself, with this one.

And then there’s the final scene with the characters on the bus and an out of control bus driver. This guy is a mess and clearly doesn’t know how to drive a bus. He keeps stopping short and bumping into things on the side of the mountain. And Ebba is the one who is the most upset about it. Noticing that his wife is so worked up and unhappy about this driver, you would expect Tomas to do something. Only he doesn’t. It’s Ebba who eventually says she’s had it, and demands the bus driver to stop, so she can get off. All of this shows that Tomas has not really changed. It’s the honest ending as opposed to the happy Hollywood one, which is a promise that the events of the avalanche and actions of Tomas will never happen again. This ending is smarter and more realistic. The movie is clever and unique and examines a real issue from the perspectives of the characters. The music is absolutely amazing in this movie and swells to such powerful notes that it infuses the movie with a certain level of importance. It’s just one more reason why this is a pretty cool and special film.