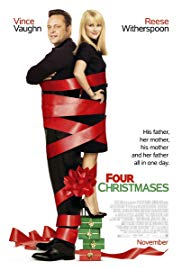 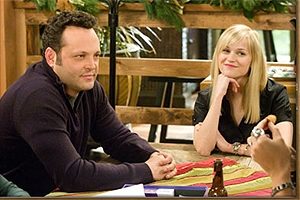 An okay Christmas movie where the premise is pretty average, and some of the humor works, while other parts fall pretty flat.

This movie is just okay. It’s not one of the worst Vince Vaughn movies, but it’s also far from one of the better ones. Consider this on about the same level as the Break Up. Maybe it’s a little worse. And that’s saying something, considering that the Break Up was about half romantic drama, and only half comedy. Similarly, with Four Christmases, only about half of the comedy actually works. The idea of taking this couple to four different locations, where they will meet four different sets of characters (with some overlap of siblings,) feels pretty creative and fresh. The only thing we’ve seen close to that is Four Rooms, where a bellhop visits four different hotel rooms in the same night, and finds himself in four different stories. In Four Christmases, some of the houses are funny, and some aren’t. The humor certainly isn’t anything great, but Vince Vaughn does what he can for the film, and definitely gives us some laughs.

Four Christmases is an okay movie. It’s a film that has a fine premise, and is actually kind of clever in the way that it sets up four different locations or short stories. The problem is that, like Four Rooms, a movie based around a similar overall idea, not all of the houses work. In that movie, if every room was as great as the best one, than it would have been one hell of a film. Similarly here, the first two houses that a couple visits are pretty good, but boy does the movie go downhill after that. As a comedy, this movie has a few laughs, the same way that most Vince Vaughn movies do, but there’s no doubt that the great movies this guy once turned out, (movies like Swingers, Old School, and Wedding Crashers,) are long behind him. At this point, he’s basically doing a parody of himself, and it doesn’t exactly spell funny.

The premise here is actually far better than the usual Vince Vaughn movie premise. Like The Break-Up, (his other movie which features a bunch of adults sitting around playing a “can you guess the word,” game,) this one takes a pretty basic concept and finds a unique approach. With this movie, the basic concept is going home for the holidays, or lying to your parents about why you can’t go home. And the idea here is that both parents of both members of a couple are divorced, which means in order to visit all four parents, the couple has to go to all four houses.

But before we get anywhere near that, we meet the couple at a bar as they pretend to be other people, picking each other up. It’s a fun scene with Vince Vaughn’s character, Brad, playing a nerdy type, stumbling over pick-up lines, and Reese Witherspoon’s Kate, being the tough as nails girl who flatly rejects him. Until he turns it up and stops being so nice. Now the bad boy comes out and it works. We think we are watching the scene of how these two got together, and it’s a lot of fun, until we realize that they are actually just pretending, and have really been together for years. It’s a little early in the movie to be throwing us for a twist. We haven’t even met the characters yet, and already they’re lying to us. Still, at least the two seem to have personality and chemistry, and so the scene (even with the lie / twist,) does get the movie off on an entertaining note.

And then we get this idea about how every year they tell their parents they can’t come home for Christmas because they are doing charity work in another country. Whether it’s building homes or helping out with babies, these two act like they’ve covered all their bases, (Brad learns how to say Merry Christmas in Burmese,) but here’s a big one that they somehow forgot…photos. Social Media was around when this movie was made, but even if it wasn’t. How about a scene of paying some kids to act like the ones they say they are helping out? The movie thinks it is more clever than it is with this idea. It wants us to believe that these two have the perfect life, and so it gives us a scene of them packing suitcase while wearing snorkel masks and dancing around. Even if the vacation is great, the packing of the suitcases scene seems a little ridiculous.

But the movie does pickup when the characters arrive at the first house. This house belongs to Brad’s father, played by Robert Duvall, and it’s pretty great. In fact, it is by far the best house in the movie. Duvall is playing a man’s man who doesn’t like new, fancy things, and doesn’t have time for anything other than his routines. He’s got a big, old fashioned TV, and so when Brad shows up with a satellite dish as a present, (which Duvall keeps calling a satellite,) it doesn’t quite go over so well. This house is pure physical comedy. There are the wrestling brothers who insist on constantly beating Brad up, (played by John Favreau and Tim McGraw,) and there’s a scene of installing the satelite dish, which goes incredibly wrong. And as far as supporting characters, aside from the father and brothers, we also get Favreau’s wife, played by Katy Mixon, (coming off of Eastbound and Down, and playing the same sort of tough redneck here,) who is a lot of fun.

That first house works for a whole bunch of reasons. The physical comedy is great, but it’s really Vince Vaughn who sells it. Just like he did in Wedding Crashers, during the football scene where he kept getting run over by Bradley Cooper, Vaughn sells being in pain better than anyone. Unfortunately at the next house, the movie tries to do the exact same thing with Reese Witherspoon, and it doesn’t work at all. This time, it’s Kate’s mother’s house, and she similarly finds herself being tortured by her mom and sister. They tell stories of how unpopular Kate was growing up, show Brad photo albums filled with unflattering photos of Kate, and then watch from the living room while Kate gets beat up in a bouncy castle, (called a Jump Jump here,) by a bunch of little kids. It’s not funny. Not even when Kate sticks up herself and starts throwing the kids around.

But the house gets better when the family goes to church. This is no ordinary church. It’s a rock n’ roll like show, being put on by the pastor, (played by Dwight Yoakim of Wedding Crashers.) He needs two volunteers to play Mary and Joseph, and wouldn’t you know it, Brad and Kate are chosen for the parts. Forget the unrealistic situation of how those roles would be available, or why in the world the church would pick two strangers to fill the spots. The performance scene itself is pretty funny with Brad getting really into character and focussing all of his energy on his performance, without ever giving a second thought to how Kate is doing. And she isn’t doing very good. Kate is on stage practically having a panic attack, and Brad not only doesn’t notice, but starts insulting her to the crowd for not being able to swaddle the baby. It’s actually kind of funny, and once again, the scene works because of the way that Vaughn sells it. But by the time this scene ends, his routine is starting to get a little old and tiring, and starting with the next house, things just aren’t that interesting anymore.

The third house is the one where they play “guess the word,” game. The situation here is that Brad’s mother, (played by Sissy Spaycek,) is now dating the guy who used to be his best friend, (the guy who plays Sue in Swingers.) It’s more gross than funny, although the way they keep throwing it in Brad’s face is definitely worth a chuckle. Especially when one of the clues involves the couple talking about what they dripped on each other during sex. But for the most part this is not smart humor. And it doesn’t get any funnier when Brad and Kate can’t get any questions right.

By the last house, the movie has given up on humor. Now it’s time to focus on the plot, or the inevitable breakup between the characters, as Brad and Kate go their separate ways. Brad goes back to his fathers, where Duval uses some great reverse psychology on his son, telling his son he is proud of him for turning Kate down. But over at Kate’s father’s place, (played by John Voight,) all we get is a serious talk from her dad about how he wishes he had been around more for his kids. The funny thing is, his advice doesn’t even make sense. His advice is about honesty, but Kate was already honest with Brad, and that’s exactly what drove him away.

At the end of the day, some of the houses are funny and some aren’t, but not a one of them is anything special. The first is the funniest, and that’s a shame, because what it really means is that the movie is all downhill from there. In terms of just the basics of what happens at the first house, it is by far the one with the most slapstick and physical comedy. Maybe that should have been saved for one of the middle houses, when the movie needed a pick-me-up or reenergizing scene. But it works in ways the other houses don’t because of Vaughn (and also Favreau,) two old friends in real life, who play off of each other so well. In this movie, Favreau barely talks and he’s still one of the funniest characters in the film. Considering that two houses work and two houses don’t it’s pretty safe to say this is just an okay movie, and far from anything great.