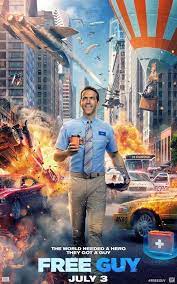 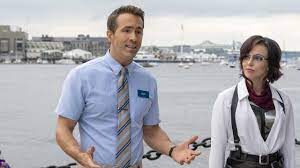 A better than expected movie about a video game world mixed with reality, this one is surprisingly clever.

A movie that is nearly solid the whole way through, there’s a very fun and creative premise here (although it does feel a bit like The Truman Show meets Pleasantville,) and the way they combine those reality show-like ideas with a video game world are pretty great. The movie is about a character inside of a videogame, trying to figure out his life. Consider it the next evolution of the ideas that were started in Wreck It Ralph. And at the same time as we have that story inside of the videogame, we also have another story outside of the game, in the real world, that deals with its creators. All of this is pretty cool. The problems, like using Taika Waititi as the main villain, aren’t anything major, and for the most part this movie is enjoyable.

Free Guy is exactly what you would hope for and nothing like what you would expect. That is to say, when you hear the concept of this movie the immediate thought is, “that sounds like a pretty cool idea.” But then reality sets in, you see the trailer, start to think about it a little more, and realize that most likely the movie won’t be very good. And so you stop expecting it to be. Turns out though… this one actually is.

Most movies that exist on one single idea start off clever enough and then burn out quickly afterwards. They have a nice setup, but then nowhere to go afterwards. Free Guy is not one of those movies. Instead, it is a movie that actually lives up to the hype and the potential. Now, it’s not a great movie (maybe if it had been rated R, it could have been,) and it does start to get a little tiresome in the second half, but for the most part, this one is a success, that goes way further with its concepts than anyone would have expected.

The movie is about a guy who lives inside of a videogame world and is actually a character. He’s the kind of guy who is trapped in the world, which means bound by those rules and unable to do anything that isn’t in his code, for his character to do. Or so he thinks. The reality is that this character Guy, (played by Ryan Reynolds,) has never thought about being or doing anything else. Neither have any of the other NPCs (non-playable characters.) It’s a little like The Truman Show meets Pleasantville, with the characters having an awakening and realizing that they are just pawns in the machine, wondering what’s outside of the machine.

Regarding the game itself, what we have here is an open-world video game. And that’s the area where this movie is really new. This is the first movie to parody Fortnite, an open-world, battle royale game, that has been the most popular action shooter game for over five years now. And there’s a ton in this movie that shows it is definitely meant to reference that game, from the Pink Easter Bunny outfit one character wears, to the way characters take weapons, put them behind their backs and then the weapons disappear (meaning the character now has that weapon stored in his / her arsenal,) to the way they just pull out hang-gliders and soar whenever they are falling through the air.

The main difference, however, is that unlike Fortnite, this is not an every character for himself, Battle Royale – only one survivor wins kind of game. And maybe that’s a good thing, considering the Hunger Games movies already took the survival game idea and ran with it for an entire trilogy. So, we’ve already had our share of all that. But what we have here, with Free Guy feels like something new. Especially because we don’t just spend time with the video game characters, but also with the players in the real world who are controlling them. In fact, that is the idea that really pushes this thing over the edge. The notion that we can be watching two movies at once, both in different worlds, where one set of characters is actually controlling the other set.

And for the most part, that’s the case. Millie (Jodie Comer,) in the real world controls the character Molotov Girl in the game. Keys and Mouser, two technicians, also play the game and pop up as characters (Mouser is the one one who dons the pink bunny suit when he is in the game.) In fact, it is only Guy and his best friend, Buddy (played by Lil Rel Howry,) who are NPCs and therefore are not being controlled by any player outside of the game. But the story that does unfold outside of the game becomes just as interesting as the one happening in it. In the game, Guy, comes across Molotov Girl, has feelings for her, and snaps out of his one-track way of thinking to realize he can start doing other things in the game, besides what he is scripted to do. Outside of the game, we’ve got the story of technicians trying to prove that a game they invented was ripped off and stolen from them.

The cool thing is that all of this not only fit together, it unfolds in such a way that one story leads to the other. For example, in the story of the character Guy, inside of the game, Keys (played by Joe Keery of the Netflix show Stranger Things,) is one of the characters hunting Guy down. Outside of the game, however, Keys is one of the technicians, and he’s one of the two characters who thinks his game has been ripped off. The other character who thinks this is Millie, and she also exists in two worlds, both in the game and outside of it. So there’s a lot going on here, and a pretty elaborate story. Certainly more elaborate than one might expect.

It’s also pretty cool how Keys changes from a bad guy to a good guy depending on which half of the movie you’re in. Plenty of movies have the villain change by the end, and grow a heart of something like that, as a character arc, but this is something different. Here, you don’t just have that tacked on, corny ending, but instead this is a matter of learning more about a character. You think he’s a bad guy, or a henchman working for the bad guy, and it turns out there’s a lot more story to him. This includes back story about both his relationship with Millie, and also the betrayal that has happened to him by his boss, played by Taika Waitit.

Now, let’s talk about Taika Waiti for a moment. This guy is an uber talented director. He single handedly took the Thor franchise,  which was at a very low point (Thor: The Dark World is commonly regarded as the worst Marvel movie,) and made it both relevant and great (Waiti directed Thor: Ragnorak, which pumped new life into the franchise.) Waiti is a comedy genius as a director (his movie What We Do In The Shadows is probably his high point.) But he is not an actor. He’s a guy who puts himself in his own movies, and that’a all fine, but now he’s acting in other movies, and it’a getting a little carried away. Just a week or two ago, he popped up in The Suicide Squad. Now, I’m all for people switching roles, or trying new things (so many actors try directing,) but this guy is just not very good as an actor. He’s more goofy than funny, and not very believable at all. Here, in Free Guy, he plays the villain, and he’s not exactly menacing.

For the most part the movie is very good. Waiti was the wrong choice to play the villain, and things do start to feel a little convoluted towards the end, but even still, this thing went way further than anyone could have expected. For Ryan Reynolds, it’s his best movie since Deadpool, and probably his second best movie, following Deadpool as well. That’s because this one really feels like a Ryan Reynolds movie, with his sense of humor. It’s sharp, witty, and clever. The story has multiple levels and even multiple stories. For example, there’s a main story here that the star of the movie, Guy, is not even a part of. That would be the story of Keys and Millie and their struggle against corrupt and thieving boss Taika Waiti. The movie isn’t fantastic, but it is pretty good, and a lot better than one might have expected.