From Paris With Love ** 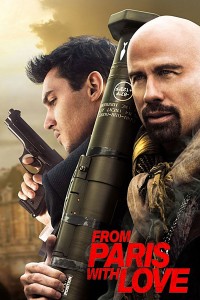 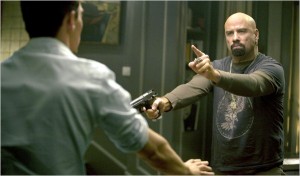 A pretty dumb and unfunny action movie, where even the action is lousy and only gets decent in the second half of the film.

From Paris With Love is a movie by pierre morel. That’s the guy who directed taken, an amazing action movie that hit at the exact right moment, when nobody thought liam neeson could do action. that movies was dark and gritty and very much to the point. it didn’t play games with what kind of movie it was. unfortunately, From Paris With Love, which wants to be a combination of action, comedy, and romance, doesn’t fall into the same category.

before Taken, morel made the foreign movie district b13. that movie, like taken, had a sort of b movie, very much to the point without any plot intricacies, kind of feel. and the action was superb. in fact, it’s probably one of the coolest action movies i’ve ever seen. so twice, this director proved that he could be an amazing action filmmaker. the problem is, like with many directors, they are great when they are working with a limited budget. but once their success goes to their head and people start throwing more money at them, they can’t keep things so simple anymore.

and that’s why we get from paris, with love, a movie that is incredibly stupid and comes very close to being an absolute disaster. the movie is about a partnership between two spies working overseas, in paris. these are american spies, and one of them is a by the book newcomer, while the other is a wild and crazy rogue agent who does things his own way. this is a formula that we’ve seen a thousand times before, from lethal weapon to training day.

but there are problems here. lots of them. first of all, we don’t even meet the john travolta character (the rogue agent, named charlie wax) until a good twenty minutes into the film. considering the movie is only ninety minutes long, that’s nearly a quarter of the movie. and travolta is absolutely the life of this film. those first twenty minutes, before meeting him, are incredibly boring.

that’s because of two reasons. first, the jonathan rhys meyers character, james reece, who is the main character of the movie, is incredibly dull. i know these movies always need a straight man and the straight man has to be the guy who is more tame and down to earth, but this dude is practically lifeless. i’m a big fan of meyers as an actor, and we was superb in both the cable show the tudors, as well as his starring role in the woody allen film match point. but in this movie, doing an american accent and putting no energy into the performance, he’s pretty lame.

the second reason why the movie starts out so bad is because there’s no action. we get scenes of him playing his older boss in chess, and having a romantic dinner with his girlfriend on the balcony, but there is just no action to be found. the closest thing we get is a scene in garage with loud music that rises in volume, telling us something exciting is about to happen, when really we just see guys get into a car and drive off.

and then charlie wax appears, and the movie doesn’t really get any better. this character, as played by mr. travolta, looks like an extreme pirate. he’s got a bald head, a closely cropped goatee, and an earring in one of his ears. he also talks loud and fast and is kind of annoying. especially in his introduction scene where he is arguing with a security guard over getting energy drinks into paris and being kind of an asshole to the guy he’s arguing with.

when wax gets into the movie, the action does start up, only it’s not very good. there’s an action scene in a chinese restaurant, then one in a garage, and then one of the stairway of an apartment building. none of them are done well. maybe it’s because we’ve seen better action scenes in these exact same locations, from hard boiled to the protector to casino royale. but more likely it’s because this movie tried to be lazy, going for attempted laughs instead of clever choreography. wax takes out guys like he’s taking candy off the shelf, without any real effort. it doesn’t even seem like he’s working at it, and if the movie doesn’t care enough to try, then why should we care about what happens to him?

luckily in about the third section of the movie, things suddenly get a little better. actually a lot better, when you consider how bad they were before. there is a major surprise involving a main character, and as soon as that surprise hits, the action actually gets a little better too. we get a rooftop chase that is filmed better than anything that came before it, and then a cool bazooka launching on the highway scene.

the third act isn’t anything special, but it’s certainly the best part of the movie. at least we get some decent action for the first time all day. the real problem with from paris with love is that it tries so hard to be a comedy and fails miserably in that department. john travolta is not funny. he just isn’t. if liam neeson had tried to be funny in taken, i’m sure that movie would have been a lot more like this one, which means not nearly as cool as it was. travola is annoying, rhys meyers is dull, and the movie makes tons of mistakes in it’s first two-thirds. the final portion does get a little better, but it’s not enough. this movie is the follow up to a masterpiece. we’ve all seen what morel can do, so it’s a shame that he kind of sells out here and gives the studio something much fluffier and generic than what he is capable of.