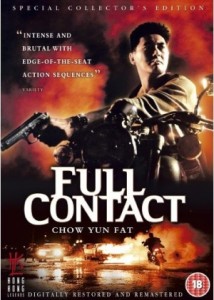 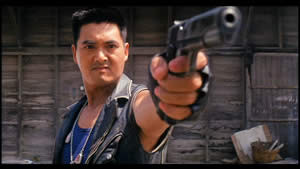 A very cool action movie with some great visuals as well as a cool plot about gangs and betrayal.

Full Contact is a fantastic action movie with a pretty cool story at its heart. it’s the story of two rival gangs that team up together and then turn on each other. when one character is sold out, betrayed, and left for dead, it becomes a movie about him recovering, retraining, and coming back for revenge. at that point it might be like other films that we’ve seen before, but this movie does have it’s own take on the genre. unlike Kill Bill, the crow, or any other takes on this storyline, full contact is about a man who was betrayed by two different sets of people, some that he forgives and some that he is out to kill. the ones who he forgives become his allies. the story is good, but it’s the action that really drive this movie. every stunt is fantastic with top notch choreography and superb ideas for how to present the same kinds of stunts we have seen before. every bit of the action feels fresh in this movie, and that’s because of the clever ways that each stunt is presented. it’s a great action movie with a better than average storyline.

Full contact is a great movie. it’s one of the rare action films where the storyline is almost as good as the action. that’s because it’s got a plot that involves multiple gangs and best friends betraying each other. in many ways this almost feels like it could have been based off a shakespere play, with the main characters being family members instead of friends. the plot is strong, and that goes a long way, but the action is pretty top rate as well, and that’s what pushes the movie over the edge into being great.

at the very start of the film, we are with a gang of villains as they hold up a rare antique store. we meet the leader of this three person gang, named judge. he’s the guy who is the most ruhtless and calls all the shots. we also meet virgin, who is obsessed with sex and with turning other guys on. she is never serious, and her character is one of the few that is annoying in this movie. virgin is the comic relief of the film. and then there’s madman, waiting in the car, who pulls a giant machine gun out on two police officers and fires away. between that and the moment of judge stabbing a woman in cold blood, you can tell right away from this early scene that it is going to be a cool movie. the action is done in such a way that it feels more explosive and in your face than usual. whatever weapons will be pulled and used, this directore ringo lam, will find the most unique and fun ways to show them.

after meeting this first gang during their robbery, we follow jeffrey (chow yun fat) on his motorcycle as he rides off to meet a crime boss in a garage. there’s a huge crime boss who is holding and torturring one of jeff’s friends, named sam, because sam owes him money. jeff shows up and fights off the men who are holding sam. the fight involves swords and knives, and the choreography is great, but the art is there too, as can be seen in moments like when jeff lets rain water wash the blood off the knife he is holding out.

jeff and sam escape and meet up with another friend of theirs and we learn that the three of them need to find a way to repay this crime boss quickly. so they join up with the gang who we saw in the opening robbery and plan to pull off a heist. only the crime boss has secretly made a deal with judge, the leader of that other gang, telling him that he will only get paid if jeff is killed. this is the first act of betrayal. the two gangs of three members each join together to pull of the heist, but as soon as it’s done, judge starts opening fire on jeff’s friends.

the real surprise comes when sam crosses over to judge’s gang and shoots jeff. sam feels like he has no choice and like jeff is a sitting duck, stuck in a house that is burning down while the other gang stands outside. to sam, his only chance of survival is to join this gang by killing his friend. and so he walks into the house and shoots jeff. only jeff doesn’t die, and instead gets himself together, taking time to retrain himself and prepare to seek vengeance. in lots of ways this whole storyline reminded me of the crow or the bruce lee film, game of death, where a character who was left for dead came back to seek revenge and the characters he was targeting didn’t know if he had survived or if this was a ghost.

the movie has fun with the ghost idea, having jeff toy with sam and appear to him for the first time, while by the side of a secluded indoor pool at night. jeff does the same thing to the woman who used to be his wife, mona, and is now with sam. he only appears to her while she is swimming under water, looking up at the surfact above the pool. by the time she pops her head up, he is gone, and she is left wondering if it was her imagination.

the betrayal by sam is the big event that leads to the rest of the movie. everything else is about jeff getting vengeance. he feels that he has been crossed by everyone, even mona. there is the crime boss who gave the assignment to the judge to kill jeff. then there is the judge and his gang, who carried out the assignment. and then there is sam, who was jeff’s best friend until he turned around and shot him.

i like that jeff and sam basically team up together in the second half of the movie, both of them feeling like the gang members and crime bosses are the real enemies. jeff is not happy with sam, but he understands that his freind felt like he had no choice. and sam is furious that the judge made him shoot his own friend and now will do anything to help jeff out. sam feels like he owes jeff and knows that jeff would be in the right to exact revenge on him. so he helps jeff find where the judge is keeping his weapons and together the two of them go on a raid of the ice factory where these weapons are being stored.

the second half of the movie has one climax after another. first is the ice factory, and then it’s to a night club where bullets go flying through the air in slow in such a way that just looks fantastic. we get to see the bullets, but at the same time, it’s not slow motion. instead, we follow each bullet, tracking behind it and zooming into it’s target. i love that this feature was held back until the end of the film, saving something for the final action scene and keeping us surprised. and the way those bullets go slamming through glass or into someone’s head, with blasting sound effects, is just fantastic.

full contact is great because every part of the story works. the first half introduces us to rival gangs and leads us to the big heist where there is massive betrayal. following the heist, we are in recovery mode, where characters have to retrain and relearn to use weapons. and then it’s vengeance time. this movie finds the perfect tone in combining dark and gritty violence with slight bits of humor (sam at the beginning, and virgin throughout.) the only thing that’s not great about it, is that it does follow a plotline that we’ve seen before. the story about the hero being left for dead, before he comes back to the town to get his revenge has been done over and over again, and luckily most tellings of the story, such as kill bill, have been pretty good. full contact is another one of those. it is very stylish and fun and a great movie, even if it does tell a somewhat familiar story.