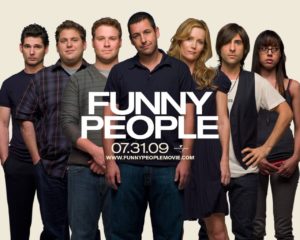 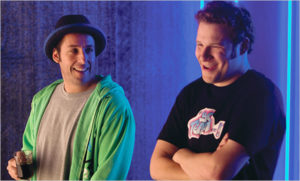 It’s not a bad movie, and the concept is definitely interesting, but at two and a half hours, this one is about a full hour longer than it should have been.

Funny People is a decent movie that could have easily been great, The premise is there. So is the comedy and the cast. The only problem is how long this movie is. At two and a half hours, the longer this thing goes on, the more tiring it gets. That being said, for the first hour and a half or so, we’ve got a pretty great film. This is the movie where Adam Sandler comes together with Seth Rogen and the Judd Apatow camp to make a movie about standup comics. It’s also the story about the more famous one, who is now a movie star (Sandler,) finding out that he’s sick and possibly dying and hiring Rogen to write jokes for him, (but also to be his unofficial best friend.) For the first hour this movie is fantastic, smart, funny, and even kind of deep. But then new plot lines start forming out of nowhere when the movie should be heading toward a climax and resolution. The fact that this movie goes on a full hour longer than it should have is a problem, and it only goes to show what this movie could have been if a little more discipline had been applied.

Funny People is director Judd Apatow’s attempt at a semi-serious movie. He proved he could do it with comedy with the 40 Year Old Virgin and Knocked Up, and now Apatow wants to show off what he can do with drama. The way he does this is by setting the movie in a comedic world… the world of stand up comics. It’s the perfect sandbox for this director, (who was and still is a stand-up comic himself,) to play in. The only problem is the drama angle. And more specifically, how long the movie takes to get us there. This movie should have been about an hour and a half long. By the time the film hits the one hour mark, we feel like we have seen most of the film. We are really for it to start winding down and moving toward a conclusion. But instead, there’s still an hour and a half left. That’s right. This is a two and a half hour film. Whole plot lines don’t even get started until we are already an hour and a half into the movie. It’s pretty ridiculous.

So the question then is, does this movie really have that much of a plot to tell? Did it need to be two and a half hours long. The answer is most definitely no. In fact, the shorter and more concise it is, the better. Leave the audience wanting more. At an hour and a half, (short as that might sound,) this would have been a perfect film. Whatever storylines got tagged onto the last hour weren’t worth another hour of sitting there watching for that much longer. You see, we already liked the characters and their world, and their story. But there is a such thing as too much, and this movie just doesn’t know when to quit.

The film has two protagonists, who are pretty much on equal footing here. These characters are Ira (Seth Rogen,) and George (Adam Sandler.) The cool thing about casting these two guys is that they are from two completely different schools of comedy. Sandler is from the nineties Saturday Night Live Days. He was one of the founding members of that SNL group that included Chris Farley, David Spade, Chris Rock, and Mike Meyers. After Sandler, there was a second wave of comedic actors, known as the frat pack. This group included SNL cast member Will Ferrell. It also featured guys like Vince Vaughn, Ben Stiller, Jack Black, and the Wilson brothers, Owen and Luke. Well, Seth Rogen is part of the third wave of comedy in two decades (Rogen’s group broke out around the year 2007, with both Knocked Up and Superbad.) The SNL representatives from his group would be Bill Hader and Kristin Wiig. So with Sandler and Rogen together, we are getting the old and the new, and members of two different groups of comedy.

And the movie is to some extent about that. Sandler is playing George Simmons,  the mega movie star who everyone knows and loves. His movies might not be great, (just like real life Adam Sandler’s movies,) but they are fun and dumb, and people get a kick out of them. We even get to see clips from some of them, like a movie called The Redo, where Sandler plays a baby with an adult’s head. But Simmons is more than just a movie star. He’s also a stand up comic. And at the start of the film, he goes into a doctor’s office and is diagnosed with a type of cancer. From here, he leaves, takes pictures with people just like he did on the way in to see the doctor, and we get a very different feeling this time. Instead of it being all fun and games, like when he was walking in, this time we feel for him and the lousy situation where he has to pretend to be happy with taking these pictures, while really being super depressed inside.

From here we switch gears and start following the Seth Rogen character, Ira. We watch Ira at work, cutting meat at a deli counter in a grocery store, where he chats it up with the RZA, who plays another coworker there. We also see Ira at home with two roommates. There’s Leo (Jonah Hill,) and Mark (Jason Schwartzman.) Ira sleeps on the couch in the living room and doesn’t pay any rent. His roommates are also in the entertainment business, and are both doing much better than he is. Leo is a fellow stand-up comic who has mild success, and Mark is the star of a popular TV show called “Yo Teach,” which basically makes fun of Dangerous Minds. We get to see a number of scenes from that show, and while the show itself is intentionally stupid, watching the characters laugh at it is a lot of fun.

Every one of these characters is great. It’s nice that we get to see clips from the movies of Simmons and from the TV show of Ira’s roommate. But at a certain point enough is enough. Not that any of these things should have been cut, but the romantic storyline that takes up the last hour of the film most definitely should have. After we spend a number of scenes with Ira and become familiar with his life and friends, we go to a comedy club with him and watch him do standup. That’s where we run into George Simmons again, and it’s where the two stories intersect and come together. Simmons goes on stage first, and he’s actually not very funny. He doesn’t tell the crowd about his illness or anything, but he’s. certainly more depressing than he is fun. And then Ira follows him and does a set in which he mainly makes fun of how bad Simmons was.

The next day, Simmons calls Ira and offers him a job. He wants Ira to come write jokes for him. And Ira, who doesn’t have very much going for him in his life, agrees. The two sit down together to discuss what this job will entail and then they hit the road, getting onto a private plane and heading out to a My Space celebration where Simmons performs standup for the companies employees. This movie takes its time with everything, and that includes seeing a little bit of every character’s set, each time the character does it. So back at that first night at the club, for example, we not only got to see the sets of Ira, Leo, and Simmons, but also a character named Randy, played by Aziz Ansari. It’s funny,  but it’s a little too much.

By the end of the first hour, we’ve got problems between characters and relationship issues. Ira, in particular, is having issues with the girl he likes (played by Aubrey Plaza, another Parks and Recreation veteran, along with Aziz,) because she slept with Mark. Not that she and Ira were ever dating or anything. He soon realizes that he has no right to judge her for doing this, since they were in no way together. And then there are issues between Ira and his roommates, in particular Leo, who finds out that Simmons wanted Leo to come write jokes for him too, and Ira never passed that message along.

All of this is great. The only thing the movie seems to be missing is a romantic storyline for Simmons. So what? There’s no reason why every character needs to have a story about romance, and we get enough story for Simmons even without that. His cancer story and way that he changes his ways, (for example, having his sister and her family start coming over,) is more than enough. But after a full hour and a half of the movie has gone by, we suddenly start meeting new characters from Simmons’ past, and he begins new relationships.

In particular, he rekindles a relationship with Laura, (Leslie Mann,) an old flame. Mann is Judd Apatow’s real life wife, and here she has two girls with husband Eric Bana. And, of course, Apatow is using his own two daughters for these roles, just like he did for Knocked Up and This is 40. So once again, like in those other two movies, Leslie Mann is playing the mother to her real life daughters. And the movie tries to get sentimental, showing us George run around with the kids and play with them like a father. It’s like watching a whole other movie. We don’t need this relationship. It’s not that it’s bad or anything, but it just makes the movie way too long. There are two movies here and the movie made a big mistakes by combining them into one. The first story is about the cancer and stand-up and job of Ira, as he becomes not just an assistant to Simmons, but also a friend. The second half is all about this long lost relationship, and George trying ton get it back, despite the woman being married and having two kids. The second half doesn’t quite fit with the first. It’s a good idea for it’s own movie, but tacked onto this film, it just makes the whole thing look and feel even longer, when it should have been coming to an end.