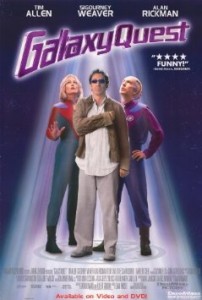 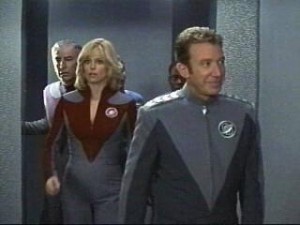 One Liner Review: a very funny and creative version of star trek meets the three amigos.

Galaxy Quest is a movie that’s based on a bunch of kind of ironic jokes. the jokes are ironic to today’s society, where trekkies dress up and go to star trek conventions and obsess over every detail of the made up universe as if it were real. Galaxy Quest has a lot of fun with that, and with the has been characters who used to be huge sensations, and then it spins it all on it’s head, by saying, what if it is real after all.

the first part of the movie is about the characters who are now kind of dead beats. tim allen was always the lead on the show, as jason nesmith. his character was the captain and he kept the crew on track as each one of them did a different job in the control room. and now, some two or three decades later (the show looks like it was clearly made in the seventies or eighties), these guys are all washed up.

Nesmith in particular is the most selfish and careless of the bunch. the rest of them are all pretty with it and unhappy that he books appearances for things without them. sigourney weaver, plays gwen, the only woman of the group and there’s a lot that goes with that, such as she and jason constantly getting questions about whether or not they ever had a relationship. i love that by the end of the movie, she is running around the ship with a shirt that is ripped open down the middle, showing her bra and all kinds of cleavage. it is just so ridiculous, like one of those movies where they have topless chicks in the background for no good reason at all in the plot.

other characters in the crew include alexander, the strange alien with a head that looks like his brain is on the outside, and tony shoulhoub playing the mechanic. there’s also an african american actor playing tommy, the driver (this is the only unknown actor of the bunch), and then a guy who was in only one episode, but now joins up with the team at the opening convention, played by sam rockwell.

after the beginning convention scene where jason ends up overhearing what his former cast mates think of him, and how some kids think he’s a big joke, he goes home and is ready to give it all up. he’s had it. this is an industry that can be unkind to people who don’t know when it is past their time. and then he gets a visit. this visit comes the next morning, and it’s in the form of four alien creatures who want jason to come with them to their planet.

of course he thinks the whole thing is just some kind of commercial or skit for a show and he goes along with it thinking that every bit of it is fake. this is where the movie starts to cross into three amigos territory. in that classic steve martin – chevy chase film, the guys were movie stars and when they were called into a real situation, they remained convinced that everything around them was fake. they thought the guns the bad guys were waving around were all prop guns and that lasted right up until one of them really got shot.

but then the movie has to deal with the issue of what to do once the characters are actually on board. now we are no longer in convention – reality territory, but in a total sci-fi outer space film. and this movie finds a way to navigate through that landscape too. it does this by having the characters face multiple challenges and enemies, starting with tommy having to get fly the ship out of it’s docking space and having a pretty hard time of it.

other challenges include cute little aliens that end up being more than they appear, a giant rock monster, and a cool looking big villain alien that seems to be a sort of cross between a lizard and a man. there’s a lot of action here, but it’s the humor that keeps us interested. every character has funny and has clever moments. a lot of it has to do with what their characters used to do on the show. alexander, for example, refuses to say his catch phrase, no matter how badly people want to hear it. and gwen is the one who talks to the computer and then repeats the computer’s response back to jason, even though he’s right there next to her when she hears it.

Galaxy Quest works well as a comedy. it’s creative and unique and really does a nice job of spoofing the star trek culture while at the same time giving us it’s own story. i love the way a young fan, played by justin long, can end up helping these guys just by using what he knows about the show and getting his fanboy friends to help out as well. every character really does have a lot going on here, whether it’s tony shalhoub, who is strangely okay with everything going on, or sam rockwell’s character, guy, who is convinced he’s going to be the first one to die. Galaxy Quest isn’t a great movie, because we never really feel the threats or challenges in the story line, the way we do in say jj abrahms star trek film. but as a comedy it works out really well and achieves some major success for originality and originality and creativity.