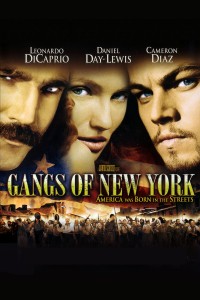 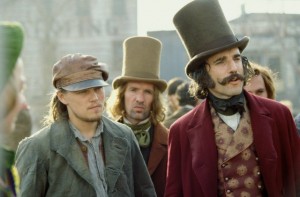 An impressive movie that delves into atmosphere and history while presenting colorful characters for its violent revenge story.

Gangs of New York was Martin Scorcese’s way of giving back in the form of history to the great city that did so much for him. like Woody Allen and Spike Lee, Scorcese is a New York director who sets most of his movies in that city. he is the go to new york gangster movie director. from Mean Streets to Goodfellas, he has worked the mob story in this city from every angle. and with Gangs Of New York, he’s trying something different. he’s takes this movie back to historical times and does a fantastic job of bringing that setting to life.

The movie is about the 1860s in New York, the time of the five points as an area of poverty and violence. the time when the civil war was all the news around town and the first draft in american history was being instilled. and put into that setting was leonardo dicaprio’s character, amsterdam. an irishman coming off the boat and landing in new york.

but the movie opened before amsterdam really arrived in the city as an adult. it opened on him as a child, walking through the mission building and caves with his father (liam neeson) in preparation for battle. neeson was a man named the priest, and he was the leader of the irish in new york city. his enemy was a man named bill the butcher, the head of the natives (pure americans), played by daniel day lewis. the movie begins with the march through the tunnels as more and more men join neeson’s walk and follow behind him, to the battle that starts up in the middle of the five points.

Not long after this battle, We are with Amsterdam as played by Dicaprio, arriving in New York with all of the others trying to escape ireland and the potato famine. There are so many irish there already, that they are quickly welcomed in. dicaprio meets friends his age and joins up with them (tommy from snatch and d’angelo from the wire.) And then it’s time to start getting close to bill.

the heart of this movie is a revenge story. dicaprio watched as a young boy as bill killed his father and now he wants vengeance. and to his advantage, bill does not know who he is. But to get in there, in bill’s inner circle, amsterdam has to pass a number of tests. one is to have a fist fight inside a tavern with one of bill’s henchmen.

Bill himself, as played by daniel day lewis, is a fantastic character. the best in the film. Day Lewis is a remarkable actor who transforms himself to fit a role. here, in gangs of new york, he is nearly as strong and creative as he was in there will be blood, which won him a best acting oscar. and it’s the same kind of role. a tough, chip on his shoulder, wise guy, leader and conniver of men. day lewis has his way with the character, making bill the butcher lively and memorable.

And then there’s cameron diaz as a prostitute who roams the streets with dignity. we never actually see her perform tricks on paying customers and she doesn’t seem to have a pimp. all of that works to giving her more pride than you might expect from this sort of character. and like both bill and amsterdam, she’s tough. i guess you kind of had to be to survive back in this city back then.

the movie is truly all about atmosphere and scorcese takes great pains to capture this city as it really must have been. that includes the dead pigs in the streets and corruption of tammany hall. For that, scorcese brings in jim broadbent to play the corrupt politician boss tweed. i always thought boss tweed was a big fat man who did whatever he wanted without looking back. but in scorcese’s film, he’s played by broadbent, one of the sweetest actors around, and he’s played as sort of a weakling who is afraid of the gangs and sides with whichever gang seems like it might have a chance to overtake the other. I liked seeing this very different interpretation of the character, and he helped to add to the toughness of amsterdam and bill the butcher as gang leaders who tweed wanted to make deals with.

As the movie goes on, things start happening pretty quickly. that’s because the film has a large running time and scorcese understands an audience’s patience level. So in just a few minutes, for example, we go from the proposition of an election, to the convincing of the candidate, to the election, to the results, to a politcal murder. and it all happens that fast. it’s not hard to follow, because it is so interesting that we’re with it for every moment and because the script includes dialogue that helps reenforce the ideas, just in case we missed anything.

And the movie ends with a fantastic climax, where just like true romance, enemy of the state, or any other tony scott film, multiple plot lines join together all at once for some chaotic action. it works here, because no matter what is happening all around them, both amsterdam and bill the butcher are determined to get at each other. and that really is what the movie is all about. dicaprio seeking vengeance on the man who killed his father, while in the heart of the dirtiest and most violent city in the young united states. Atmosphere in this movie is a character as much as anything else, with scorcese nailing the ideas of what life must have been like in this part of the city, including multiple fire departments that would both rush to a scene at the same time and then break out into fistfights, and uptown upper class citizens who looked down on everything that was happening around the five points. and all of this was taking place with news of the draft riots in the background putting everybody on edge. it was quite a fantastic and enjoyable movie.