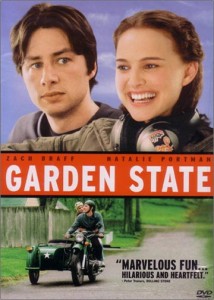 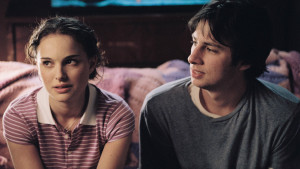 A funny, witty black comedy about a depressed young man who returns home to deal with issues from his past.

Garden State is a unique movie about a guy coming home to the town where he grew up and reconnecting with old friends, meeting new ones, and resolving issues with his father. It’s unique because in the grand scheme of things, it’s actually kind of simple, with the main character just hanging around and going out. He doesn’t have any mission or mystery to solve. His mission is simply to go home for a few days for his mom’s funeral.

Andrew largeman (zach braff), is the main character, and at his mom’s funeral he comes across some old high school buddies who work as grave diggers in the cemetery. Peter sarsgard is the main friend and he invites andrew to a party that evening in the mansion of one of their old buddies who sold an invention and became rich.

The party is fun, but andrew exists in a state of almost being comatose. There was an airplane opening where a plane was going down and largeman just sat there in his seat, completely expressionless. The scene was a dream or an image of what he was thinking about while lying on his white bed in his all white room in los angeles. That’s when he got the call from his father that his mother had died.

And that airplane image of him sitting there, unenthused by anything going on around him, is exactly the same kind of situation that is presented at the party as largeman sits in the same spot on a couch for the entire time. Zach braff wrote and directed this movie and he also chose all of the music. And there is some pretty amazing music here that really helps keep the movie running, presenting largeman staying still and the whole world happening around him.

The day after the party, andrew goes to see a doctor and talks of how he has been on anti-depressive, anti-anxiety medication for most of his life. Ever since he was about nine years old. his father (ian holm), is a psychiatrist and prescribed it for him. Largeman tells the doctor that he has decided to go off the medication and thinks he might be alright without it.

In the waiting room of the doctor’s office, he meets sam, played by the ever-fabulous and super-cute natalie portman. They talk it up a little bit and by the time he’s ready to leave, she’s out there on the curb waiting for a ride. So he gives her one on his world war II motorcycle with a sidecar attached.

the two of them then go to her house and meet her family and bury one of her pets. They have fun little interactions with each other, but it’s all just about them liking each other, and has nothing to do with a plot. That’s kind of the point. This movie doesn’t really have an agenda other than to get the two of them together. And because of that, it avoids all of the usual cliches of romantic comedies, like where one person makes a big mistake and then has to be forgiven by the end. This movie has none of that.

And that frees braff up to take his characters on little adventures, like that night when they go to the mansion again and this time jump into the pool and then dry off by a large open fireplace. Or the next day, when sarsgard takes them all around town to pursue something that he is keeping a surprise from them. They end up in a secret hotel room watching people who are watching other people have sex, and then down in the middle of a quarry where there’s an old boat just sitting there and a man who lives in it with his wife and child.

The movie works because throughout all of the simple observations and ideas (at one point he sits in a bathtub with portman talking), it is actually very deep and poetic. In the deep department, there are the unresolved issues with his father and back story about what andrew did when he was a kid. And in the poetic area, there are lines and ideas sprinkled here and there. Like the knight from medievil times who spends the evening with sarsgard’s mom, and then sarsgard’s comment about him that “he’s just a fast food knight.” Meaning that sarsgard is the real thing. Or when largeman says to the man in the boat, “good luck exploring the infinite abyss,” and the man says back to him, “you too.” Meaning life is an infinite abyss.

Garden State is a movie that makes observations about material things and situations (desert storm trading cards, a shirt made from the same fabric as drapes). while taking it’s character from place to place. He doesn’t really have an agenda and so instead he just comes across different interesting characters and every one of them gets there moment in the sun. From a high school buddy cop who used to be a coke head to a store salesman who is involved with pyramid schemes. but at the heart of the movie are three characters. Largeman, his best friend, and his new girl. I love the way the relationship with natalie portman takes time to build and the way she even tells him when he first comes to her room, “we’re not gonna make out or anything.” It’s a movie that strives for excellence by keeping things either realistic or creative at all times, carried along by a wonderful soundtrack and some very poetic ideas.