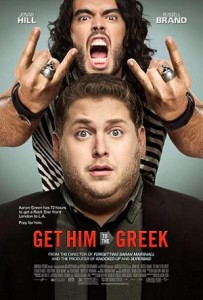 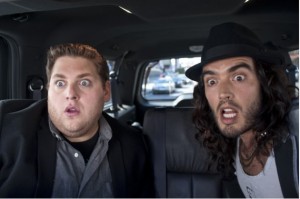 A funny, sexual, drug-fueled movie that delivers on it’s hard r rating while the main character tries endlessly to get a rock star to where he needs to be.

Get Him To The Greek is a very funny movie. That revelation was pretty surprising to me considering that before seeing this movie I was not a huge fan of most of the cast. Russell Brand was the most annoying part of the movie Forgetting Sarah Marshall and Jonah Hill, who is a natural talent when he gets to be crazy like in Superbad, seems to be playing the straight man in this movie. other than those two, the rest of the cast consists of p. diddy, who is not much of an actor and mad men’s Elizabeth Moss who is also pretty new to the game. so from a casting perspective, there were a lot of reasons why this movie shouldn’t have worked.

and yet it did. and that’s because the casting does not mean all that much in the grand scheme of things. just look at how bad ocean’s twelve turned out to be despite having the perfect cast. what matters more are the behind the scenes guys. the writers, directors and even producers. and for this movie, they got good people to fill those spots. judd apatow produced the movie and his fingerprints are all over it, with the vulgarity, the movie references, and the gutsiness to go for a hard r rating every step of the way. and for writer / director, they got Nicholas stoller, the same guy who directed forgetting sarah marshall, which was also an outstandingly funny and clever film.

add those two names with the fact that the cast is better than can be expected with jonah hill really showing off his acting chops, playing the straight man to perfection while still getting tons of laughs. russell brand manages to actually be likable this time playing aldous snow, the same character he played in sarah marshall. and p. diddy is pretty funny too as the tough talking boss of a record label.

The other reason why it looked like this movie probably wouldn’t work is because the plot seems relatively simple. an average guy needs to get a drug addict rock star on a plane and to america to do a concert. not much too it. but what i’m finding out these days is that a lot of times the less complicated the movie the better. two out of the last three films i saw were too complicated for their own good. the movies were the other guys and knight and day, and both would have been wise to have kept things simpler. get him to the greek does exactly that and it works for it perfectly.

just like forgetting sarah marshall, which spent a lot of time in the beginning showing off the celebrity character through her t.v. show and also through interviews with the media, this movie does the same thing for aldous snow. the film opens with his music video “african child,” which is both offensive and funny. we move from there to interviews on the set of the movie with both aldous and his long time girlfriend, jackie Q. and after that, we watch a series of tv reports about how aldous gets out of control as the album turns out to be a big disaster. it’s all very funny as aldous does some totally outrageous things. he masturbates on the red carpet, pulls down his pants and start urinating during an interview, sits there while jackie talks about how he can’t get it up during an interview and then watches as she spreads her legs and flashes the camera. on top of that, aldous deals with questions about his father taking credit for his son’s talent and responds with comments about his father’s sperm and how as soon as he ejaculated, his contribution to aldous’ talent was over. all of this comes before we even meet the jonah hill character. it sets the movie off on the right foot.

when we do meet the jonah hill character, aaron green, he’s waking up in bed with his girlfriend, elizabeth moss. she’s an er doctor and she’s just crawling into bed covered in blood. she comments on how somebody’s heart exploded and it was like something out of saw. later on there are references to michael jackson, middle earth from the lord of the rings movies, and even harry potter. that’s one thing apatow movies certainly got right over the years. their references to other movies. apatow knows that his audience is made up of young males who are comic nerds and know all this stuff and love it. remember knocked up with them talking about back to the future and total recall and wild things?

the movie goes on to have aaron propose his idea to bring snow back for a ten year anniversary concert at the greek theater in los angeles. but before his idea can come out, we get some very funny hard-ass boss stuff from p. diddy, sitting behind his desk, talking to a room full of his employees. he berates them and has fun with it. when one guys’s phone rings, p. diddy’s character sergio makes the guy answer it, talk to his friend, and then hang up and throw the phone out of the office. when another guy says that he found the next alicia keyes, sergio confronts him with questions about who the last talent he signed was and how many units this artist sold. in another movie, this might be painfully negative, but here it’s funny because of the way these weaker characters react to him, keeping straight faces and mumbling things under their breath. Not only are sergio’s comments funny, but so are the ways these guys react to him.

as the movie goes on, this sort of thing happens more and more. and it’s always pretty funny. when aaron and sergio sit down for their meeting where aaron will get his mission, the scene does not go smoothly. sergio talks about mind-fucking him and then spells it out, asking if aaron can feel his dick going into aaron’s mind. then they talk about how much they hate snow’s album african child, but how to convincingly make it sound like they don’t . it works because it’s all done with such anger and ferocity. sergio doesn’t laugh with aaron about how bad the album was, he shows aaron how to convincingly lie about it while at the same time getting angry at aaron for even asking him about it.

Nick stoller is a very talented filmmaker. forgetting sarah marshall showed that, but this movie proves that it was not a fluke. stoller surrounds the characters with conflict everywhere they go which really amounts to a bunch of humorous situations. when aaron shows up to pick snow up in london, he meets snow’s assistant. then they go to meet snow and the assistant pretends like he knows nothing about the concert being pushed up two months. when aaron tells the man that he just spoke to him about it, the assistant looks at aaron and says “i’ve never seen this guy before in my life.” this kind of ridiculousness is very funny as long as there is a straight man there to be as confused as we are. hill pulls it off nicely.

other conflict situations include getting drugs onto a plane by having to stick them up somewhere, a father who goes on a violent rampage, and a girlfriend who is interested in having a threesome despite her boyfriend’s objections. the movie uses dialogue to convey very graphic sexual images, such as maggie q talking about how aldous went down on her or putting the phone next to her vagina. or a groupie girl who pretty much rapes jonah hill, but before doing so shows off her region to him and makes comments about how hairy it is. “want to sing some hairy-oke?” all of this is graphic, but in a fun way. especially since it is so crazy and unexpected. when aaron and snow take absinthe together, the scenes that follow of hallucinogenic experiences are as funny as anything else in the movie. especially when p. diddy’s heads appear and start eating each other. this movie might have a simple premise, but it is loaded with funny ideas. it even invents it’s own vocabulary including a type of joint called a jeffrey and a soft, shaggy carpet that hangs on the wall and is for petting. this movie is loaded with funny ideas, crazy situations, and outrageous sexual humor. it isn’t an amazing film, because it’s plot is nothing special, but as far as comedy goes this movie certainly knows what it’s doing.