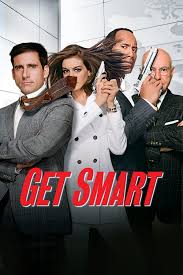 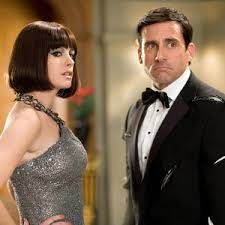 There are enough funny jokes here to make this thing enjoyable, but the longer it goes on, the more tiresome and repetitive it gets.

For a campy, somewhat funny, laid back kind of time, you could do a whole lot worse than this one. That’s not much of a glowing compliment, but the movie is fun. It’s just nothing special. Steve Carrell is the star here and he’s a natural talent. Especially when he’s playing a goofball like he is here. He’s partnered with Anne Hathaway in one of those idiot and the girl who roles her eyes at how stupid he is kind of relationships, but as cliched as it sounds, in this movie it works. So does the sort of spoof version of a James Bond movie, complete with evil corporations and weapon gadgets. The villains are pretty weak here and the story is just okay, but it is the comedy that keeps this thing going.

Get Smart is a light-hearted, sometimes funny movie. For the most part, it works. And that’s due to it’s likable cast. Steve Carrell headlines this thing, and he’s a natural talent. He generally plays characters who are idiots and does it so well. And that’s exactly what he’s doing here, as Max Smart. Here’s a guy who has worked for the intel department of an American spy agency for years, and is just now getting his first chance to go out and be a field agent. There’s definitely a lot of learning involved and Smart isn’t exactly a quick learner.

The reason for his promotion is because the headquarters of the agency, called Control, has been attacked and bombed. And a list of agents has been stolen by the bad guys. It always seems to be this story, that a list of agents names has been stolen, from the very first Mission Impossible film all the way to today. That part might be cliched, but what is pretty cool is watching the good guy headquarters get blown up early on, (wait, that’s been done again and again too, and always at the beginning of the movie, from Rush Hour 2 to The Fast and the Furious 7.) But with this movie using it as the reason why Smart has to go out into the field, it works.

Right after the explosion, when Smart goes inside his smoke-filled building, the clocks his boss (played by Alan Arkin,)  in the head, by mistake, with a fire extinguisher, thinking he might be the bad guy. It’s through the smoke that Agent Smart strikes, when his visibility is down. And then, just like that, he’s promoted. He tries to use the cone of silence to put a forcefield around him where nobody can hear into it. He then starts celebrating the promotion, only to find out that the cone of silence isn’t working and everybody could hear him.

Max’s close friends at the agency are the tech guys. They’re the fellow nerds, like him, whereas the real agents, (like The Rock,) are the ones who get all the girls. This is similar to The Other Guys, where at one point we get to see the real detectives walk in and get everyones immediate respect and admiration. Those guys were played by Samuel L. Jackson, and coincidentally, The Rock. And Max is about to become one of these guys, getting out there, right into the heart of the excitement.

Before he does, however, he has to deal with the ridicule of two of his colleagues, and this is some of the funnier stuff in the movie. David Koechner and Terry Crews play experienced field agents who laugh at Max, and his pathetic little job. They mock him as often as they can, even when he’s giving a presentation. And they get their butts kicked with guys who hear them and demand more respect. Guys like The Rock, and Patrick Warburton, (better known as Putty from Seinfeld.) The idea of two other detectives who are the trash talking competition on the force is common to detective movies, and this film slips the trademark idea right into a spy movie nicely.

Smart is given a mission to fly overseas to a factory where the terrorist organization, KAOS, is supposedly making bombs. He is also given a partner, Agent 99, (played by Anne Hathaway.) The fun of how incompetent and idiotic Smart is, begins while on the plane. He notices gum on the bottom of his shoe and tries to get it off with a match. One of the passengers yells that he’s trying to light his shoe on fire, and Smart is talked to the ground by an Air Marshal. He is handcuffed and placed in a front seat. In order to get out of the handcuffs, Max uses the bathroom, where he tries to fire a dart tied to webbing from a crossbow pocket knife he has. The dart goes everywhere but the handcuffs, and ends up going through Max’s skin a number of times in different spots.

Max finally gets the handcuffs off, but not before opening the eject hatch, built for spies on the plane. In the bathroom, there is a secret panel behind the mirror, which contains parachutes and helmets for spies. After Max has been ejected from the bathroom, Agent 99 goes to check up on him, only to realize he has been ejected from the plane without a parachute. Now it’s up to Agent 99 to jump out and rescue him. Only the two of them have company in the form of a henchman who has also jumped from the plane, and is on their tail.

The plane turned skydiving scene is just the start of Smart and 99’s challenges together. The next one comes at a ball. It takes  place at the home of the villain they are tracking, and gives us some pretty great sequences. Mainly the dance sequence and the laser sequence. The dance number scenes is creative and new. It involves Smart showing up Agent 99 and the man they are tracking where he takes the dance floor with an overweight woman and performs some crazy moves with her, despite her size.

From here it’s the laser scenes, which we’ve seen again and again in movies like Ocean’s Twelve, Jay and Silent Bob Strike Back, and Entrapment. This is the first time, however, that it is played strictly for comedy, and it works. Especially once a rat gets involved and makes everything a good idea more difficult. But after the dance and lasers scene, the challenges stop being as much fun. They make it to the factory, find the villains they are after, and nothing much comes of it. The way Smart gets out of a rooftop fight with one villain is pretty stupid, and the other villains here are completely forgettable.

Terence Stamp plays the cheater who is meant to be the main villain and has of Kaos but he doesn’t really do anything here that makes him stand out. And he doesn’t get treated like a main villain either, with him pretty much not appearing at all in the climax. Instead, this movie gives us what is meant to be a twist ending in terms of another villain they are up against, and suddenly puts all it’s attention into that, forgetting entirely about the Stamp character. The movie definitely loses steam in its second half with three ideas and locations that don’t quite work. There’s the bread factory, the act of Max being imprisoned by his own team, and the new villain reveal. None of it matches the comedy of the first half. The movie is still pretty good, but not nearly as good as it could have been.