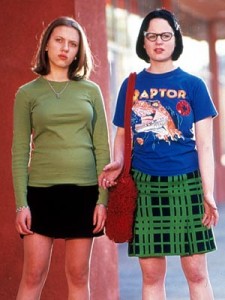 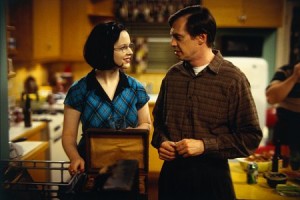 A very dark and yet interesting movie about a teenage girl who just graduated high school and now has to figure out what to do with herself.

Ghost World is a different kind of movie. to call it a black comedy would be going too far. it is certainly black. but exactly how much of it is comedic is often hard to tell. mostly it’s just a strange and compelling film about a girl who thinks she’s on top of the world until she realizes that things are never neat and simple.

the movie is about Enid, (Thora Birch) who is graduating high school and not quite ready to figure out the rest of her life. enid is one of those free spirited indie chicks. she’s the kind of girl who probably liked to burn things and watch them melt when she was younger. she is definitely artistic, although she has no idea what to do with that or if she even really wants to pursue it.

Enid and her best friend, Rebecca (Scarlet Johansen in her first notable movie role), want to get an apartment together and enjoy being young and done with high school. neither one of them plans to go to college, and they are much more content to hang out with Josh (Brad Renfro), who works at the local convenience store, and make fun of people all day.

that’s how they get started on the first and really main plot line of the film. it involves a guy who wrote an add in a newspaper saying that he shared a moment with a woman on a plane and hopes the woman felt the same way about that moment, reads this add, and contacts him. enid and rebecca can’t resist taking advantage of this pour guy, and in a move that feels like the kind of thing neil labute’s early movies used to be all about (in the company of men, the shape of things), they play a prank on him.

the girls call this guy, seymour (steve buscemi), up and pretend to be the woman. they ask to meet him at a diner and once then the girls go and stake the place out. they sit there in a booth with josh and watch as this sad soul comes in, sits down, orders a milk shake, and waits. i’m not sure what they expected to see, but by the end it’s pretty sad.

and enid feels terrible about what happened (that’s where this movie veers off the neil labute track). she won’t admit, but she now wants to be nice to this guy, and is also incredibly curious about him. she goes and finds him at a garage sale and talks to him about his records. after that, the two of them start a friendship and she actually helps transform into a somewhat cool guy.

a lot of this is standard stuff. we’ve seen the prank or secret at the beginning of a film, that a whole relationship is based on. that goes all the way back to Shakespeare with the taming of the shrew. and we’ve seen movies about a younger character helping an older character transform and become cool. most recently this happened in the movie crazy, stupid, love, with steve carrell and ryan gosling. but the third act of ghost world is where things become really unique.

when seymour ends up finding a girlfriend his own age, and enid ends up winning over her art teacher’s approval to the point where her teacher submits her name for a scholarship, any other movie would have been nearing it’s end. this would be a nice happy ending for all characters involved and everything would be wrapping up neatly. but it would also be kind of boring. that would be the ending that we’ve seen a thousand times before. and so this movie takes all of it’s story lines into a completely different direction.

i’m not going to say any more about what happens, but just that as the movie moves away from the standard cliches and usual ways these films end, it also becomes a hell of a lot darker. the movie is strange enough as it is, but the ending puts it in a ball park all to it’s own. the characters here are rich and realistic and they are not exactly heroic or great, but at the same time, they’re not really terrible people either. i especially like josh, who isn’t happy with what the girls are doing when they pull their prank on seymour, but doesn’t seem to want to spend the energy to try and stop them. funny, then how seymour ends up taking his anger out on josh, the only one of the characters who knew that what they were doing was wrong, but didn’t do anything to stop it.

ghost world is directed by terry zwigoff, who is a very unique and dark director. all of his movies have been black comedies of sorts, and only one of them, bad santa, made it into the spotlight. ghost world was always an indie film and never showed up on most people’s radars. that’s too bad because the storyline is definitely creative compared to the usual everyday movie, that does make it into the main stream. it’s not a great movie, because in many ways it’s not all that exciting. nobody dies, for example. but it is something interesting and something that definitely feels real, and as a clever piece of entertainment, it most certainly works.