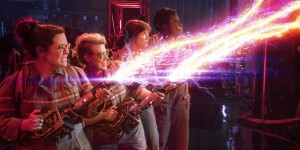 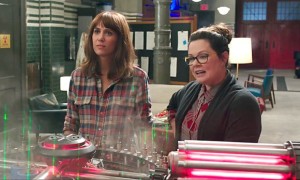 The storyline and the characters are fine, but this movie really isn’t funny, and that’s a problem.

Unfortunately, this movie doesn’t work nearly as good as it should have. The casting is perfect, and yet somehow the movie manages to screw up the roles that each actress is given. McCarthy, for example, doesn’t get to play the crazy one, and she doesn’t get to play the klutzy one. Leslie Jones doesn’t get to play the angry black woman. Kate McKinnon does play crazy, (which is what we want to see her do,) but she plays it in a quiet and subdued way. And then there’s Kristen Wiig, the best actress of the bunch, playing her ideal role of a shy, sensitive, and vulnerable type. The setups of her scenes are perfect, and yet none of these scenes is taken as far as it could go, or to the level of actually being funny. So much for slapstick, this movie seems to be in a rush to get from one scene to the next, not staying in one room or with one situation long enough to get the humor out of it. The storyline is very basic, but the effects and action are all pretty decent. The main problem is the lack of humor. Director Paul Feig knows how to do comedy, only his specialty, (like that of Judd Apatow,) is working with an R rating. Here, Feig doesn’t get to play in his usual sandbox of having that R rating and both the movie and its humor end up suffering.

The new Ghostbusters movie, starring Melissa McCarthy and Kristen Wiig, is exactly what one might have feared. It’s not that women aren’t funny, or that these girls can’t take on the challenge, or anything stupid like that. I have no doubt that these actresses could have been absolutely perfect for this movie. The problem is that they aren’t given roles that match their abilities and stengths . This is a PG-13 film, when it really needed to be rated R. Every one of the actors, (including the other two members, Leslie Jones an Kate McKinnon,) is playing either against their usual type, or else just not delivering, because of not being given enough to play with. And the director, Paul Feig, is making a movie that goes against everything he has made and had success with in the past.

Paul Feig is an rated R kind of guy. He comes out of the Judd Apatow school, (both of them made Freaks and Geeks together,) and his movies include Bridesmaids, The Heat, and Spy. Apatow has been Feig’s long time producer for those movies, and it shows. Now, considering those films that Feig has done such a great job with in the past, one has to look at the commonalities to determine how this director works best. There are two commonalties in Feig’s movies. One is Melissa McCarthy. The other is the R rating. Feig and McCarthy work because of that R rating and the freedom it affords them to have her say and do whatever she wants, and often be very offensive. Without the rating, the humor gets toned down, and the thing we love, about those movies, dies.

As if that wasn’t bad enough, two of the four characters here are not playing the kind of roles that we have come to love them for. Those two are McCarthy and Leslie Jones. McCarthy, in particular, as one of the two main stars of the film, (the other being Wiig,) really does a disservice to service by not being the crazy, over the top one here. She was the life of the party in each of her other movies. In Bridesmaids and The Heat, she was absolutely nuts, calling things like they were, and not holding back in any way at all. In Ghostbusters, she holds back. She is pretty much the most rational and down to earth one, and that’s a problem. Now McCarthy doesn’t have to play the crazy, hardcore character all the time. She can also take on the clutzy, falling all over the place, no confidence, Chris Farley role, like she did in the movie Spy. And that works too. But to have her be the quiet, calm one is ridiculous. I’m all for her trying something new, but maybe not in a movie like this, with so much riding on its shoulders.

Leslie Jones is the other actress who is not playing the role we want to see her in. Just watch one episode of Saturday Night Live and you are guaranteed to  see Jones pop up as the angry black woman, somewhere along the line. Often this happens in multiple skits during a single episode. And she plays that role perfectly, being both scary and intimidating. But not in this movie. She doesn’t even play something like the Ernie Hudson character in the original film, someone who doesn’t believe in this ghost business, but just wants to get paid, so goes along with it. Instead, Jones is all smiles here, and its a huge waste. In her one scene where she says something about being angry, “…but as mad as hell,” you don’t actually see or do anything mad. She just says it and moves on.

The other two actress are Wiig and McKinnon. Wiig plays the shy, sensitive one, and McKinnon plays the crazy one. In the case of Wiig, this works. It’s what she played in Bridesmaids, and she knows how to do this role justice. In the case of McKinnon, it’s not nearly as funny as it thinks she is. Yes, McKinnon designs all of the weapons, and has a free spirited, careless attitude about everything, but no, she does not do anything over the top or crazy. Her jokes are more quiet, like hiding in a department store and having her head look like one of the dummy’s heads. McKinnon is definitely playing the kind of role she should be, (the crazy one,) but why is she playing it so quietly, when what we need is a character who is over the top? We need the physical comedy, and if we’re not going to get it from McCarthy, then we really need to get it from McKinnon. Only we don’t.

Wiig is the actress who does work in the movie.That shouldn’t be such a surprise, because she is probably the best of the four actresses on screen, here. She is certainly the one with the most under her belt. And Wiig’s character’s storyline, at the start of the movie, about being a professor who is up for tenure, and fearing that this book she wrote ten years ago, about paranormal activity, might hurt her, is pretty good. I especially like when Wiig tries to hide the computer screen from her boss, (Charles Dance, of Game of Thrones,) when it is displaying an image of her and the book on it. But this scene could have gone so much further. It’s really just a quick moment of her putting something in front of the monitor, but why not play it out and milk it for longer? The scene could have had her try to click off it, and only lead to other things popping up. It could have had her try to kick out the wire, and accidentally start a small fire. There are all sorts of directions where this scene could have gone, and didn’t.

The same can be said of a scene that proceeds this, when a man comes to visit Wiig, wondering if she is the author of the book. Wiig says no, and tries to deny it, but as soon as the man turns to the profile picture on the back flap, she admits that its her. Why not play around with this scene more, having Wiig try to change her hair, and put on glasses, maybe even hunch her back over or something? This scene, as well as the computer monitor one, are the kinds of scenes that would be funnier the longer they went on. As the audience, we know the character’s goal and motivation, and now we want to watch all the ways she tries to accomplish them, that go horribly wrong. Instead, the movie rushes to get in and out of these scenes, not taking advantage of the setup, to make sure that the moments actually deliver on the humor.

Wiig does have one very funny moment, also towards the start of the film, where she says the name of the man who came to see her, and the tour guide at the house that is haunted says that this man has been dead for over a decade. Then the man who came to see her walks up, and the guide says that this is the man’s son. Wiig’s response of, “that’s obviously who I was talking about,” is priceless. Similarly, McCarthy has one funny part too, involving the Chinese restaurant that brings take out to her and only gives her one won ton in her won ton soup. These moments definitely work, but they are quick and to the point, and the movie needed a whole lot more of them.

The storyline is pretty straight forward, about ghosts popping up in the city and these girls going out on the calls. There’s nothing unique or creative about this story, including a pretty dull villain who was bullied in the past, and now wants to release ghosts everywhere. Even the idea of a mayor, (played by Andy Garcia,) who knows the girls are telling the truth, but has to keep pretending like they are not, to the press, is funny in its setup, but could have been a whole lot better in its execution. Garcia should have been saying terrible things to the press about these girls, like that they are “raping the minds of America,” or something like that, causing the girls to look at each other, like, is this guy nuts? But that’s the problem here. No scene is carried out as far as it can go, jokes are setup, but not delivered on, and the movie really refuses to take any risks.

Chris Hemsworth shows up as the secretray and his role is as one-noted as each of the women’s here. Hemsworth is the good-looking guy who is as dumb as a bag of hammers. He thinks his eyes are his ears, so that if there’s a loud and unpleasant noise, he covers his eyes. This kind of thing is funny at first, but gets tiresome pretty fast. Especially since there’s not much else to grab onto. While the humor isn’t there, the same way that it should have been, and the story is nothing special at all, the effects and action are kind of fun, so at least the movie has that going for it. And there are also a whole lot of enjoyable cameos. It’s just that this movie had so much potential and could have been so much better. It was given the dream cast and the dream director. If only it had also been given the dream rating.