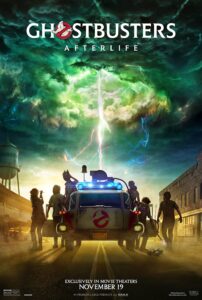 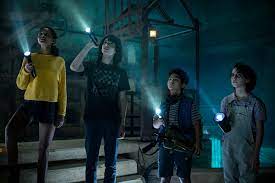 A movie packed full of references to the original, meant to exist in the same world and feel the same way, this one combines comedy and scares nicely to pull off a nearly impossible task.

Now here’s a movie that pulls out all the stops. Talk about making references to the original film or fan service or whatever word you’d like to call it (Easter eggs, homages,) this one goes all out. And it’s not just little winks, but is more about having the same feel. The same combination of light-hearted comedy combined with scariness. And it does all that while telling a new story featuring new characters who are teenagers. We’re talking about Goonies meets the Monster Squad meets Super 8 territory. There are some questionable ideas and moments from time to time, but for the most part this one really works.

Ghostbusters Afterlife is a really solid movie. It literally does everything you could hope for in terms of nostalgia and references to the past. It tells a good, interesting story. There’s some great humor. They even use the perfect background music for the small, light moments, just like the first movie did. And yet, something does feel missing, when comparing it to the original films. And that’s what this one is meant to be compared to. This one is meant to be put right up there on a pedestal with Ghostbusters 1 and 2, and it pretty much succeeds. To compare it to the first movie alone is kind of unfair territory. After all that first film caught lightning in a bottle. Even the sequel featuring the exact same cast and director couldn’t replicate it. So to now have a movie with a completely new cast that tries to capture the same tone and references be just as good, is not very likely. And yet this movie in many ways comes close.

The movie is about Egon’s family. In fact, it opens with Egon, the original ghostbuster that was played by Harold Ramis. The real life actor, Ramis, died some years back, and so we never see his face in this opening. But from everything else happening, we can tell who it’s meant to be. Egon drives a pickup truck at rapid speed over an old creaky wooden bridge. Then he crashes the truck into a cornfield. The truck flips over, but Egon gets out and goes running for an old farm house in the middle of nowhere. And there he stands, on the porch, waiting for a ghost to emerge from the stalks of corn. When it finally does, Egon’s trap doesn’t work, and he ends up going into his house and locking the door. Only the ghost still gets him using an arms-coming-out-of-the-chair method similar to what got Dana (Sigourney Weaver,) in the original Ghostbusters movie. And that ends the opening sequence.

The chair arms is a nice reference, but it’s also barely shown. And that’s pretty much the story of this movie. The references are there, but the scares aren’t. Not like they were in that first movie. The first movie wasn’t afraid to be scary. When those arms popped out of the chair, you freaked out as they grabbed all over Dana, including covering her mouth. You got to see those arms in detail, all black and scaly. Here, they are on screen for just a brief instant. The same can be said of the Terror Dogs that arrive later. In the original movie, they were shown in detail as they turned their heads from side to side roaring with drool dripping down their mouths. None of that detail is captured here, and perhaps the reason for that is because it would be deemed too scary for kids. This movie is clearly hoping to cast a wide net, which means toning down the scares. Especially when you consider that some of the main characters are kids, themselves.

And yet, the movie does include plenty of scary characters and concepts. Just not shown in great detail, or combined with humor, which definitely detracts from the scariness. The reason, again, is for the kids. In fact, this movie very much goes for the same kids on a mission vibe that was captured by movies like Goonies, E.T., and Super 8. The common factor in all of those movies is Steven Spielberg. He mostly produced those films, only directing E.T. of the bunch. And he had nothing to do with this new Ghostbusters movie, but his mark is all over the film. So is the mark of original director Ivan Reitman. This new Ghostbusters movie is directed by Reitman’s son, Jason Reitman, who is an accomplished director himself. Jason made Juno and Up In The Air and Thank You For Smoking. He’s the right guy for the job, and his father was on set every moment of the way as a producer.

The movie features a great pace and some really fun characters. After the Egon sequence ends, we join a famuly (a single mother and her two teenage kids,) who are being evicted from their home in the city. There is some humor here, right off the bat, with the landlord. When Callie (Carrie Coon,) the mother asks him to give them more time, since she is going out of town to get her inheritance from her recently deceased father, the landlord tells her that he will wait until they leave and then change the locks. Once on the road, the humor and family dynamic continues. Callie talks to her kids about how her life is being uprooted too, just like theirs. The response is, “Your a mom. You have no life. You live for us.”

The two kids are Phoebe (Mckenna Grace) and Trevor (Finn Wolfhard of Stranger Things and It.) We even get some brother-sister relationship things between them, as Trevor asks Phoebe if she is working on her jokes to use for meeting kids at school. This is advice he is giving her, and a way that he is trying to help her out. And then the three of them pull up to a diner where Trevor gets out and goes inside, chasing after a girl he is interested in. He ends up applying for a job there. All of this leaving the group and wandering around is realistic and right on the money for what might actually happen. And it all helps develop the characters.

When the family arrives at the house, a tall, black mini-mansion that Trevor refers to as a murder house, they go inside and see a pile of books stacked to ridiculous heights. It’s like a Jenga game of balance, and yet the family doesn’t really question it. The stacked books is a reference to the first movie, in the library scene – first ghost sighting, but here the three family members end up experiencing a short earthquake and hiding under a table while the book stack remains in tact. And nobody questions this. So there are some minor bumps along the way as this thing gets going, but pretty soon we are meeting Paul Rudd’s character, Mr Grooberson, a summer school teacher who puts on videos for the kids to watch, and the humor continues.

The ghosts don’t really start appearing until the second half or so, and that’s okay. The first half is about the clues that lead up to them. The ghosts begin to come out when Phoebe, who is meant to be the scientist outcast just like her grandfather was, brings a ghost trap from her grandfather’s basement, into Mr Grooberson. The two of them, along with a boy Phoebe has befriended  named Podcast (and who is very funny,) take the trap out to the parking lot, try using the car battery from a bus to jump start it, and end up releasing a ghost. This is the catalyst that really gets things going.

Now it’s time for the training and getting ready. The movie takes its time with this, giving us a scene of Phoebe and Podcast trying out the proton pack and weapon firing, while Trevor works on the car.. the Ecto 1. Podcast also takes Phoebe to see a mysterious underground shrine or temple that was built by Ivo Shandor (the man who made the building in the first Ghsotbusters, and whose name we heard in that original movie.) The shrine is meant to call to and bring back Gozer the Destructor, the ghost from the end of that first film. And then we meet Muncher, this movies version of Slimer, and get a great chase through the streets with the kids driving the Ecto 1 and blasting away at him as a ghost trap drives around on a remote control car up ahead of them.

Has movie has so much great going on. The more we get into it, the more references we get, including those terror dogs and even Gozer, herself. We get stay puffed marshmallows (smaller versions that a pretty cute in the same way that Grogu or what many were referring to as “Baby Yoda,” was a cute version of the iconic character, on the Mandolorian.) The humor continues throughout the film, and while it is generally pretty solid, (“don’t be yourself,”) it does detract from the scares towards the end. Especially when Phoebe keeps telling jokes and even tells them to the movies scariest villain. But the movie does continue to build with excitement, and what it does with the original Ghsotbusters at the end is just fantastic. This movie isn’t perfect, but it sure is pretty great.