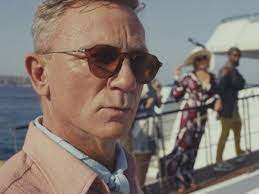 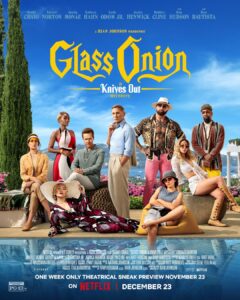 Another cool murder mystery from the Knives Out team, this one might not be quite as good as the first, but it is still packed with smart thrills and twists, and some great humor.

A genuine smart and engaging movie, this sequel to Knives Out delivers in all the right ways. It gives us a completely fresh and different story, packed with all new characters (other than detective Benoit Blanc,) and finds a way to make it nearly as great as the first. The setting this time around is a private island owned by a tech tycoon, as he sets up a murder mystery and invites his group of friends to come play along. The game within a game element, or murder within a murder, is handled in a very smart way here that includes layers (the onion references are all over this thing, whether you figure them out right away or not,) and unraveling. The characters are fun and the humor is sharp. The locations and hanging out vibe make us feel like we are on vacation with this crew. And the mystery definitely delivers.

Rian Johnson has done it again. This mastermind writer-director has once again proved that there’s no such thing as too smart or too witty, as long as there is a balance so that the audience can follow what is happening (as opposed to something like Tenet, which was too confusing.) Johnson has really built himself up in terms of a career packed full of smart movies. From Brick to Looper to his take on Star Wars, (he directed The Last Jedi,) he isn’t afraid to deconstruct pillars of what we expect and are comfortable with, even if it means making a few enemies along the way. Knives Out was his grand achievement, a movie that was so good it brought back a lost genre (the Who Dunnit’ murder mystery,) which other films had tried to revive through the year (Murder on the Orient Express,) without the same level of quality or success.

With Glass Onion: A Knives Out Mystery (the subtitle tacked on to let people know that this one is a sequel of sorts to that original, modern classic,) Johnson is at it again. What he has crafted here is a very different mystery that features all new players (other than the detective,) and yet still holds connections as far as storytelling and the way the mystery unfolds, to the original. Let’s just get the cat out of the bag right here and now… halfway through the movie, something happens that drastically changes everything. And it’s something so big that it makes you rethink everything that happened earlier. And that’s the calling card of this series, as the first movie did the exact same thing. Only unlike other sequels that repeat a story element from the first and end up feeling like carbon copies of what was done before, this one finds a fresh way to deliver the plot point and make us all have to readjust in our seats, as we are hit by a hard realization right at the perfect time.

Glass Onion is a great mystery, but it’s also a pretty fun comedy. This is the first movie to actually have fun with the pandemic, and show us how ridiculous the whole situation was, from a humor point of view. Characters either wear masks, forget to mask up, don’t seem to care, or show that they don’t even know what the masks are all about. Johnson literally uses the different kinds of masks each character wears to say something about each one of them (in the case of Birdie Jay’s mask – played hilariously by Kate Hudson, it says a lot.) We meet four of the main character of our ensemble, right in the heart of the pandemic, as they are quarantining (or supposed to be quarantining – again Birdie Jay,) and also opening a mysterious box together at the same time.

They do this via a phone call, which is meant to replicate a zoom call, with everyone interacting at the same time. But what really makes this opening so special is the box itself, packed full of puzzles and brain teasers and mysteries that they all must figure out together. And then there’s the humor of Duke (Dave Bautista’s) mother in the background, knowing all of the answers before anyone else in the group, despite there being a scientist among them (Lionel, played by Leslie Odom Jr.) There’s also Claire, a politician, played by Kathryn Hahn, on hand. But Duke and Birdie Jay are the standout characters here, and both are established from the very beginning and keep on going throughout every moment of the film. During the boxes opening scene, Birdie Jay tries to Shazam a song with a lamp, and talks about how she is throwing a massive party, despite the pandemic, because all of these people are “in her pod.” Her relationship with. her assistant, Peg, alone, is hilarious, as Peg is constantly running around putting out fires for Birdie… literally, like when a man juggling fire sticks ends up nearly burning down the place and Peg has to put it out. In the background.

Also, during the pandemic, we reunite with Benoit Blanc (Daniel Craig,) who sits in a bathtub on a Zoom Call with a roster of mystery-related celebrities (Stephen Sondheim, Angela Lansbury, Natasha Lyone, and Kareem Abdul Jabar who apparently now writes Sherlock Holmes books.) He ius playing the game, Among Us, with them, as everyone searches around a spaceship looking for the imposter in the group. This is part of a running gag about how Benoit Blanc might be the world’s greatest detective, but he’s very bad at playing mystery games. Clue, in particular gets called out and analyzed in this movie in one particular scene that is very much a blueprint for how this movie goes. Two characters discuss the objective of the game, “ticking boxes, searching rooms,” and then that’s exactly what ends up happening later on in this film. But for now, at the start,  Blanc is in his bathtub bored out of his mind, waiting for a real mystery.

He gets what he’s after when another one of those mysterious boxes is sent to him, complete with a metal onion model inside that contains an invitation. This invitation is to a weekend party on the private island of Miles Bron (Edward Norton,) a tech billionaire, manufacturer, and ideas man. He’s an Elon Musk-type which means a way of the future entreprenuer that many would call an eccentric genius. And Bron isn’t afraid to show off his wealth, buying cultural relics that have meaning and commissioning things to be built that seem impressive. From a dock made by the artist Banksy, to the guitar that Paul McCartney wrote the song, “Blackbird,” on, Bron doesn’t waste any time getting to show off his possessions when the character first arrive on his island.

They have to take a boat to get there, and its on this boat that we really meet the fifth member of their group, Andy, (played by Janelle Monae.) She’s not a wanted member of the group, for reasons we don’t exactly know at first, but we learn shortly afterwards of the troubled history between she and Miles that led to all members of the group betraying her in order to side with him. Andy being there makes everyone uncomfortable, but she’s there to prove a point, and to not let herself just be put out of their minds. She was a founding member of this group of friends, in fact she was the member who brought Miles in, and she won’t let them forget it.

And now, on the island, hanging out by the pool, the real fun begins. The series of mysteries. Who invited Benoit Blanc and why? That’s the first one, since it certainly wasn’t Miles. Then there’s the murder mystery that Miles has setup as a game for everyone to play. And then the real murders and mysteries follow. The humor is packed into every corner, from the way that celebrities either cameo of get referenced, (Ethan Hawke, Hugh Grant, Serena Williams, Jared Leto, Jeremy Renner,) to the quirks and stories about both Birdie and Duke. Birdie in particular can’t help but be offensive from her Jew comment to her blackface story to the sweatshop scandal. And the best thing about it is that she’s not doing it maliciously, but simply because she is an idiot. And Blanc calls her out on it, saying it is a mistake to confuse honesty with speaking without thought.

Movies that have mysteries within mysteries are always clever, and to a certain degree, that’s what this movie is all about. The Onion. The layers. The Glass Onion was a bar that the group of friends all used to hang out in, but Miles has taken the reference to the next level, constructing a giant glass building in the shape of an onion and talking about how it represents his past, present, and future. The real onion, though, is the mystery here. The movie might take its time getting to the murder, but it still moves at a breakneck pace, weaving us in and out of the stories and connections between these different characters, giving us all of the information we need before the murders actually begin. That turns out to be a very smart move. We feel like we know these characters before the chaos starts going down.

Perhaps the best thing about the movie is the way that the second half shows us tons of events from the first half again, replaying them from a different angle. Now, many movies have done this, from the Usual Suspects to the Sixth Sense, but it’s usually just a quick montage at the end to show us what we missed (and this movie has one of those montages too.) But what it really does is shows us the stories again, only the second time watching them from the point of view of a different character who was on the scene, now that we know the truth about who this character is. It’s a very clever move. This is a great movie that finds the perfect balance of humor and mystery, manages to tell a smart story without ever getting confusing or losing the audience, and allows the viewer to feel like a part of this group on this luxurious vacation. The movie doesn’t reach the height of the first film, but to do that would have been nearly impossible. Still, this one definitely excels on all levels.