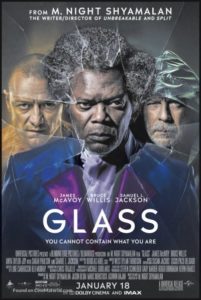 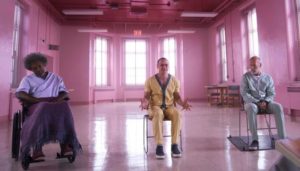 A bleak and stripped down look at the superhero genre, the real problem with this one is that it pretty much stays inside or around a mental hospital for the entire film, leaving the audience longing for something more.

It’s nice to finally have a sequel to Unbreakable, but one would hope that they would have come up with something better than this. The movie exists simply to put its three characters together. Which means in the same institution. And then the movie keeps them there for the entire film. And while there are some clever twists, especially towards the end, the movie keeps promising us that the characters have a bigger plan ahead of them to go somewhere that we can be pretty sure will serve as the climax. It never does. The movie never delivers on its promise to take the characters out of the institution, yet it keeps wetting our appetites for that by talking about it. The result is a pretty dull and depressing film. There are definitely some cool ideas here, such as any discussion about superheroes, and the way that each character has one person from their life who is there to speak for and help them. But the story is ultimately pretty weak, and the setting limits the movie was too much.

Glass is the long awaited sequel-of-sorts to Unbreakable. That movie from the year 2000, was one that made up the trifecta of director M. Night Shamalan’s three strongest film, (all in a row.) Those were The Sixth Sense, Unbreakable, and Signs. Shamalan’s strongest effort, at least in terms of popularity, was The Sixth Sense, but many people argue that his best movie was Unbreakable. After all, that film took a realistic look at Superheroes and what their lives might really be like. But then, after Signs, Shamalan started turning out lousy movies. First was The Village. Then The Girl In The Water. Then The Last Air Bender and After Earth. Pretty soon, studios started taking his name off posters, hoping the audience wouldn’t realize a movie was by him, since his name became associated with awful films. But then something unusual happened. This guys career has gone through major ups and downs, and he made the extremely low budget Indie horror film, The Visit, which met with lots of word of mouth success. From there, he made Split, another movie that didn’t look like anything special, but flew in under the radar and got people’s attention. Especially because of its ending.

Split was a movie about a villain with multiple personality disorder who kidnapped a bunch of girls. Think Kiss The Girls, only with the kidnapper being a guy with multiple personality disorder. So the movie showed us this character, Kevin, going from one personality to the next. These included him playing women, children, and a superhuman monstrous man called The Beast. And the movie ended with a twist that brought in Bruce Willis’ character from Unbreakable, David Dunn. It showed that Split existed in the same universe as Unbreakable, and teased another film that would feature these two characters together. That film turned out to be Glass, the name of the villain in Unbreakable, played by Samuel L. Jackson.

With Glass, then, we got the sequel to Unbreakable and also the sequel to Split. It was the third movie in a trilogy, but in many ways it felt like the second movie to both of those others, (that’s because Split definitely was not a sequel to Unbreakable.) So, through a weird experiment, Shamalan was able to connect two movies and drive the buzz for an Unbreakable sequel, nearly twenty years in the works. The experiment part came from all the risk he was taking. Just like with the Kill Bill movies and splitting them up, gamboling on the idea that the first one would be successful enough for people to want to see the second, Shamalan was gambling on whether or not Split would be a hit. If it was a dud, then a Split sequel might have been something that the studios wouldn’t want to touch. But the gambling and risk taking paid off, the movie was a hit, and it led to us getting Glass.

Unfortunately, Glass isn’t nearly as good as one might have hoped for. For one thing, it is an incredibly secluded movie, taking place almost entirely in a mental institution.For another, it keeps promising this big, exciting climax, that it seems to be building up to, and then thinks its pulling the wool over our eyes and giving us s twist when that climax never comes. That’s called disappointing the audience, not giving them a clever twist. Don’t promise them something you can’t deliver on. We’ll get to all that later. First, let’s start where the movie does… many years after Unbreakable and only a small amount of time after Split. We are able to figure this out, (especially with Unbreakable,) because Dunn’s son, Joseph, (who was a kid in that previous film,) is now an adult.

Joseph works with his father on helping with the vigilante business. The newspapers call Dunn’s superhero The Overseer. And Joseph is his “man in the chair,” who feeds Dunn intel from a secluded location, where Joseph monitors whatever Dunn is doing through computer screens and headsets. Dunn goes out looking for Kevin, who has now kidnapped four cheerleaders. Joseph is able to help Dunn track down the area where he believes Kevin might be holding the girls, and Dunn uses his power of touch to bump into Kevin, realize that this is the guy he’s looking for, and then figure out where Kevin is keeping the girls.

Dunn shows up to free the girls, but then Kevin arrives, transforms into the Beast, and we get a fight of The Overseer versus the Beast. Most movies in this genre would be waiting until the climax of the film to give us this fight, although there are plenty that give us a version in the beginning, (where the bad guy usually wins,) and then another version at the end, (where the good guy wins.) Think about it like a Rocky movie formula. There’s an early fight where the hero gets crushed, then the movie is about the hero training, and then there’s an end fight where the hero wins. Only here, it’s not that simple. There is no winner or loser of this first fight, because the police show up and arrest both The Overseer and The Beast, before either one could be declared the victor.

And now the rest of the movie takes place in the institution where Elijah Price, (Jackson,) is also being held. There is a psychiatrist there, Dr. Ellie Staple (Sarah Paulson,) who has a very specific mission. She needs to convince the three of them that they are not superheroes or super villains, and she has exactly three days to do it. Ellie first sets up room for Dunn and Kevin that they cannot escape from. Dunn believes his weakness is water (just like in Signs,) and so she laces his room with sprinklers that will shoot water at him if he tries to escape. Kevin believes that his weakness is light, and so she put strobe lights all over his room which will suddenly start shining if he tries to escape.

Ellie then tries to explain to each of them how their “incredible,” feats might have been accomplished by ordinary men. She explains to Dunn that he believes his weakness is water because he once almost drowned, and that his supposed “touch,” method for determining who is good and who is bad is more of a high intellect for putting clues together. For example, he must have noticed the marking on Kevin’s knees when they passed and the way that Kevin was behaving like a little child, and those clues, not the touch, told him that Kevin was his guy. What about the “sole survivor,” on a train situation and not having a single scratch on him, from the first movie though? This movie never addresses that. With Kevin, Staple tells him she found the footage of rock climbers he used to watch, on his computer, and how they were able to scale 90 degree vertical, seemingly impossible-to-climb walls. She also noted that the bars Kevin bent were extremely old, and that she was able to bend them too, using a tool.

All of this is pretty cool. Any time a movie tries to take the superhero genre seriously and rationalize how it might be possible, it’s entertaining. Christopher Nolan did that with his Batman trilogy, and Bryan Singer tried to do it with his original X-Men film, (made in the same year as Unbreakable, the year 2000, ironically.) But there are some downsides to how things are being done here too. Elijah, the character who the very title of the movie is named after, doesn’t even move a muscle in the first half. He just sits there, catatonic and immobile. And the biggest problem of all is that this movie keeps the characters in the institution. It’s cool that each one of them has one person from their lives who comes to see them and seems to have their back, (it’s Joseph for Dunn, Elijah’s mother for him, and very strangely the girl who was Kevin’s victim in Split, coming for him.) But it might have been nicer to see what these characters or anyone else was up to in the real world, outside of the institution.

Now, let’s be clear… a movie that takes place entirely in an institution could be pretty good. Look at One Flew Over the Cuckoo’s Nest. The problem is that this movie keeps promising us something bigger. One of the characters has an evil plan and that plan involves doing something in front of a live audience at a building that is being unveiled in the middle of Philadelphia, which will be the tallest building in the world. And the characters keep talking about this. They talk about the building and they talk about how there’s a chemical facility in the building that they plan to blow up. They are clearly setting this up for the climax, getting us all excited for it, right? Nope. Sure, it factors into the plot, the reason why they don’t go, and the movie will have us believe it’s a “twist,” that they don’t go, or part of the twist, but C’mon. Don’t promise us something and make us think we’re getting it and then not deliver. Basically, the movie seems and feels kind of dull with its determination to stay in the institution, and maybe that would have been easier to swallow if it didn’t keep promising us that something bigger was coming.