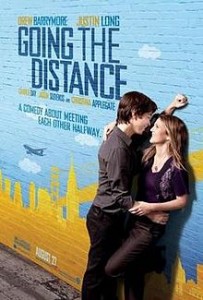 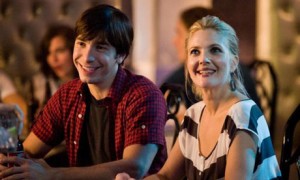 A lousy romantic comedy that tries way too hard to be funny and ends up hitting all the wrong notes.

Going The Distance is a very bad romantic comedy. For one thing, it really has nothing new at all to offer the genre. is it that this is the first movie about a couple trying to handle a long distance relationship, taking plane trips back and forth to the other side of the country to visit each other? I doubt it. and even if it is, what makes that movie material? Yes, it’s a real situation that many people have to deal with (I was one of them for about two years), but so what? Unless there’s something that can make this storyline interesting as a movie, than it’s not worth making. that idea would have been useful to the filmmakers.

The plot is about a guy with commitment issues and a girl who just wants to be a journalist in new york. Great premise. they meet at a bar one night and jump in on a trivia game at the bar. and they know all the answers. oh yeah, and they kind of bond over an arcade video game machine at the bar where drew barrymore’s character, erin, has the high record.

They go back to his place where they talk about their favorite movies of all time (was this movie seriously written by adults?) and then have sex. the only funny moment is when justin long’s roommate on the other side of the wall tries to dj their hookup, playing music to go along with what they’re doing. he plays “take my breath away,” from top gun while they’re making out, and then “I had the time of my life,” in the morning, when she’s leaving. that’s all very funny.

In fact, the best friends of justin long are the closest thing this movie has to being funny at all. charlie day plays the roommate and he is a hilarious human being (so funny on his tv show “it’s always sunny in philadelphia.”) He always acts like a lunatic with that high pitched complaining voice and crazy theories about life, but still nobody goes on ridiculous rants better. he is absolutely the best thing about this movie and the only thing that saves it from being completely terrible. Jason sedekis, from saturday night live, plays the other friend, and he’s got one or two moments, like his burt reynolds-mustache-time machine theory, but for the most part, the comedy seems to all come from charlie day.

and unfortunately, he’s not in the movie as often as he needed to be. in the first half he’s in it a lot, but only about half the things he does are really funny. the other half are either stupid or gross (like sitting on the toilet for a lengthy conversation with the door opened, talking to his friends). that scene was funny for a moment when we first saw him, and then went on for about five more minutes. each minute just killed the joke even more.

but the plot isn’t really about these friends. it’s about long and barrymore. he wants to be a record producer and works for a label, but is really just working his way up as a talent scout. there’s a funny moment early on where he’s called into his boss’ office (ron livingston, who is barely used at all in this movie), and asked to listen to a song called “I heart you crazy mad.” It’s a great moment as long gets disgusted by how awful the music is. and then livingston tells him he’s putting long in charge of representing these guys. for comedic purposes this is great. it means we will get to meet this awful band and watch long have more interactions with them, right? Wrong. this is the last we really see or hear from this band called 3Z. That’s it. there’s another snidbit of a moment where livinston tells long 3Z is in the next room waiting for him and long leaves the room to go meet them, and the movie cuts away to something else. it’s like this movie didn’t want to work. whenever it had something that possibly could work, like this, it cut away.

Instead we get ridiculously stupid moments like long and barrymore running into a house and having sex on the dining room table, even though she lives with her sister, the sister’s husband, and the sister’s kid. And they couldn’t find their way up to the bedroom? The next time the two see each other for the first time in a while again, when she comes to new york, they do go to the bedroom right away, and they don’t have sex. they just sit there and talk. but when there’s a dining room table there they have to do it. stupid. the whole scene is just to have them get caught by the sister and her husband.

There are tons of other awful moments in this movie. erin goes on a drunk rant at a bar. long goes spray tanning and gets sprayed in the mouth (I hear a friends episode once did this spray tanning scene much better with ross). All of it is just dumb. long comes to see her and sits down at her table at the restaurant where she works. and when she walks over to him, and is all surprised, his opening line is, “I’m not gonna order anything, but i have a tip for you.” She responds, “The tip of your penis?” And he says, “Yeah.” Who writes this stuff? Forget that it’s not funny, how about that it’s his opening line when he comes to see her and just surprised her at her restaurant.

the movie doesn’t really go anywhere either. when it comes to plot, this is all just back and forth. she comes to new york, he goes to california. she wants to get a job in new york, but can’t. long has interactions with a hot coworker, talking to her about her boyfriend and stuff, but none of this ever goes anywhere. he never hooks up with her or even flirts with her or anything. so what was the point of having her in the movie? To help fill time.

The movie has a couple of decent laughs in it’s first half, none funnier than charlie day’s dj routine. but there’s that 3Z stuff and a great one liner about how erin has an ass like the wind. There’s about one laugh every ten minutes or so, but all of that comes to an abrupt halt in the second half. suddenly the movie becomes infinitely less funny and more focussed on plot. normally this would be a good thing, but in a movie with such a lousy plot, all we really have is the hope that it will sometimes be funny. If that goes out the window, then there’s really nothing left to hold onto. the longer this movie goes on, the more painful it becomes to watch. it’s not the worst comedy around these days (adam sandler’s movies have got to take that prize), but it’s still pretty bad.