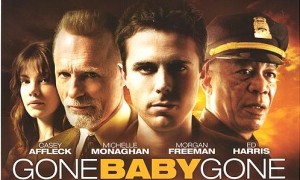 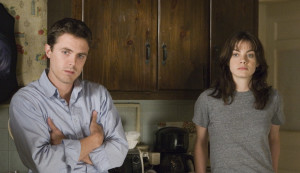 A gripping crime thriller that goes for the jugular by serving up not only an intense mystery, but also a hot button issue worthy of debate.

Gone Baby Gone is a fantastic mystery. it’s film noir at it’s finest, with a boston kidnapping of a small child and some young detectives who are hired because they know people who don’t talk to the police. these two characters, Patrick and Angie,  have grown up here on the streets of boston dealing with drug dealers and low lifes and even befriending many of them. the characters are played by casey affleck and michelle moynahan, and in the case of Affleck, the casting works out pretty nicely.

that’s because of a number of reasons. first off, the movie is directed by Casey’s older brother Ben. this is Ben Affleck’s directorial debut and it is a pretty amazing first entry. affleck is a natural talent as a director. his follow up film, the town, was just as good as this movie. both films take place in boston, where ben and casey grew up. and both actors were in good will hunting, one of the other great boston movies of the past few decades (the departed is probably the only other one, and that film stars the buddy of these guys, matt damon.) ben and matt, of course, wrote good will hunting together, and so really when it comes to boston movies, all of the pieces come together. either ben, matt, or casey stars in each one of them, and really either ben or matt has a hand in them all.

Gone Baby Gone is a movie that has studied other movies and then figured out how to use what those movies do best, and yet still be incredibly fresh and original. for example, there’s a scene towards the end of the movie where casey affleck and morgan freeman stand facing each other, arguing over possible future scenarios, that is very much right out of heat, with the Deniro  and pacino coffee shop scene. ben affleck is of course, a big fan of heat, and used it to inspire his movie the town, and so it’s kind of cool that he can take little things from other films, here and there, and that most people would never even realize it. he doesn’t borrow big, he borrow’s small, and that’s really the way to do it.

the plot of Gone Baby Gone is about this little girl, amanda, who gets kidnapped and the two detectives who are hired to find her. the cops, led by police captain morgan freeman, are on the case and seem to know what they’re doing. but the aunt of the little girl, played by amy madigan, hired patrick and angie because she knows that they can find things out that the cops can’t. i love that element of the story right there. these two are not necessarily moral, by the book, guys. one of patrick’s good friends is a major drug dealer who sells to people that do some pretty terrible things.

the first half of the movie is really about tracing clues. we meet the little girl’s mother, helene, played by amy ryan in the role of her career. ryan was oscar nominated for her performance here, and it’s a real shame that she didn’t win. tilda swinton won that year, for michael clayton, which was a great performance too, but maybe a little easier to be such a cold villain. with amy ryan, she was emboying someone who could actually be a real person. there’s not a single note in her performance that doesn’t feel authentic, and if she was a bigger name, i haveno doubt that she would have won.

ryan is the driving force of the movie, although casey is pretty great here too. this is his first real starring role, and it’s kind of hard to believe that the geeky kid from good will hunting could turn out to be the cool protagonist in a gritty crime thriller just ten years later. but affleck pushes hard to make us believe he can fit into this world. his voice isn’t always the easiest to understand, as he often slurs or mutters his words, but that’s the character. that’s the life. this is boston authenticity, not just some actor coming in trying to ham up a fake boston accent. if affleck slurs his words, that’s because that’s what this actor and this character would really be like. and it’s really not all that hard to follow what he’s saying. you get used to his tone and style and speech pretty quickly.

the mystery element of the film as patrick and angie start out at the bar where helene hangs out and go from there. at the bar, they start asking questions. it helps that patrick is old friends with one of the locals. and the questions lead him to knowing more about what helene was doing on the night of the kidnapping. turns out she wasn’t really telling the truth to anyone about what happened that night. but what she was really up to is only the first of about a half dozen secrets and twists that this movie has in it’s line of sight.

i love the way the characters follow clues here and put things together. i also love the way everyone has a motivation and half of these motivations aren’t what they really look like. ed harris shows up here, as one of the senior cops who morgan freeman puts patrick and angie in touch with. harris’ character, remy bressant, is a guy with a great deal of experience under his belt and no tolerance for bull shit. he has some interesting theories on life, from his take on what makes somebody from somewhere to his philosophy on planting evidence and under what circumstances commiting murder is acceptable.

the absolute coolest thing about the movie is the way that the mystery unfolds. it’s more than just following one clue after another like l.a. confidential (what i consider to be the best film noir of all time,) because this movie actually has the character hit a dead end and think the whole mystery is over. and then that situation is followed by a sort of red herring with another missing victim that has close to nothing to do with amanda. but it’s the little things that count, and if you pay attention to the names and details in conversations like our detective, patrick, does, then you see how he pieces it all together.

the second half of the movie is where things go from good to great. first there’s that dead end. then the red herring. and then the fake ending, where we think the whole mystery is over and we know the twist and the guys who were involved. and then we find out there was one more character involved and the whole thing goes even deeper. it reminds me of the usual suspects, where towards the end of the movie, you thought you know who the killer was and they even told us it was him, and you thought that was the ending, and then it went on to deliver us an even bigger surprise. the fact that this movie has elements of l.a. confidential and elements of the usual suspects (what i consider the absolute greatest mystery of all time,) and elements of heat (the greatest heist movie), is a testament to how smart it is. Gone Baby Gone works on all kinds of levels. if you watch the movie closely after knowing it’s ending, and you know the character motivations, you can even see how everything they say in their dialogue is meant to look like one thing, but really to lead the characters being spoken to, somewhere else. this movie is incredibly smart and interesting, and the fact that it ends with one hell of a debate worthy of heated discussion is just icing on the cake. what a masterful film!