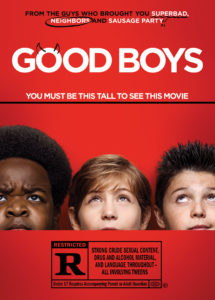 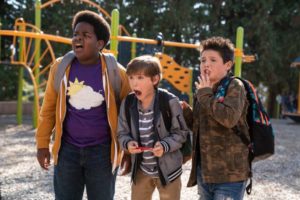 A cute, somewhat raunchy movie about sixth grade boys finding out about sex.

A movie loaded up with creative humor, this one might recycle some of the kinds of jokes we’ve seen before, but by setting them among much younger kids than we’ve ever seen as protagonists in a raunchy movie, the jokes feel new. The storyline involving three boys in pursuit of a drone that is possessed by two girls who want the drugs that the boys are holding, is actually pretty basic. There’s not a whole lot to it. But this movie uses that storyline to bring out lots of ridiculously funny ideas. A stronger story would have been nice, but the movie is definitely a lot of fun.

Good Boys is the latest attempt at a sex comedy from producer Seth Rogen. Over a decade ago, Judd Apatow changed the comedy playing field by introducing Rogen, Jonah Hill, James Franco, and a whole new brand of comedy. In more recent years, Rogen has become not just an actor, but also a writer and producer. And he continues to push the boundaries of where he can take his brand of humor. First, it was Superbad, about high school students, a movie that made American Pie look like it was for amateurs. Then it was Sausage Party, an animated grocery store sex comedy which found some very creative ways to connect jokes to food items. And now, with Good Boys, they’re not even looking at high-school kids. They’re looking at young middle school kids. Sixth grade. It’s a whole other ball game, and this movie finds ways to pull it off.

This is most definitely low brow, basic humor. But we’ve never seen this sort of thing from kids this young before. And it makes a difference. These kids are just so innocent. When they practice kissing on a CPR doll, for example, they have a long discussion about consent first. The age and innocence definitely play an important factor here, but we still get the same types of standard jokes. For example, there’s a masturbation joke early on where Max’s (Jacob Trembley’s,) dad, (played by the hilarious Will Forte,) walks into his son’s room right as his son is getting ready to go at it. And of course, it’s incredibly awkward as the father doesn’t realize what’s going on for the longest time. It’s the same joke we got in the beginning of American Pie, with a tube sock. But both Forte and Trembley treat it as if it’s brand new material, and it works.

The movie is about three boys. Max is the coolest, the smallest, and the one who is most interested in girls. He’s the one who the popular kids invite to their party. And Max finds a way to get his two other friends invited too. Those friends are Lucas and Thor. Lucas is a larger, black kid. He is the sweetest, most innocent of the three. And his parents are going through a divorce. That’s important because we see the entire story of if play out, from the start where his parents, (played by Lil Rel Howery and Reta,) sit him down and tell him what’s going on. Their take on it, about now getting to have two Thanksgivings and two Christmases, and getting to watch every episode of “This Is Us” twice, on two back-to-back nights, is hilarious. They try to make it sound like a good thing, but end up making it sound pretty terrible.

The third boy is Thor. He’s a singer. And he’s trying to get a solo in the school chorus. Only Thor gets made fun of by others kids in the grade and called “sippy cup,” as a nickname because they think he acts like a baby. This prompts him to put being cool ahead of everything else, including his own interests. And so he takes his name off the auditions list, and never tries out. His story is the most obvious of the three of them. Clearly his will be about learning the lesson to be yourself, and not worry so much about what other people think of you.

The story really starts when the boys are invited to a party. They know the game Spin The Bottle will be going on there, and there’s a girl who Max is really into and hoping to get to kiss. He even lets people in the grade know he likes this girl, and that he’s making something for her in art class. This is the kind of cute innocence that you wouldn’t get in a movie about high schoolers. In order to learn how to kiss, Max and his friends try porn, the CPR doll, and eventually decide to spy on Max’s neighbor, a high school girl who has a friend over. The two girls are in the backyard taking by the pool when a drone flies over the fence, into their yard, and right over to them. This is Max’s father’s drone, that the boys have decided to use it while his dad is out of town.

The drone situation ends up turning into the mission or chase of the entire movie. Basically the girls catch them spying, and capture the drone. The boys go over to meet the girls, face to face, and ask for the drone back. The boys fly the drone off, but it gets hit by a truck and destroyed. But the boys stole something from the girls while they were over there, at the house. It’s a purse with a bunch of random items in it. And one of those items is a container filled with the drug Molly. The girls want to get this back badly. So badly, In fact, that they go to the mall and buy the only other drone that is exactly the same as the one the boys broke, hoping to trade this drone for the Molly.

So to be clear, the girls go from having the drone that the boys want, to it breaking, to having the drone that the boys want again. It seems like a lot of extra running around by the plot, just to end up back in the same place. Similarly, the boys go from having the drugs to losing the drugs to having to go find the ex-boyfriend at his frat house and buy more drugs. So in a sense, the plot doesn’t really go anywhere. But the scenes that get us there are certainly funny. For example, the way the boys lose the drugs is in an encounter with a cop at a convenience store, where they keep confessing things to the cop, and clearly he just wants to be left alone, is hilarious.

Most of the movie is about this chase and pursuit. At one point, the friend of the girl whose house the boys were at goes after the boys in a foot chase that makes her seem like the Terminator. It would be kind of dumb, if it didn’t end so brilliantly with the boys seeking the help of stranger, telling them that this girl is trying to touch them inappropriately or something like that. The girl end up having to run away. There’s plenty of good humor mixed in throughout the film but at the end of the day, this is simply about getting the drone back. When the boys have to race the drone through neighbors backyards, in order to get it to their house, and to beat the dad home, who is sitting in a cab on his way home, it feels like something right out of the end of Ferris Beuler’s Day Off, with Ferris racing against his dad to get home.

The story might be simple, but the humor more than makes up for it. With three different protagonists, it’s actually helpful that the story is so simple, since there’s already a lot to take in. Three protagonists means three different stories, and some of them are certainly more interesting than others. Lucas, the sweetheart who believes love will conquer all, is by far the most likable and funniest character. But each one works in his own way. And by the end, they of course have the inevitable fight, and then getting back together that every romantic comedy or buddy movie has. This one isn’t big on creative storytelling, but it’s definitely big on humor and friends and finds the right notes for each of its characters, to hit.